Data center mergers and acquisitions boomed to $20 billion in value in 2017, exceeding the previous two years combined, as enterprises "focused more on improving IT capabilities and less on owning data center assets," according to a report from Synergy Research Group.

One significant M&A deal closed every week on average last year, with the largest being Digital Realty Trust Inc. 's $7.6 billion DuPont Fabros acquisition, according to a statement from Synergy Research Group Inc. this week. (See Data Center M&A Hit $20B in 2017 – Report and Digital Realty Deal a Strategic Expansion.)

Four other deals were valued at $1 billion or more, involving acquisitions by Equinix Inc. (Nasdaq: EQIX), Cyxtera Technologies , Peak 10 Inc. and Digital Bridge Holdings , Synergy Research said. Some 48 deals closed in 2017, compared with 45 in 2015 and 2016 combined. 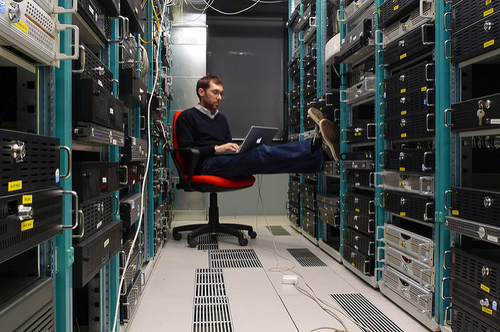 And 2018 is already off to a brisk start -- as of Tuesday, with the year in its second day, there were four additional major deals agreed to but not yet closed, with a total value of over $2.6 billion, Synergy Research said.

Digital Realty and Equinix, the world's two leading colocation providers, were the biggest investors in 2015-2017, according to the analyst report.

"Above all else, what is driving the data center M&A activity is enterprises focusing more on improving IT capabilities and less on owning data center assets," John Dinsdale, a chief analyst and research director at Synergy Research, said in a statement. "That shift is driving huge growth in outsourcing, whether it is via cloud services, or use of colocation facilities, or sale and leaseback of data centers. The dramatic growth of cloud providers is also driving changes in the data center industry, as data center operators strive to help them rapidly increase scale and global footprint. We expect to see much more data center M&A over the next five years." 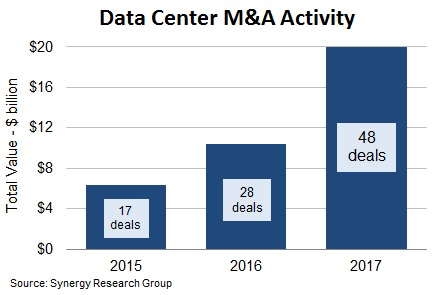 Not only is M&A activity booming for data centers, but the facilities themselves are proliferating. The end of 2017 would see nearly 400 hyperscale data centers around the world, with nearly half of them -- about 44% -- in the US, according to a December 20 report from Synergy Research. (See Hyperscale Data Centers Continued to Grow in 2017.)