At first, ex-Googler James Damore seemed like nothing special, yet another privileged twit mouthing off his stupid opinions, no different than a million other dopes you see on the Internet every day.

When it comes to political arguments, I've lately taken to heart a saying by Winston Churchill: "You will never reach your destination if you stop and throw stones at every dog that barks."

Damore was an engineer at Google, who got himself fired after distributing a ten-page memo arguing that women are underrepresented in engineering because of biological differences. (See Google Fires Engineer Over Gender Manifesto.)

It's not that I agree with Damore. I don't. His arguments are idiotic.

But (I thought) they're not worth giving time and energy to. They're just too trivial to bother with.

Fortunately, a woman did my work for me -- as women often do for men. Specifically, Cynthia Lee lays out the issues deftly in an essay on Vox: "I'm a woman in computer science. Let me ladysplain the Google memo to you."

"I'm a lecturer in computer science at Stanford," Lee begins. "I've taught at least four different programming languages, including assembly. I've had a single-digit employee number in a startup. Yes, I'm a woman in tech."

I have known, worked for, and taught countless men who could have written the now-infamous Google "manifesto"  or who are on some level persuaded by it. Given these facts, I'd like to treat it  and them  with some degree of charity and try to explain why it generated so much outrage.

At the outset, it must be conceded that, despite what some of the commentary has implied, the manifesto is not an unhinged rant. Its quasi-professional tone is a big part of what makes it so beguiling (to some) and also so dangerous. Many defenders seem genuinely baffled that a document that works so hard to appear dispassionate and reasonable could provoke such an emotional response...

That's me, by the way. The memo didn't seem, on first read, to be misogynistic. But Lee educated me.

...(Of course, some see that apparent disconnect not as baffling, but as a reason to have contempt for women, who in their eyes are confirming the charge that they are more emotional and less quantitative in their thinking.)

Lee describes several reasons why women are -- rightly -- agitated about the memo: "Fatigue" is one reason. Women are tired of putting up with this kind of nonsense. 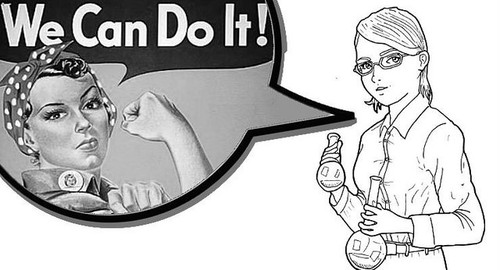 Secondly, says Lee: Women are resistant to the "divide and conquer" strategy; they won't be turned against their own gender. "Speaking for myself, it doesn't matter to me how soothingly a man coos that I'm not like most women, when those coos are accompanied by misogyny against most women," Lee says.

She adds, "The author says he's open to diversity, yet no real-world diversity-enhancing program meets his standards."

Another reason to pay attention to Damore is that he isn't just some random jerk on the Internet. He's a Harvard-educated Google engineer -- or he was a Google engineer -- supposedly one of America's intellectual elite. People like Damore need to be held to a higher standard than the ordinary monkey with a keyboard.

As to the facts that Damore asserts: They don't hold up to scrutiny. Women were in tech long before men; they pioneered computer sciences, notes. Holly Brockwell, writing at The Guardian. Ada Lovelace developed computer algorithms way back in the 19th century. Grace Hopper pioneered the first code compilers and Cobol. Margaret Hamilton "led the development of the onboard flight software for the Apollo missions and coined the term 'software engineering.' " And African-American women worked as "human computers" at NASA, working out the trajectories for the moon landing.

The fact is, programming was considered repetitive, unglamorous "women's work", like typing and punching cards, until it turned out to be a lucrative and prestigious field. Then, predictably, the achievements of women were wiped from the scoreboard and men like James Damore pretended they were never there.

Closer to home, we see women taking leadership positions in driving the industry today, and it's nowhere more evident than in enterprise cloud. Some of the biggest businesses in enterprise cloud are led by women: Diane Greene heads up Google's enterprise cloud business and co-founded VMware, which makes virtualization products that are integral to private cloud; Meg Whitman built eBay and now leads Hewlett Packard Enterprise, a leading provider of private cloud infrastructure; Ginni Rometty is looking to cloud to right IBM's foundering business. And Jayshree Ullal is killing it as CEO of Arista, driving blockbuster results despite the long shadow of a lawsuit from Cisco. (See Arista Surges 20% on Earnings Blowout, Google Growth Driven by Enterprise Cloud & Machine Learning, HPE Goes All in With Hybrid IT, and IBM's Cloud Strategy Helps, but Can't Stop Revenue Decline.)

When Damore has accomplished a tenth as much as these women, we can start to listen to what he has to say.

Michelle 8/26/2017 | 8:34:34 PM
Re: Also.... I agree. It's crazy to see how the profession evolved and what the leaders did as it grew (unfortunate they chose the path the did). We may finally move away from those bad choices.
Reply | Post Message | MESSAGES LIST | START A BOARD

kq4ym 8/26/2017 | 12:20:24 PM
Re: Also.... A compelling part of the explanation of what's gone on for decades might be in the statement about the early women specialists in programming as noted that, "programming was considered repetitive, unglamorous "women's work", like typing and punching cards, until it turned out to be a lucrative and prestigious field." The attitudes of management certainly can lead to weird practices for years and years after. Note the 'man' in management, noting even the words we use can lead us to sometimes move along the wrong road.
Reply | Post Message | MESSAGES LIST | START A BOARD

Ariella 8/15/2017 | 3:22:39 PM
Re: Also.... @Michelle, I'm sure all of us here value writing. However, in terms of market place value -- what the jobs are paying -- unfortunately, writing falls into the soft skills area that get you $30K a year upon earning your BA. In contrast, a BA in engineering can earn you $50K or more even for someone who can hardly write a sentence.
Reply | Post Message | MESSAGES LIST | START A BOARD

Michelle 8/15/2017 | 3:13:36 PM
Re: Also.... @Ariella There's so much ado about STEM, I wonder if kids are learning to write anymore. College students are terrible at writing (at least in my recent experience). There are few who are able to write well, but the rest really struggle to make sense. Have you noticed this? I think it's great to encourage STEM, but everyone needs to write well.
Reply | Post Message | MESSAGES LIST | START A BOARD

Ariella 8/15/2017 | 9:08:33 AM
Re: Also.... @Mitch No one is saying men are victims. His complaint was that he was not allowed to express any point of view that was not the one adopted by the company. And then the company essentially proved him right by firing him. That's why Google played this very badly. If you want to convince someone he's wrong, you don't achieveit by slapping him down for expressing his view. What you do achieve (and that is the tactic of totalitarian regimees) is striking fear in the hearts of others who may have liked to speak up themselves but now see the consequences. Again, that doesn't change their minds; it merely silences them in public.

BTW I taught for several years at NJIT, which is a very respectable state university for engineering. It was known to have more men than women students at the time. I just looked up the stats and found a report that still says it's 75% male.  Here are the numbers from https://www.collegefactual.com/colleges/new-jersey-institute-of-technology/student-life/diversity/


If you're seeking a institution with an equal number of male and female students, this may not be the choice for you.

At New Jersey Institute of Technology, the male to female student ratio is below the national average of about 40:60 with a student body that is predominantly male.

This institution is ranked at #2,271 in male to female diversity nationwide. The undergraduate population is comprised of 5,780 males and 1,770 females.

I have to admit that I am somewhat surprised.  I had thought that the programs to encourage women in the field were reflected in college attendance.  You have to realize that if the women graduating energineering schools make up only 25% then a reflection of that in the workforce would also show only 25% are women, not the half that they make up in the general population.

So is the school discriminating against female students? Perhaps. Perhaps they aren't enrolling because they weren't encouraged to do so by their high school teachers or even their parents. Or perhaps, every girl decides for herself what she wants to pursue, and it just happens that most choose something other than engineering and architecture. That's fine, too. As someone pointed out, no one seems to ever notice (though I do!) that women have even less representation in other fields like plumbing (check out Cluny Brown), car mechanics, and sanitation.

Ariella 8/15/2017 | 8:59:24 AM
Re: Also.... @michelle Alas, we have no mathematical inclination here whatsoever! I say "alas" because STEM jobs tend to pay about twice as much for entry level positions as the soft skill jobs do. Now that is not to say that I don't believe females are at all inclined in that direction, and as I've mentioned there are STEM careers in which there is a closer ratio or even more women than ment. I also have a niece who loves math and engineering and plans to make her career there, though I'm not sure which part of engineering she wishes to specialize in.

I tried to steer my daughter toward STEM, but she really only likes the MATH part. My son really enjoys STEM studies and has since elementary school (he'll start college soon).
Reply | Post Message | MESSAGES LIST | START A BOARD

As far as I can see, James Damore has contributed nothing to the world of technology other than going to Harvard and getting hired at Google. Whereas Diane Greene, one of the women he patronizes, reinvented the industry at VMware and is leading a business unit taking Google into the next century.

But Damore is now an alt-right star -- on YouTub, another YouTube business unit run by a woman.
Reply | Post Message | MESSAGES LIST | START A BOARD
Page 1 / 2   >   >>
EDUCATIONAL RESOURCES