The company announced Whitman's departure Tuesday, along with its fourth-quarter results.

"Let me just say, in closing: It has been the privilege of a lifetime to lead the company founded by Bill Hewlett and Dave Packard," Whitman said on the earnings call. "I'm proud of what we've accomplished during the last six years. We've laid out a strong foundation for a prosperous future, and now is the right time for Antonio and a new generation of leaders to take the reins."

The announcement comes just a short time after Whitman addressed rumors that she might take over Uber. In a Sept. 5 Hewlett Packard Enterprise earnings call, as those rumors swirled, Whitman said, "I've dedicated the last six years of my life to this company and there is more work to do... I am here to help make this company successful and I'm excited about the new strategy... So, lots more work to do and I actually am not going anywhere." (See HPE's Whitman Says She's 'Not Going Anywhere'.) 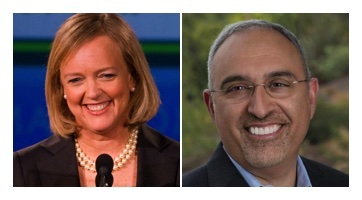 On Tuesday's call, Bernstein analyst Ton Sacconaghi said he was "a little surprised" by the timing of the announcement of Whitman's departure, in light of Whitman's previous statements. The timing "feels a little abrupt," he said, and asked Whitman if "there was a change of heart." The company's server business still has plenty of room for improvement, he said. "It's not obvious at this point that HP is at some ready point for a change."

During Whitman's tenure at HP, she focused on "shareholder value creation, financial restructuring, [and] ignition of the innovation engine," she said, "but the next CEO of this company needs to be a deeper technologist, and that's exactly what Antonio is."

Whitman noted that she's previously said the next CEO of the company needs to be both a technologist and an insider, and Neri fits the bill as a trained computer engineer with 22 years in HP and HPE, who's worked in every part of the company, starting out doing tech support in a call center. (See HPE Appoints Antonio Neri as President.)

During Whitman's tenure, she led splitting Hewlett-Packard into two companies: HP Inc., with a focus on the PC and printer business, and Hewlett Packard Enterprise, for which Whitman took the reins. HP and HPE created 220% shareholder value since the fall of 2012, with an 89% increase for HPE alone since the separation, which is three times the S&P 500, Whitman said on Tuesday's earnings call. Neri will lead the company through simplifying the business and executing strategy which Whitman and Neri put together jointly.

HPE sold off multiple parts of its business, in software and services, to focus the company on "hybrid IT," helping enterprises combine traditional IT, private cloud, and multiple public cloud, to drive business value.

Neri is a good fit for the top spot, Patrick Moorhead, president and principal analyst for Moor Insights & Strategy, said. "Antonio 'gets' the customer and understands what they want, how they want it, and when they want it. In addition, Antonio understands the technology and I think that pair is a good one, especially with the move to multi-cloud," Moorhead said.

What's next for Whitman?

So, don't count out Whitman popping up at one of HPE's competitors. After all, this is the same woman who said three months ago she's "not going anywhere" from HPE.

Susan Fourtané 11/22/2017 | 5:00:30 PM
Flash Efficiency Perhaps all that work that needed to be done was successfully and efficiently done in the last three months. So, now she can go somewhere. :D Or, somewhere else.
Reply | Post Message | MESSAGES LIST | START A BOARD

Joe Stanganelli 11/23/2017 | 1:00:23 PM
Whitman Around the time of the Uber news and her denial, I suspected that she had quietly put out feelers and was embarrassed by the news. This seems to fall in line with my original suspicions...even if she's not going to another company right away.
Reply | Post Message | MESSAGES LIST | START A BOARD

kq4ym 11/30/2017 | 8:43:18 AM
Re: Flash Efficiency And the old joke, how do you know if someone's not telling the truth...their lips are moving. I will watch to see if she really takes that time off and doesn't jump to a new job right away. It looks like CEOs are now trying to take the lead maybe over politicians in the tendency to not tell the whole truth?
Reply | Post Message | MESSAGES LIST | START A BOARD

[email protected] 11/30/2017 | 1:58:27 PM
Re: Flash Efficiency CEOs do have a shelf life and they often can't turn the ship completely unless the infrastructure is there. HP has some serious issues and they were playing catch up they are finally catching up to SaaS and other industry standards that they paid no attention to in the past. It will remain to be seen if an internal replacement will be able to change their direction fast enough for them to survive or if he will be mired in the politics of his years there.
Reply | Post Message | MESSAGES LIST | START A BOARD

Susan Fourtané 11/30/2017 | 4:36:06 PM
Re: Flash Efficiency Kq4ym, even though things may change in this case is seems to be quite unlikely. As you say, perhaps CEOs are following a tendency that is not sao good to follow. The problem is that how do you believe next time when she says something?
Reply | Post Message | MESSAGES LIST | START A BOARD

[email protected] 11/30/2017 | 5:57:50 PM
Re: Flash Efficiency Susan very true but CEOs are politicians of a sort, they don't necessarily tell the whole truth because their job is to package the truth to the board to the shareholders and to employees. Its the reality of the job and thinking that you are hearing 100% truth from an executive is foolish they are only saying what they have been cleared to say by PR, legal HR and a host of other communications people at the company.
Reply | Post Message | MESSAGES LIST | START A BOARD

[email protected] 11/30/2017 | 11:33:39 PM
Re: Flash Efficiency Susan Lies or euphemisms the different sides of the same stick. Sadly the truth is subjective these days and especially in politics and corporations that truth is questionable.
Reply | Post Message | MESSAGES LIST | START A BOARD

Susan Fourtané 12/1/2017 | 7:35:27 AM
Re: Flash Efficiency There is no point for corporations to play such games. They lose credibility.
Reply | Post Message | MESSAGES LIST | START A BOARD
EDUCATIONAL RESOURCES