DENVER -- NFV & Carrier SDN -- Telcos are eying their vast array of central offices and wiring facilities as natural locations for edge computing, a critical component for efficient content distribution, the Internet of Things and 5G. But a telco exec is warning here this week that converting some of those facilities into data centers of any size ain't gonna be all that easy.

CenturyLink Inc. (NYSE: CTL) has embarked on this process in multiple sites, Bill Walker, director of IT architecture, said yesterday in a keynote at Intel's Network Builders Summit. Thus far, it has found that outfitting some decades-old buildings purpose-built to support critical voice infrastructure can be cost-prohibitive. That is pushing the company to explore new options for using that real estate. 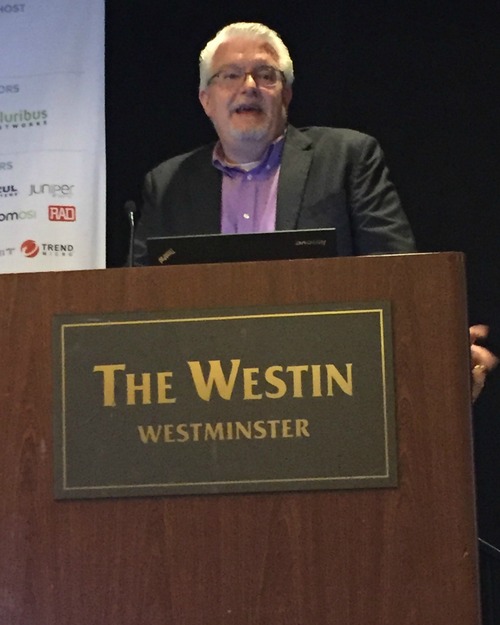 In Wednesday's keynote here, Walker elaborated on why it's important to be able to move the data center infrastructure closer to its customers, noting the need to generate new revenues, and not just reduce operating expenses. One key way to do that, he said, is to meet the growing demand for always-on, always reliable high-bandwidth services by pushing content closer to the customers and delivering it locally.

But that means putting data center infrastructure in places where it hasn't yet existed, such as telco COs and wire centers.

"We have over 3,500 COs today," he said. "Some of them are very interesting environments. The only thing left after a nuclear explosion will be cockroaches and central offices. They cannot move, they cannot evolve, the only way to rebuild them is to rebuild them around the existing building or else you are interrupting 911 service, emergency response and people's connectivity. So one of the real challenges of NFV is to deploy IT gear made for a specialized environment into these kind of rough environments."

Moving compute to the edge of the network -- not just to the CO but to the neighborhood -- is a critical step for the telecom industry, he added, as the surest way for network operators to get out of the fat, dumb pipe business. By distributing its data center infrastructure and offering compute and storage closer to the customer, CenturyLink intends to offer intelligent caching of video content and low-latency processing and analytics for a range of new applications. At the same time, it will be keeping traffic local, and not eating up valuable bandwidth in the costly fiber optic transport networks, Walker notes.

"So if we re-architect the services and move the data around, we can re-plumb the network to allow people to access the traffic, the content more efficiently," he says. "The combination of NFV and SDN is allowing us to architect services rather than us just being a pipe."

CenturyLink already did this with its TeraPoP sites, which are exchange sites at the edges of its core network, previously for cloud and traffic exchanges or colocation sites, he notes. There are now 58 TeraPoP sites globally, mostly in the US, that have NFV pods in them. The next step is moving this infrastructure into COs and then wiring centers at the neighborhood level and that's where it gets tricky.

"When you get down into the local wiring centers, down in the actual neighborhood a mile from your house, that is where value is to start delivering the services, but that is the most difficult place to start the engineering," Walker said. There are options such as building on top of existing COs, or immediately adjacent to them, but other options for the most local deployments are still needed.

In his keynote today, Walker explained why getting to new revenues remains the focus of digital transformation at CenturyLink. Having the ability to move software-based network elements around for maximum efficiency is great for reducing operational expense, but ultimately that's just a way to lose your job, he noted.

"If I promise my boss that I'll reduce opex by $20 million, it just means that next year, he just cuts my budget by $20 million," said Walker, who is director of network architecture for CenturyLink. "But if I grow revenue 10% ,15%, 30% per year -- the board will keep giving me money."

Walker also highlighted some of his best advice for managing the digital transformation process. That included adopting a "fast pivot" approach -- instead of fast failure -- that acknowledges when a given approach isn't working, even if the end goal is still a valid one.

"What you envisioned is probably not wrong, how you got there might be," he said. "Find a different path to do the same thing. Review constantly, revisit regularly, revise on-demand."

It's also important to choose the right tool for the right job, Walker said, and in the software world, that change will be faster. "You are going to change software features and sets but also vendors," he said. "It is going to evolve. The vendors we do choose, we have to support and give them feedback very quickly. We need to work closely with our vendor ecosystem."

What operators are building today will not be what their customers want in three years, Walker added. That means the architecture put in place today needs to have the flexibility to adapt to changing needs, and not lock operators into a limited set of options. That's where NFV and the ability to move functions around, and to re-plumb using SDN, comes into play for the future.

Duh! 9/28/2017 | 1:18:32 PM
Re: Edge Computing is Hard Interesting. I had understood that edge computing was premised, in part, on big open chunks of floor space in legacy COs. Convert commodity servers to telco form factor and environmental requirements(as OCP Telcos has been doing) and roll them into the space vacated by the 1A ESS. Power, HVAC, cable management are supposed to be all there. Slam dunk.