Intel says data center interconnect is one of the six pillars in which it is investing and that Barefoot has developed technology with the "programmability and flexibility necessary to meet the performance and ever-changing needs of the hyperscale cloud." (See this Intel blog for more on the strategic reasoning behind the deal.)

Key to that programmability and flexibility is P4, the programming language that Barefoot helped to develop and which is described as taking "SDN to the next level" by enabling the programming of forwarding planes. P4 is at the heart of Barefoot's Tofino switch chip that is designed to run at up to 6.5 Tbit/s.

But Barefoot's technology is also very relevant to next-gen telecom networks: AT&T, for example, has deployed Tofino-based systems to boost performance and efficiency on its data transport network.

Barefoot was launched in 2013 by Nick McKeown, Martin Izzard and Pat Bosshart, and it has raised more than $155 million in six rounds (according to Crunchbase) from the likes of Andreessen Horowitz, Lightspeed Venture Partners, Sequoia Capital, Goldman Sachs, AT&T, Dell, Google, the Alibaba Group and Tencent.

That's quite the lineup. But that's the kind of backing that a name like McKeown, who was inducted into the Light Reading Hall of Fame in 2017, can attract. He is well known in the networking industry, not least for founding SDN startup Nicira Networks with Martin Casado and Scott Shenker in 2007 and selling it for more than $1 billion before it was even a year old. (Note that Shenker is now back in the news with his "Lean NFV" startup Nefeli.) 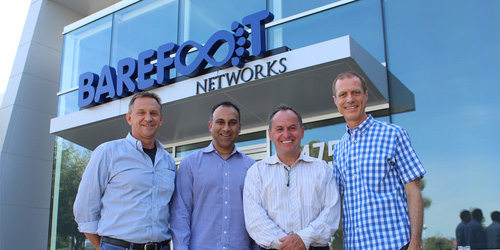 Now Intel is going to benefit from Barefoot's work and have a stronger play for next-gen data center and wide area data networks, with the relevance of the Barefoot acquisition to the telecom market likely to grow in time as distributed cloud/edge computing resources become important to telco 5G strategies.

It's worth noting, too, that Intel was recently linked to the potential acquisition of switching components vendor Mellanox but lost out to Nvidia.