Roku is again at the center of a high-profile streaming battle.

Roku has blocked access to Charter Communications' Spectrum TV app after the two sides were unable to strike a new agreement, Charter explained in this blog post. 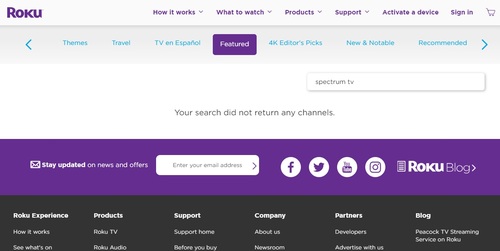 A search for 'Spectrum TV' currently comes up empty on Roku's web-based Channel Store. It's the same story when one tries to search for Charter's pay-TV app directly on a Roku device.

"Despite our best efforts to reach an agreement, Roku has not accepted Spectrum's offer to continue our contract, which allowed customers to access the Spectrum TV app from Roku devices," Charter said.

Charter said it is still trying to work out a new deal.

"Roku is an important partner and we are hopeful we will reach an agreement soon," a Charter official told The TV Answerman website, which noted that Roku first added Charter's app in 2015.

Charter, Roku bickering at the FCC

Charter did not elaborate on why Roku has declined the cable operator's latest offer.

However, the two have been squabbling at the FCC over Charter's request to sunset the Commission's ban on Charter's use of data caps and usage-based broadband data policies on May 18, 2021. In comments filed in August, Roku refuted Charter's contention that the data cap and paid peering conditions imposed through Charter's merger with Time Warner Cable and Bright House Networks are no longer necessary. Charter, which promotes the Apple TV 4K as a set-top box alternative, has argued that the flourishing OTT video market presents "compelling evidence" that the conditions attached to the 2016 merger are no longer in the public interest.

Charter and Roku have been asked for further comment.

Update: Roku, which removed the Spectrum TV app from its channel store until a new deal is reached, confirmed that it is working with Charter on a renewal and that current Spectrum TV users still have access to the app on Roku devices.

"As America's #1 streaming platform we are committed to providing access to amazing streaming content at an exceptional value for our users," a Roku spokesperson said in a statement. "Our contract with Charter for the distribution of the SpectrumTV (v)MVPD channel on the Roku platform expired and we are working together to reach a positive and mutually beneficial distribution agreement. All existing customers can continue to use the Charter app while we work together on a renewal."

One of several skirmishes involving Roku

The Charter-Roku row is the latest in a recent string of impasses involving Roku and a major programmer or pay-TV service provider.

Roku, which ended Q3 2020 with 46 million active accounts, and WarnerMedia have so far been unable to come to an agreement for HBO Max reportedly due to WarnerMedia's reluctance to sell HBO Max through The Roku Channel, Roku's aggregation service for both free, ad-supported and subscription-based streaming services. However, Roku and WarnerMedia are in discussions as Warner Bros prepares to release Wonder Woman 1984 simultaneously on HBO Max and in theaters on Christmas Day, and do the same for Warner Bros' full 2021 movie slate.

Prior to this impasse, another scuffle between AT&T and Roku prevented the new AT&T TV streaming service from being available via Roku for a period. Access to the AT&T TV app via Roku was restored in May.

In February, Roku also had a temporary run-in with Fox that threatened access to Fox's free, live streaming feeds of Super Bowl LIV. More recently, Roku and NBCUniversal clashed over terms for Peacock, NBCU's new streaming service, but eventually got it ironed out, more than two months after Peacock's national launch on July 15.