Charter soft-launched Spectrum Mobile in the summer of 2018 and went full-market in that fall. Spectrum Mobile's 2.06 million mobile lines in service puts it within shouting distance of Comcast's Xfinity Mobile service, which was introduced in April 2017 and ended Q3 2020 with 2.58 million total mobile lines. 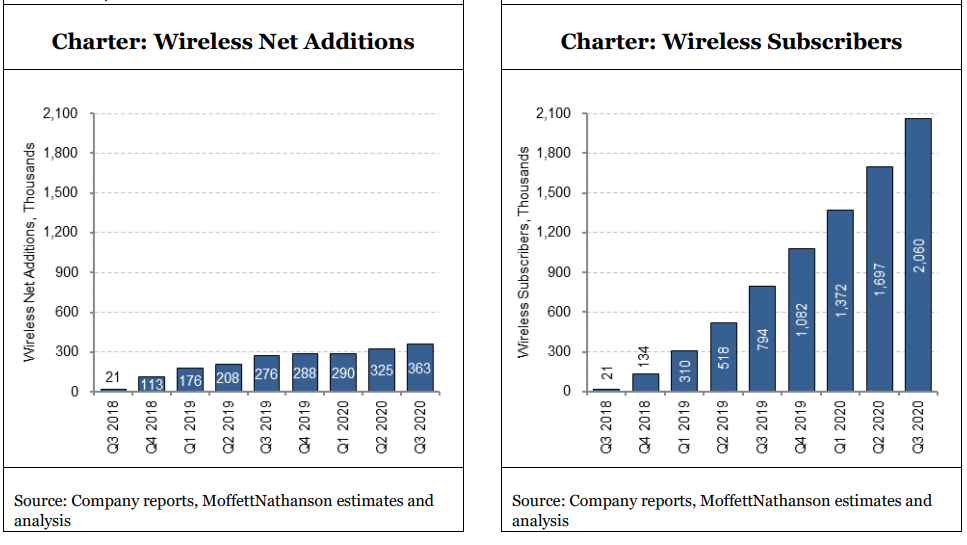 By passing 2 million total mobile lines, Charter crosses a threshold that, as the operator has previously stressed, puts the service into EBIDTA-positive territory – save for those pesky acquisition costs. But Charter's not about to stop acquiring mobile lines. In fact, it wants to step up that activity.

Spectrum Mobile "is already EBIDTA-positive, if we decided to stop growing, which, of course, we won't do," Charter CFO Chris Winfrey said on Friday's earnings call. "We're going to try to grow [mobile] as fast as we can." He added that Charter's mobile EBIDTA performance hinges on the overall rate of growth and the subscriber acquisition costs attached to it.

Charter will deploy CBRS spectrum on small cells to help complement wireless and mobile coverage it's getting from its Verizon MVNO agreement as well as Charter's own Wi-Fi networks. Charter often refers to this as an "inside-out" strategy whereby it will use its own wireless networks in dense and highly trafficked areas to help offload traffic and offset some of the costs incurred by traffic flowing over the Verizon mobile network.

"Over a multi-year period, we'll execute on our inside-out strategy with small cells attached to our existing network using unlicensed and  now licensed spectrum  based on a disciplined return-on- investment approach consistent with our goal of reducing mobile operating costs," Rutledge said.

Charter views spectrum as a tool to extend connectivity and use it to reduce its cost structure, Winfrey added.

"I don't think it will be material in the short term," Winfrey said of the potential savings Charter hopes to reap with its spectrum. "I think it will occur over a  multi-year period."

Charter has also registered to bid in the federal government's upcoming C-band auction.

Reflecting Q3 results at other major US ISPs, Charter's broadband subscriber growth was strong in Q3 2020. But Charter continued to surprise the market  and buck the trend  as it put forth a second consecutive quarter with video subscriber additions.

"Charter once again hit the ball out of the park, joining Comcast and Altice in delivering big beats on what is, to many, the most important metric in any cable operator's quarterly report," Craig Moffett, analyst with MoffettNathanson, said in a research note about Charter's Q3 results. Although Charter's 8.8% annual broadband sub growth is sizable, Moffett views margin expansion as more important to the cause. He notes that Charter's margins (without wireless) have soared by nearly five percentage points, to 40.5%.

Rutledge attributed the pay-TV growth to video connects that happened to be pulled through alongside Charter's massive broadband haul, rather than any special video offers that consumers are responding to.

"We don't think that the overall video marketplace has changed," Rutledge said. "We still think that fat bundles of video are under pressure and will continue to be. We are just growing faster than that [pay-TV] erosion."

Business services were essentially flat at $1.6 billion, with $988 million generated from small and midsized business and $617 million from enterprise customers.

Mobile revenues reached $368 million (versus $192 million in the year-ago period), with $172 million attributed to device revenue.

Rutledge's contract with Charter has been extended through 2024, with his base salary rising roughly 25%, to $2.5 million, along with a target annual cash bonus opportunity of 300% of his annual base salary. On November 3, he will also be granted an award of stock options with a grant date fair value of $30 million.

"Yes, more time in the salt mine," he joked on today's call. [Ed. note: Rutledge's new contract puts him in position to buy a lotta salt  and pepper, and paprika and pretty much anything else he wants to place on the spice rack.]