Charter could target its 'Worldbox' to broadband-only subs

Charter Communications Chairman and CEO Tom Rutledge opened up the possibility that the cable operator's IP-capable "Worldbox" set-top could be used as a video streaming device targeted to the operator's broadband-only customers.

Charter has deployed at least 2 million Worldbox units. In addition to supporting Charter's pay-TV service and a cloud-based Spectrum Guide, the hybrid QAM/IP Worldbox is also being used to integrate Netflix and other third-party streaming applications. 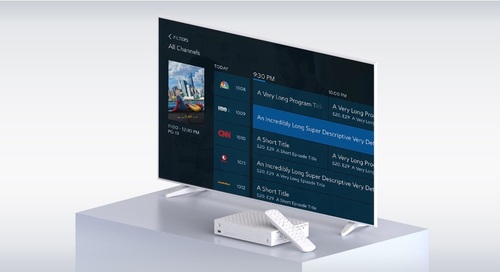 Charter is inching toward a plan to offer its Worldbox – an IP-capable device that is integrating a greater number of third-party, direct-to-consumer streaming apps – to its broadband-only customers.
(Image source: Charter)

"We want to have a transactional marketplace on a consumer-friendly interface so that a customer of ours has access to all of the products they may want to buy that are direct-to- consumer," Rutledge said Friday on Charter's fourth quarter 2020 earnings call. "There's an opportunity for us  to be sellers of that and to operate a store  a consignment store  and to create value for us and for customers through that mechanism."

Charter, he added, has "an opportunity to offer an app-based platform to our data-only customers  Ultimately, I expect that all of our customers will have opportunities to transact with us in a video marketplace."

Rutledge said Charter has plans to add multiple streaming video apps to its base of Worldbox units in the coming months.

Charter isn't yet saying when or if it might pull the trigger on such a strategy. However, the mere possibility it might seemingly pours more cold water on the notion that Charter could strike a deal with Comcast to license technology underpinning Xfinity Flex, a streaming/smart home product that Comcast is offering for free to broadband-only customers. Comcast has already integrated many of the most popular streaming apps onto X1 and Flex, including Netflix, Amazon Prime Video, Hulu (SVoD only), HBO Max, CBS All Access (soon to become Paramount+) and NBCU's Peacock, with plans to add Disney+ and ESPN+ to the mix in Q1 2021.

Rutledge acknowledged in 2019 that Charter has held talks about licensing or syndicating Comcast's technology for X1 and Flex, but it appears that Charter has become increasingly confident that it can develop such a product using its own platform. Or maybe this is just a shrewd negotiation tactic on Rutledge's part.

Still, today's comments are another recent indication that Charter's interest in licensing Comcast technology has waned. Speaking last fall at a Goldman Sachs event, Rutledge touted Charter's ongoing plan to integrate third-party streaming services onto its own boxes and its continued work porting its own pay-TV app to multiple TV-connected streaming platforms, including Apple TV and Xbox gaming consoles. Charter has also developed a Spectrum TV app for Roku players and Roku TVs, but Roku is currently blocking access to new downloads of Charter's app after the two sides failed to forge a new agreement before the prior one lapsed.

"We have an integrated strategy and app-based strategy. We don't feel like we need to have an equipment strategy necessarily," Rutledge said at the time.

But rolled up, 2020 was a banner year for broadband, as Charter added 2.11 million residential high-speed Internet subs for the full year, handily beating the 1.3 million it added in all of 2019. Despite the loss in Q4, Charter also managed to add 19,000 residential pay-TV subs for full 2020.

With most of the "outsized" subscriber growth seen in 2020 now in the rear-view mirror, Rutledge said Charter expects subscriber adds and churn to return to more normalized levels consistent with the metrics it saw in 2019. Boiled down, Charter's broadband base will continue to grow, albeit at a slow pace, and the pay-TV base will likely continue to decline.

Rutledge said Charter will try to stem video sub losses with smaller streaming packages, but doesn't expect growth in that sub-segment to completely offset all of the anticipated losses.

Among other broadband-related tidbits from the quarter, Charter noted that 85% of its residential Internet customers are on tiers delivering 100 Mbit/s (downstream) or more, and that more than 50% are on tiers delivering 200 Mbit/s or more. Charter's minimum downstream speed is now 200 Mbit/s in 75% of its footprint. Charter has also launched its new managed Wi-Fi service to 65% of its footprint for new Internet connects.