US broadband growth continued to surge through the third quarter of 2020, but "pull-forward" growth driven by the ongoing pandemic will likely lead to a slowdown in 2021, MoffettNathanson analyst Craig Moffett predicted in a new report on the domestic broadband sector.

Led by gains of 1.38 million subs by cable operators, US broadband service providers combined to add 1.32 million subscribers in Q3 2020, up from net adds of 947,000 a year ago. They also turned in astonishing year-over-year growth of 4.7%, according to Moffett's estimates.

US telcos combined to lose 65,000 subs in Q3, improving on a year-ago loss of 234,000, thanks in part to a rapidly eroding DSL base and pickup of broadband subs on fiber-to-the-premises networks.

Sub growth for satellite broadband, which accounts for just 1.8 million subs (or less than 2% of the market) and are often the best option in the markets they target, was relatively flat. Moffett notes that data on fixed wireless ISPs is not readily available as most don't report sub numbers publicly and tend to compete in rural areas.

According to the report, the US broadband market finished Q3 2020 with a penetration rate of 84%. Thanks to US cable's continued strong showing, the 4.7% growth rate for the entire domestic broadband industry in Q3 2020 was the fastest in about a decade, Moffett noted.

But where all of those subscribers are coming from (wireless-only households, satellite broadband or new household formation) during this crazy period is not crystal clear. Several operators, including Atlantic Broadband and Cable One, have been offering temporary low-cost broadband options during the pandemic, but that's likely still not the main driver. Moffett believes the rise in fixed broadband penetration probably came through a combination of all these doors to various degrees.

"The pandemic hasn't meaningfully increased the availability of broadband, but for some, it likely has made it more affordable or more relevant," Moffett explained. "It is not unreasonable to argue that, in a market where penetration stands at 84%, any acceleration in achieving incremental penetration of what's left can be thought of as a pull-forward."

But that full scenario  including the pull-forward growth in 2020  has caused the analyst to revise his broadband subscriber forecast for 2021. At the same time, with so many questions and so much uncertainty still swirling around the market, Moffett admits that "our estimates for 2021 feel less certain than normal."

Still, it's all likely to mean slower broadband sub growth for cable operators in the year to come, though broadband margins should continue to rise.

Moffett now expects Comcast to add 1.17 million broadband subs in 2021, down from a prior estimate of 1.37 million.

Charter Communications is anticipated to add 1.1 million subs in 2021, versus a prior expectation of 1.27 million. Charter's 2021 forecast includes the operator's expansion that will come way of the phase I results of the Rural Digital Opportunity Fund (RDOF) auction. Moffett expects Charter to build ahead of the required RDOF milestones set by the FCC and see penetration of deployed locations rise to 75% over five years. 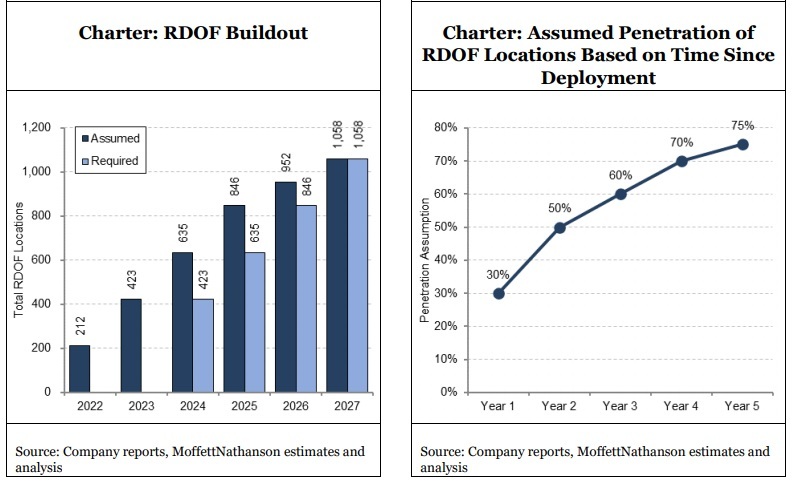 The potential silver lining for cable here is that broadband growth is likely to be baked into analyst expectations and that it's possible that accelerating broadband margins will continue to beat expectations. Moffett points out that Cable One broke the 50% margin threshold in Q3 2020 (51.4% to be exact) and all other US operators in his coverage posted record highs in the category.

"The march of higher margins has been largely uninterrupted for five years now, making it all the more remarkable that estimates continue to come in too low," he said.

Meanwhile, the regulatory environment for US broadband is also somewhat cloudy heading into next year. Moffett's 2021 forecasts don't account for any additional broadband stimulus, though he points out that Democrats have called for earmarking as much as $80 billion for broadband expansion.

Moffett is also unsure if there will be a Democratic-run FCC because of the possibility that the departure of current Chairman Ajit Pai will leave the Commission at a 2-2 split and keep it that way if a Republican-controlled Senate stonewalls new Democratic FCC nominees.