New Orleans -- SCTE/ISBE Cable-Tec Expo -- DOCSIS 4.0 will give cable operators the tools to expand their bandwidth ceiling to 1.8GHz, and allow them to start casting their eyes toward 3GHz. Those two steps might very well represent temporary weigh stations for the journey ahead for the industry's widely deployed hybrid fiber/coax (HFC) networks.

The cable industry, in partnership with CableLabs, is already exploring how to bump the bandwidth ceiling to 6GHz, a move that would greatly extend the life of HFC, Jeff Finkelstein, executive director of advanced technology at Cox Communications, said here Tuesday during a keynote held in conjunction with a Light Reading-hosted event focused on network virtualization.

In addition to staving off the need to execute an expensive fiber-to-the-premises (FTTP) upgrade, mining more data out of the HFC network could also enable MSOs to deliver symmetrical speeds well in excess of the 10 Gbit/s targeted by "10G," a cable industry initiative that's the centerpiece of this week's Cable-Tec Expo in The Big Easy. 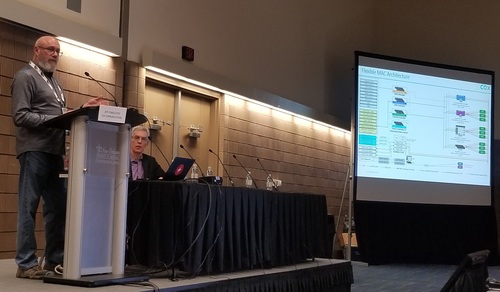 "Stories of DOCSIS's demise has been reported for 20 years," Finkelstein said. He said 825-class cables have the potential to support services in the region of 10GHz, while 500-class cables could probably handle 6GHz or 7GHz. To put that potential into perspective, the current DOCSIS 3.1 specs erect a bandwidth ceiling of 1.2GHz.

DOCSIS 4.0 targets spectrum up to 1.8GHz, but operators, Finkelstein said, are already looking into 3GHz passive devices that could help to future-proof HFC for that possible future step. It's likewise possible that CableLabs could later develop a new spec, perhaps something along the lines of a DOCSIS 4.1, that envisions a 3GHz network and sets the stage for what might come after that.

"We have a long way to go," Finkelstein said of HFC's anticipated lifespan.

Finkelstein also used his talk here to discuss why the cable industry is eager to virtualize the access network so it can rapidly enhance and add services as customer behaviors change in a way that requires more capacity, lower latencies and a higher degree of reliability.

Some of that work is already underway. New flexible MAC architectures, remote PHY and remote MACPHY products and remote core technologies represent "building blocks of virtualization" for the cable industry, Finkelstein said. Those are all "individual stepping stonesyou're not trying to jump to the end," he added.

While those individual components are important, he said it's also critical for operators and their vendors to work together on building a full ecosystem for virtualization and to avoid getting too bogged down with fixating on individual elements and products such as Kubernetes.

"We can't do it [virtualization] everywhere, but we can be selective and opportunistic in the way we expand the ecosystem," he said. "The ecosystem -- from the telemetry to monitoring -- has to fit into how we do business."