Disney's core businesses, including its theme parks, movie studio and traditional TV channels, are being hit hard by the COVID-19 pandemic. Though some of the financial impact will be relatively short-term as pieces of Disney's business are expected to rebound eventually, the crisis has shined the light on the escalating importance of the company's streaming strategy with services such as Hulu and Disney+.

"To their credit, although probably never foreseeing a global pandemic, Disney has been very forward thinking about building out a unique set of Direct-To-Consumer assets to secure their future," Michael Nathanson, analyst with MoffettNathanson, noted in a research report issued Monday.

The good news for Disney is that growth of its direct-to-consumer streaming business should continue during this period. Still, the growth won't be nearly enough to overcome the damage being done to the other areas of its business.

Hulu and Disney+ "should be gaining strength from this crisis, but do not contribute free cash flow to offset the erosion elsewhere," wrote Nathanson, who has downgraded Disney shares from "buy" to "neutral," and reduced his price target by $8, to $112.

"The core issue for Disney is not that their future isn't well protected, it is that the fallout from the COVID-19 pandemic is incredibly harmful to their near and mid-term financials," he added. "While Disney has the advantaged assets to win in this new world, we fear that the uncertainty of the present situation creates significant and unrivaled earnings risk for the foreseeable future."

Against this backdrop, Disney+'s strong start following its initial debut last November has continued thus far into 2020 as millions of consumers around the world sheltered at home.

Disney announced last month that its new SVoD service had eclipsed 50 million subscribers. Nathanson expects Disney+ to push that to 55 million by the end of Disney's fiscal 2020. Given Disney+'s early momentum in the US and its hot start in some international markets, the analyst also raised his fiscal year 2021 forecast for Disney+ to 76 million, up from a previous expectation of 62 million. 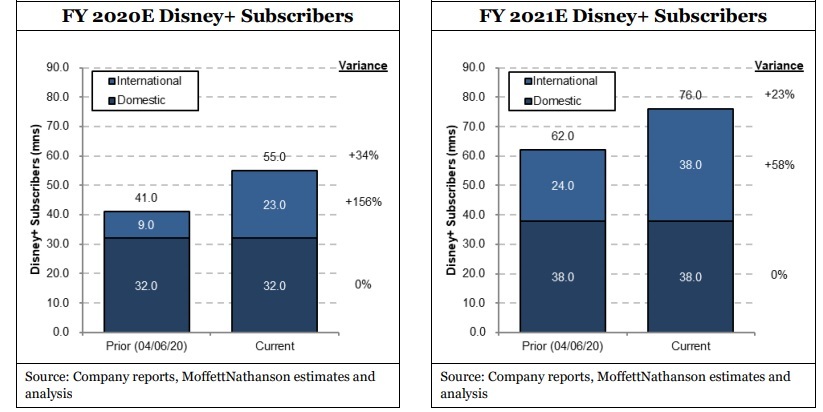 However, Nathanson warns that a big unknown ahead is Disney+'s exposure to elevated levels of churn as early US promotions (such as the free year of Disney+ for millions of Verizon customers on unlimited mobile plans) roll off later in the year. Another point of pressure is a Hollywood shutdown during the outbreak that will stem the flow of new, original content for Disney+.

Disney+ could profit from new PVoD push
But Disney+'s content game could get a lift from the temporary shutdown of movie houses.

Following NBCU's recent move to release Troll World Tour in homes via a new "premium" video-on-demand (PVoD) window, and WarnerMedia's upcoming similar move with Scoob!, Nathanson notes that Disney intends to "experiment with its own exclusive-to-SVoD release" as Artemis Foul goes straight to Disney+ next month.

Moving forward, he also expects Disney to be aggressive with post-theatrical windowing strategies, especially if some of its top theatrical titles, including Mulan, underperform when theaters begin to open up.

"This could mean further experimenting with PVoD as well as bringing the movie to Disney+ a lot sooner than it would under more normal circumstances," Nathanson wrote, citing examples such as Pixar's Onward and, more recently, Disney's Star Wars: The Rise of Skywalker. "Given the limited amount of new content on Disney+, it would appear that Disney has all the incentive to push Mulan sooner, not later, on Disney+."

While an acceleration of home streaming releases will impact Disney's traditional box office revenue, it could likewise enable Disney+ to shore up its defense against other major, general entertainment streaming services such as Netflix and Amazon Prime Video as well as newcomers such as HBO Max, set to launch on May 27, and NBCU's Peacock, which will launch nationally on July 15 following an early release on Comcast's X1 and Peacock platforms.

Meanwhile, the analyst also expects Hulu's live TV service, along with Google's YouTube TV, to continue picking up incremental subscribers after Sony's PlayStation Vue shut down earlier this year. But Hulu's ability to accelerate those subscriber adds will be curbed by the current lack of live televised sports and general pandemic-induced belt-tightening that is wreaking havoc across the full pay-TV sector.

The current lack of live sports are accelerating pay-TV cord-cutting to the detriment of Disney-owned ABC and ESPN. Comcast, AT&T, Verizon and Charter Communications lost a combined 1.6 million video subs in the first quarter, about 270,000 worse than MoffettNathanson has expected, and about 640,000 worse than Q1 2019 totals from that grouping.

In the wake of those recent results, MoffettNathanson estimates that total US pay-TV subs will be down 7.5% among "traditional" service providers.