Focusing on a distilled mix of news, entertainment and educational content, Amazon has teamed with more than 100 content partners on a new curation initiative that highlights a select group of free and subscription-based apps on Amazon Fire TV players and Fire tablets.

That new experience, billed by Amazon as "#AtHome," was assembled in part to help users navigate and discover streaming apps from a focused array of content and content categories as millions of consumers stay at home and binge on streaming services.

"The entertainment industry is shifting the way they think about bringing content to you during this time, and #AtHome from Amazon will be the way to discover all of it," Sandeep Gupta, vice president of Fire TV, explained in this blog post about the initiative. 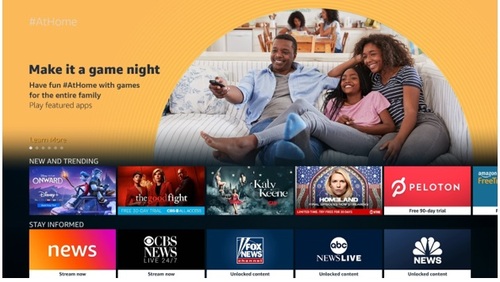 Amazon said more than 100 content partners are involved with the US debut of its curated #AtHome offering.

In the entertainment category, #AtHome is highlighting several premium services such as Showtime, HBO, CBS All Access and Sling TV, along with a news-focused slate featuring CBS News, Fox News, ABC News and NBC News. The Kids & Family and Education for Kids buckets feature services such as Boomerang, Amazon's own IMDb TV offering, and Tubi, as well as ABCmouse, Kidoodle TV and PBS Kids. The Health & Wellness category, meanwhile, highlights offerings from Peloton, Beachbody, Gaia, Yoga International and Joyn.

Apps for #AtHome are selected by Amazon's own team of curators and content partners are not paying for placement there, an Amazon official said. However, placement on #AtHome does require approval from those content partners.

While #AtHome has initially been introduced in the US, Amazon is working to launch it in the UK, Germany, France, Italy, Spain, Japan, Canada and India. Amazon, which is also donating $5 million of Amazon devices to hospitals, schools and community organizations during the pandemic, said it also plans, in the coming weeks, to source new content not currently available on its devices.

Amazon, which is battling with Roku, Google (Android TV) and Apple TV for streaming platform dominance, is debuting #AtHome as the use of SVoD services – and video streaming in general – skyrocket.

Comcast, for example, reported this week that streaming and web video consumption on its network has jumped 37% since March 1. Meanwhile, Nielsen said it is seeing a big surge in SVoD viewing during the pandemic, including a near doubling of SVoD usage among consumers who identify as heavy sports viewers. Those sports-oriented viewers spent about 9% of their time watching SVoD fare from March 7-28, Nielsen said. Total streaming minutes per week in the US, meanwhile, jumped 131%, to 161.4, for the week of March 30 versus year-ago totals, according to a combined analysis of Nielsen and MoffettNathanson data.

In the world of smart TVs, Vizio and its Inscape unit said usage of all TV apps on Vizio's SmartCast platform rose 20% the week of April 6 compared to March 9. Additionally, usage of the platform's native apps has surged 62%, and overall OTT minutes per user on that platform have jumped 53% during that same time frame.