With the cable industry more than a year into the COVID-19 pandemic, it's not exactly news anymore to say that the increased use of video conferencing and other apps taxed the upstream capacity of hybrid fiber/coax (HFC) networks.

That situation caused cable operators to add capacity to their HFC networks, push ahead with node splits and accelerate the use of AI-assisted technologies that enable networks to use the existing spectrum more efficiently. It also caused some projects, including plans centered on a distributed access architecture (DAA) and network virtualization, to be temporarily pushed out. And, thanks to a significant usage increase in historically thin upstream, there's now momentum building for "mid-split" and "high-split" upgrades that expand the amount of spectrum dedicated to the upstream.

CommScope has put out its latest annual study, based on bandwidth consumption from tens of millions of broadband subscribers of a cross-section of Tier 1 and Tier 2 operators, that provides another deep look at how the pandemic impacted traffic levels.

The general finding is that demand for upstream capacity far outran the increases witnessed in the downstream. Prior to the pandemic, the average yearly growth in the upstream bandwidth was typically 20%, but surged some 57% over the past year, CommScope found. The study also found that there was a 10% to 15% boost in the subscriber downstream average bandwidth compared to a step up of 25%-35% in the upstream direction. 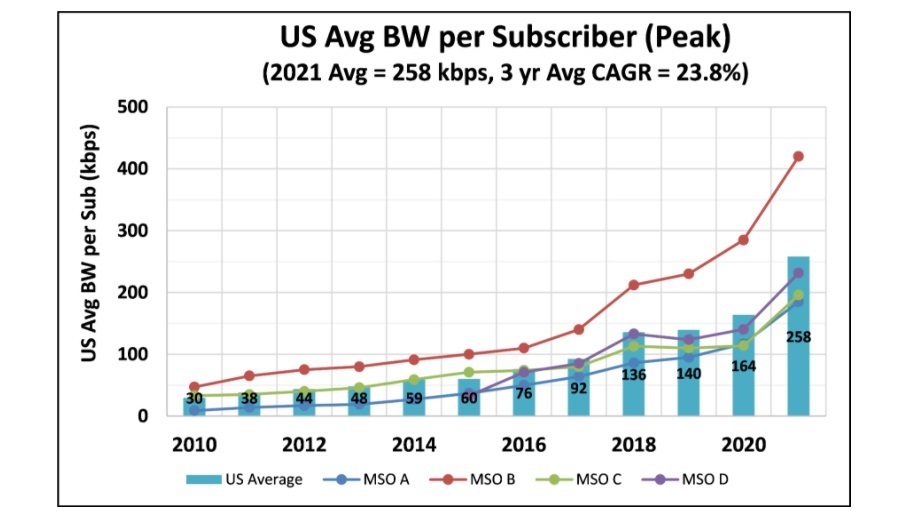 Cable networks largely survived the initial traffic spikes of the pandemic along with other surges that cropped up later in 2020 with traditional blocking and tackling – capacity enhancements to existing cable modem termination systems along with node splits.

But the pandemic also stretched out the day's busy usage periods as people worked and schooled from home. Those peak usage periods "grew from four hours a day to eighteen, and the average household demand surged, especially in the upstream," CommScope Engineering Fellow John Ulm explained in this blog post. 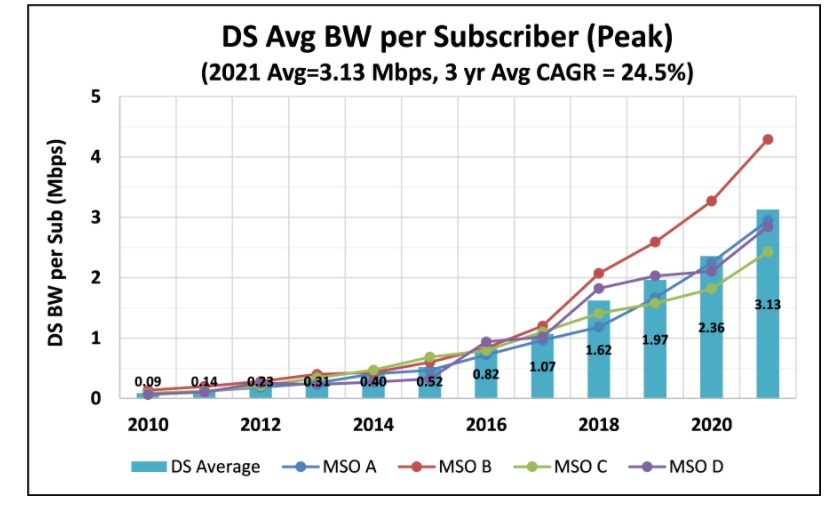 All of these factors will likely cause a shift in how cable operators study and predict future capacity demands.

Pre-pandemic, operators typically relied on a relatively simple equation to figure out future bandwidth needs  determining the average utilization during the peak busy period, which produces a relatively static look at the usage of the number.

In an interview about CommScope's latest findings, Ulm notes that there's a second important component  the quality of experience (QoE) overhead  that that now deserves more attention than ever before. That component, he explains, determines how much overhead needs to go into the system to ensure that customers are getting the burst speeds supported by their particular broadband tier.

If there's a sudden change in the system that causes that static utilization to leap 50%, such as what happened upstream during the pandemic, the operator has much less overhead available to absorb the impact.

Thanks to a big capacity advantage, the HFC downstream, which delivers bursts of 1 Gbit/s to certain high-end customers these days, usually has much more wriggle room than an upstream that might support maximum bursts of just 20 Mbit/s. That left the capacity limitations of the HFC upstream more exposed during the pandemic.

CommScope's data shows that the Throughout Average (Tavg) for upstream consumption was at about 160 kbit/s around January 2020  meaning an operator would need about 32 Mbit/s of upstream capacity for the static usage, and perhaps another 40 Mbit/s of QoE overhead to get a grip on burst speeds. That picture changed significantly when the Tavg jumped to almost 250 kbit/s during the pandemic  it left a lot less headroom for burst-level speeds.

It's that combination  the Tavg and the max service tier  that are the "most important metrics for capacity planning" and "define what operators must engineer their networks to handle," Ulm wrote.

And monitoring and studying that mixture of data will remain critically important as demand continues to climb on HFC networks that, until spectrum upgrades are put into play, possess much less upstream capacity to spread around than they do on the downstream side.

"The upstream is just smaller total capacity, so there's less margin to absorb these changes and the upstream had the larger percentage changes," Ulm said. "That's why a year ago everybody was really feeling the pinch in the upstream."

Ulm says node splits, which can require operators to push fiber deeper into the network and add nodes, will only get cable operators so far due to their diminishing returns. Rather than splitting nodes every two to three years, he says a "mid-split" that pushes the upstream from 42MHz today to 85MHz delivers much more bandwidth for the buck while also obviating the need to do frequent node splits. Also on the table these days are 204MHz "high-split" upgrades.

"If you look at long-term economics, the 85MHz [mid-split] starts looking much better than just business-as-usual, splitting nodes every couple of years," Ulm says.

But not all operators are in a position to do that. Some still have DOCSIS 3.0 modems on the plant or use older set-tops utilizing out-of-band frequencies that can't be moved above 85MHz, Ulm explained.

However, they'll have to get moving as it becomes increasingly unlikely they'll be able to milk a 42MHz upstream for a lot longer.

"The ratio between downstream capacity and upstream capacity has gotten really out of whack," Ulm said. "We've neglected the upstream for the last decade  We've had the tools available and people are finally waking up and using them."

HFC asymmetry will live on, despite growing upstream demands

Based on the latest data from the NCTA's COVID-19 Dashboard, there are signs that the growth and peak usage of the network might be tailing off. But there's still no telling when demand might start shooting up again. 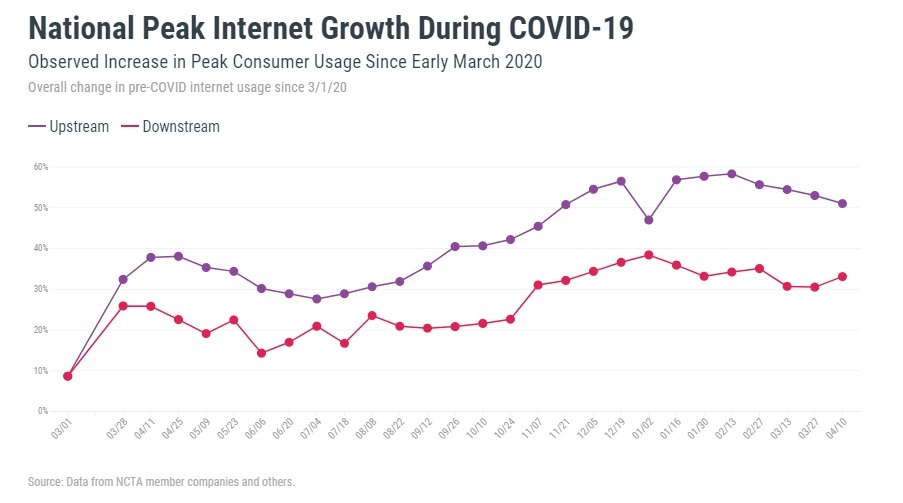 Source: NCTA COVID-19 Dashboard
Click here for a larger version of this image.

CommScope expects to see a "new normal" post-pandemic that will be marked by ongoing increases in usage that aren't nearly as chaotic or severe as what was seen starting in March 2020.

On the downstream side, the company expects to see a CAGR of 20%-25% for the foreseeable future, with a similar 20%-25% CAGR for the upstream. That, the study concluded, should pave the way for the downstream/upstream ratio to hover in the range of 10:1 to 15:1.