The multi-gigabit era is in full swing at Comcast.

The nation's largest operator announced Thursday that it will begin to introduce symmetrical multi-gigabit speeds in 2023. That will represent a step in a bigger plan to deliver symmetrical multi-gig capabilities to more than 50 million homes and businesses before the end of 2025.

Ahead of that move, the operator said it is immediately rolling out download speeds of up to 2 Gbit/s, along with 5x to 10x faster upload speeds, to 34 cities and towns before the end of 2022. For those upstream enhancements, Comcast is likely using "mid-split" or "high-split" upgrades that expand the amount of spectrum dedicated to the upstream. 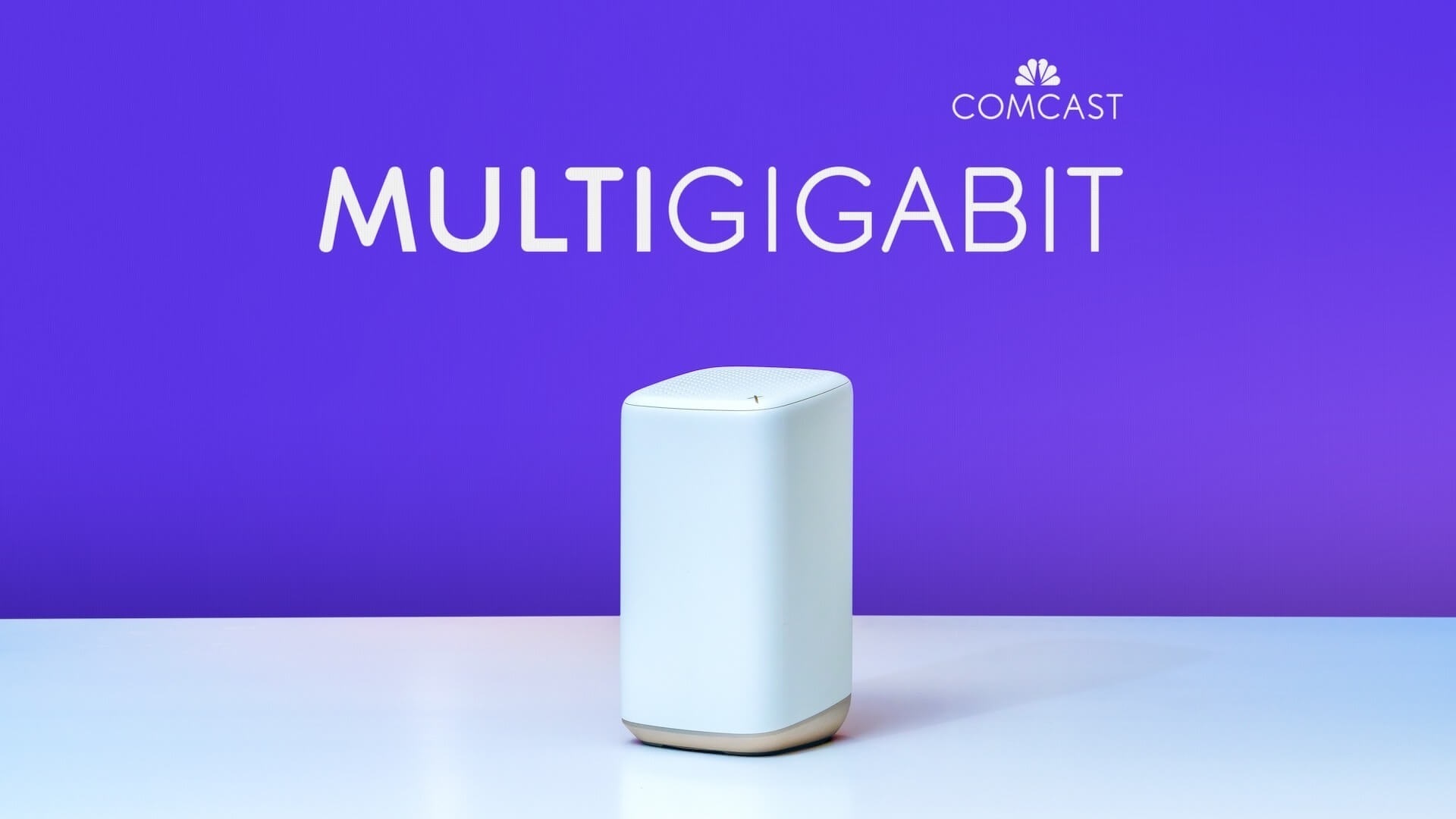 With an in-home assist from a new multi-gig-capable Wi-Fi 6E gateway, Comcast expects to offer symmetrical multi-gig capabilities to more than 50 million homes and businesses before the end of 2025.
(Source: Comcast)

The operator said it will support multi-gig speeds in the home with a Wi-Fi 6E gateway and the use of its xFi Pod Wi-Fi extenders. Introduced in January, that gateway tacks on support for the 6GHz band alongside traditional support for the 2.4GHz and 5GHz bands.

Comcast's leap into the multi-gigabit era arrives as it and other cable operators come under pressure from AT&T, Frontier Communications, Ziply Fiber and other fiber-to-the-premises (FTTP) competitors that have launched multi-gig services. Comcast's speed upgrades are also taking shape as the operator starts to see the rate of broadband subscriber growth slow – Comcast's residential and broadband subscriber adds fell flat in Q2 2022.

Comcast has been asked for details on pricing and data usage policies for the new speed. Comcast current data usage policy, supported today in its Central and West divisions, limits usage to 1.2 terabytes per month before charging $10 for each additional bucket of 50 gigabytes. Comcast also sells a standalone unlimited data option that fetches an additional $30 per month.

Update: Pricing tends to vary by market. But, by way of example, the "everyday price" for Comcast's new 2-Gig downstream tier in Colorado Springs is $120 per month, the company tells Light Reading. That price is similar in other 2-Gig markets, but the price does go down when paired with various market-specific promotions and offers, the company added.

According to this Comcast chart for the Colorado Springs speed enhancements, upstream speeds are rising across all tiers  on up to 200 Mbit/s for Comcast's 1.2-Gig and 2-Gig downstream tiers. 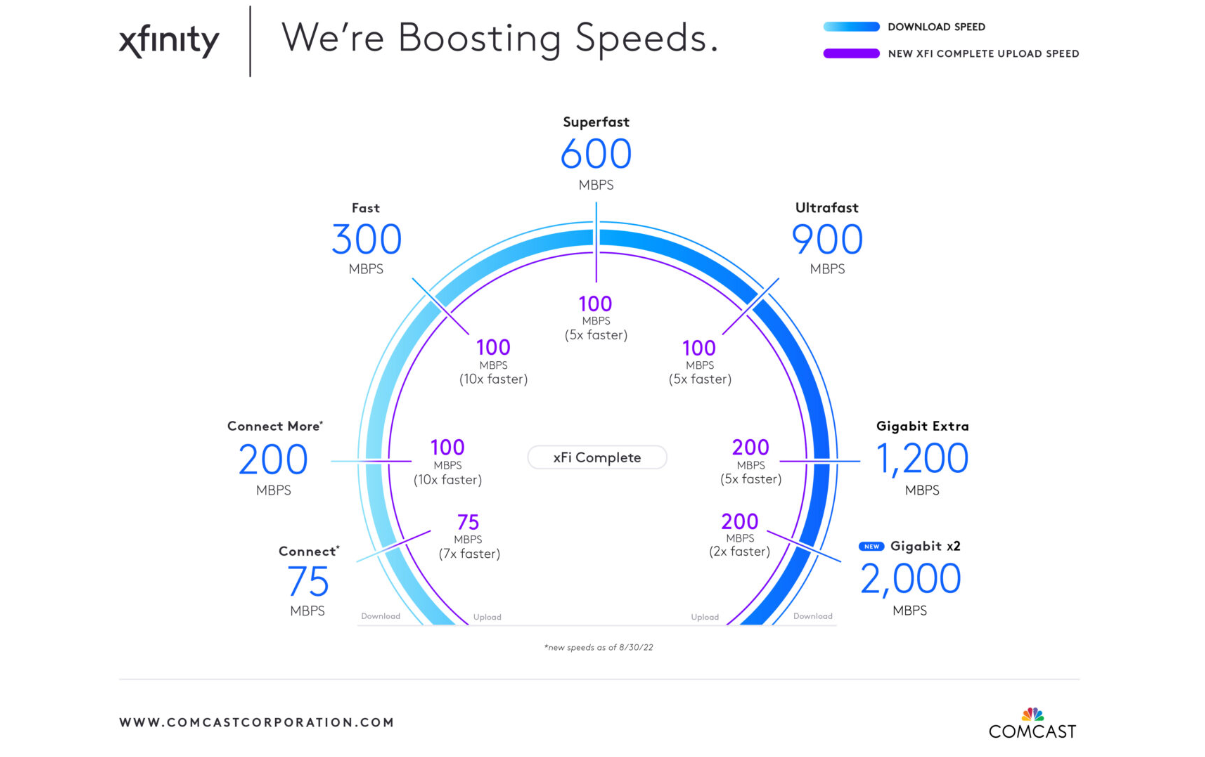 Click here for a larger version of this image.
(Source: Comcast)

Setting the stage for 10G and DOCSIS 4.0

Comcast said the speed upgrades tie into a broader network transformation initiative focused on cloud-based virtualization and other technical updates that pave the way for DOCSIS 4.0 and "10G." The network virtualization effort also ties into a plan at Comcast to become carbon neutral by 2035, the company said.

DOCSIS 4.0 is a new set of CableLabs specs for hybrid fiber/coax (HFC) networks poised to support speeds of up to 10 Gbit/s downstream and 6 Gbit/s upstream along with enhanced security and low-latency capabilities.

Comcast's DOCSIS 4.0 deployment will focus on Full Duplex DOCSIS (FDX), a flavor of the spec that envisions the HFC network to build out to 1.2GHz and equipped with an FDX band that allows upstream and downstream traffic to occupy the same block of spectrum. Several other operators pursuing D4.0 are looking at Extended Spectrum DOCSIS (ESD), an option that envisions a spectrum upgrade to 1.8GHz while keeping downstream and upstream traffic split off and operating in dedicated spectrum.

"10G will deliver so much more than just speed," Elad Nafshi, EVP and chief network officer at Comcast Cable, said in a statement. "The digitization and virtualization work we are doing today is already enhancing our customers' connected experiences and delivering better performance."