After taking an initial, relatively cautious view of US cable's move into wireless, a top industry analyst's outlook has shifted to sheer optimism due to a blend of improving economics and accelerating subscriber growth anticipated to take hold in the years to come.

"Cable wireless is now ready for its star turn," Craig Moffett, analyst with MoffettNathanson, proclaimed in a new report that digs into why he thinks 'it's time to take cable's wireless business seriously."

At a high level, Moffett's shift in attitude toward cable's wireless business is based on a set of relatively recent developments:

Those factors have likewise caused Moffett to raise his revenue and subscriber forecasts for Comcast's and Charter's respective wireless businesses.

He now expects Xfinity Mobile's sub base to surge to 7.89 million lines by 2025, ahead of an original estimate of 7.04 million. 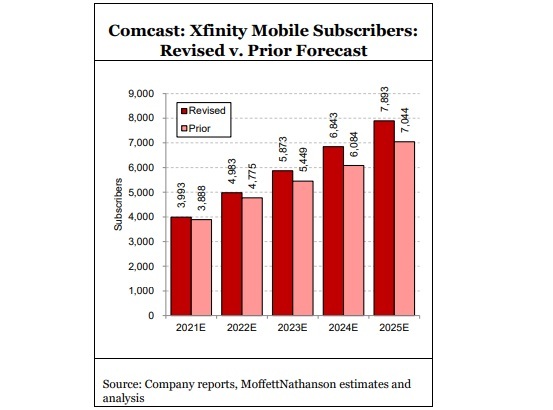 Meanwhile, Spectrum Mobile's base is anticipated to reach 7.24 million subs by 2025, beating an earlier forecast of 6.54 million. 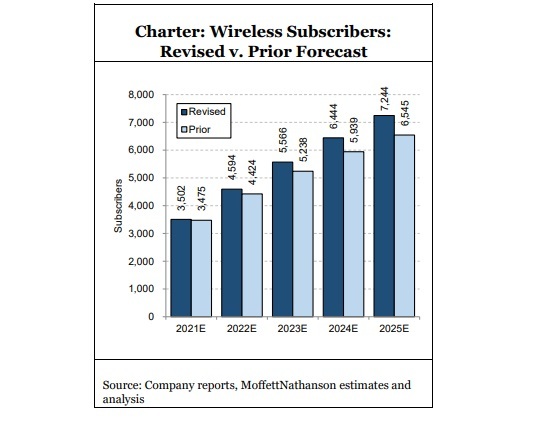 That growth is expected to build on the current scenario, which has seen US cable account for about 30% of wireless industry net additions. US cable, which has accumulated nearly 6 million mobile lines, represents about 2% of the US mobile phone market (prepaid and postpaid), according to Moffett's estimates. And this growth has come without handset promotions that are anywhere near as aggressive as those from incumbents, he points out. 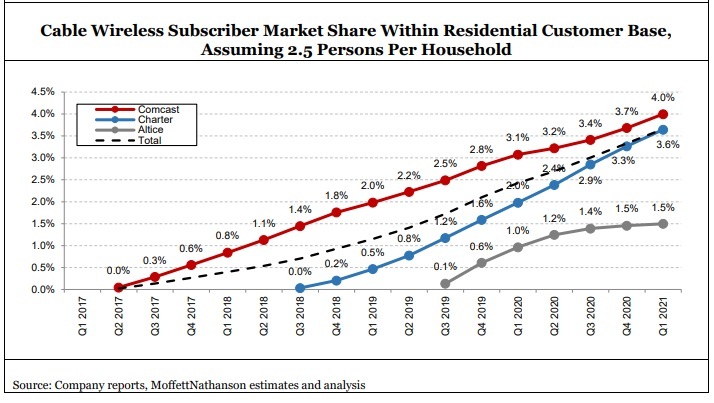 On the financial end, Moffett sees Xfinity Mobile annual revenues reaching $5.12 billion by 2025, accounting for 6.8% of the company's cable segment revenues, up from a prior model of 6.2%. Meanwhile, Charter's Spectrum Mobile unit is expected to pull in annual revenues of $4.23 billion by 2025 and account for 7.25% of total revenues by then, up from an earlier estimate of 6.2%.

The full economic pictures of the Comcast and Charter MVNO deals with Verizon are not known, though Moffett believes the margins on their respective unlimited plans are "razor thin, at best," and somewhat more straightforward for by-the-gig customers. But he expects those economics to improve as both cable operators start deploying strand-mounted CBRS small cells in dense, high-traffic areas.

Moffett estimates costs of about $2,500 per strand-mounted CBRS small cell, versus $25,000 for a more traditional small cell deployment, as cable ops aren't as saddled with costs tied to new zoning and permitting, fiber splicing and separate powering.

But he also acknowledged that cable's offload strategy will require another key piece: eSIMs in customer handsets. Charter and Comcast will need eSIM-equipped devices to prioritize the CBRS network where it's available.

It's early days for the eSIM, with support in the latest iPhones and Samsung smartphones. "Given normal handset replacement cycles, however, by the time Cable has meaningfully executed on their strand-mounted small cell strategy, eSIMs will be in the preponderance of phones," Moffett writes.

Even with all of those pieces in place, it's not yet clear exactly how much mobile traffic cable will be able to offload. Charter chairman and CEO Tom Rutledge reckoned in January that the operator could be in position to offload about one-third of that traffic onto its own network.

Moffett says such estimates are "all over the map," with some as high as 50% (with Wi-Fi offload factored in) or as low as 10%.

"We believe estimates in the range of 10-20% are appropriate," he noted. "Still, the cost savings that would accrue from almost any level of offload would be significant, and could potentially be transformative for Cable's MVNO economics."

Mobile success at Comcast and Charter represents a "mixed blessing" for Verizon in the near-term, as incremental wholesale revenues soften the blow of any lost retail mobile subs, Moffett said. However, Verizon could also be faced with less negotiating leverage as cable accounts for a larger and larger piece of its earnings growth in coming years.

As for other wireless incumbents, with AT&T in particular, "there is no such silver lining" due to potential share loss and ARPU compression, he added.