In a process that's taken more than a year to reach fruition, Astound Broadband has at last taken over as the lead brand of a handful of regional cable and fiber service providers, including RCN, Grande Communications, EnTouch Systems and Digital West. 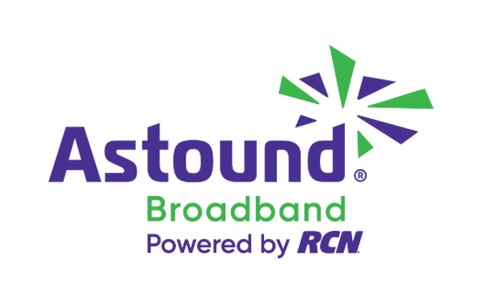 The design work on Astound Broadband's branding was completed about 18 months ago. The company had intended to pull the trigger on the change in 2020, but the pandemic and the need to focus on broadband capacity put the plan on the backburner. The brand change then stayed in a holding pattern as Astound Broadband navigated several recent acquisitions, including a deal for Houston-based EnTouch Systems forged in early 2020.

Amid all that activity, Astound Broadband itself was acquired by Stonepeak Infrastructure Partners for a cool $8.1 billion. By the time the second half of 2021 rolled around, Astound Broadband was hesitant to bring confusion to the marketplace during the company's busiest time of the year, Jim Holanda, Astound's CEO, said.

"We've had this vision for a long time," Holanda said of the brand shift. "It's the worst-kept secret in the industry in that we're been referring to ourselves as Astound in every press release for the last year and a half. But now customers in the community we do business with will know as well...It really now makes sense to unite all of these in the course of the first half of this year under our new Astound brand name."

Holanda said everything's lined up for the change, which will span across bills, company uniforms, signage and trucks, and will be backed by a media campaign covering TV, radio, billboards and direct mail. "It's a full go," he said.

The recently acquired WOW systems and Harris Broadband properties will cut straight over to the Astound Broadband brand by this June or July.

A nod to FedEx

Holanda said Astound modeled the branding strategy after FedEx's approach with Kinko's  those acquired stores used combined branding for a period before being recast as FedEx Office. Holanda expects the "powered by" feature in the RCN, Wave and Grande markets to be present in their respective markets for a year to 18 months.

The company's business services unit will unify as Astound Business Solutions and not use the "powered by" descriptor in the regional markets. "The rebrand, I think, will really help the commercial and business services side," Holanda said. To amplify that point, he notes that the company has large deals that cover Astound's full geographic footprint and, in some instances, range beyond its service footprint.

Pricing and packaging to be tailored to the market

But don't expect Astound Broadband to unify its pricing and service packages. The company will continue to tailor those to match the diverse competitive characteristics of its individual markets. Astound Broadband is an incumbent provider in about half its markets and is a challenger/overbuilder in the other half.

"Being able to sell a broadband service in New York City against a Spectrum (Charter Communications) and a Verizon is a different proposition versus selling broadband service where you only compete against a Frontier or a CenturyLink DSL service," Holanda said. "Because of that uniqueness on a market-by-market basis, we'll continue to price differently so that we remain highly competitive in all the markets we do business."

The Astound Broadband announcement comes straight on the heels of Atlantic Broadband's rechristening itself as Breezeline.

Holanda also discussed some ideas and strategies in the works as Astound Broadband pushes ahead with the brand change.

On the video side, the company intends to transition 100% to an IPTV platform. Astound Broadband, a longtime TiVo partner, has already introduced that product at RCN and Grande and, more recently, at EnTouch.

The approach with broadband will vary. Astound Broadband will build fiber-to-the-premises (FTTP) networks in greenfield areas. In markets with hybrid fiber/coax (HFC) networks, it will squeeze more juice out of its DOCSIS 3.1 infrastructure (particularly in the upstream direction) ahead of anticipated DOCSIS 4.0 upgrades.

"For our traditional HFC markets, going to 4.0 is probably going to make the most sense," Holanda said, noting that it's still difficult to justify the capital costs of upgrading most of the company's HFC markets to FTTP.

Much of Astound Broadband's HFC infrastructure is relatively new, as it was initially developed as a competitive overbuilder and, therefore, tends to have higher fiber density counts when compared to older HFC plant.

"Given that they are newer and have that fiber capacity, I just think DOCSIS 4.0 is going to be the ultimate way to go," Holanda said. But he allowed that FTTP upgrades might make sense in some of Astound Broadband's older, incumbent markets.

No new M&A is imminent, but Holanda said he's got his ear to the ground. "We still feel that there's a lot of opportunities out there and we continue to remain active," he said.