Have We Reached Peak Ericsson?

Börje Ekholm's job is not far from done. When the unflashy Swede took charge of Ericsson at the start of 2017, it was heading for an operating loss that year of 38.1 billion Swedish kronor ($4.2 billion) on declining sales. His mission, he had told investors, was to restore profitability. Ericsson's operating margin fell off a cliff during his first year in the CEO job, hitting -19%. But Ekholm kept his sights fixed on a target of 10% in 2020 and 12% in the long run. With the figure up to 6% for the recent third quarter, from 0.3% for the second, the Swedish equipment vendor's recovery at last seems assured. (See Ericsson Corruption Scandal Sullies Strong Q3.)

The trends are all moving in the right direction. Operators in North America are starting to invest in next-generation 5G mobile gear, after the spending hiatus post 4G rollout. Customers in other countries are expected to follow in 2019. Ericsson AB (Nasdaq: ERIC) is nearly halfway through an overhaul of digital services contracts that should help it realize profitability targets. Thanks to a similar shake-up, its managed services business has turned a corner, reporting a small third-quarter operating profit after racking up losses in 2017. (See Ericsson Back in Profit After Fierce Cuts & 5G Action.)

But the turnaround has come at a heavy cost and will leave Ericsson smaller than it has been since 2010. Nearly one in five employees has been laid off in the last couple of years, giving Ericsson an overall headcount of about 95,000 at the end of September. The company has jettisoned its cloud hardware business and some of its media assets after they became a painful drag on performance. It is a more focused player, but one whose fortunes are bound more tightly than ever to the market for radio access network (RAN) products and services. (See Ericsson Stuck in Loss-Making Rut, Offloads Majority Stake in Media Unit.) 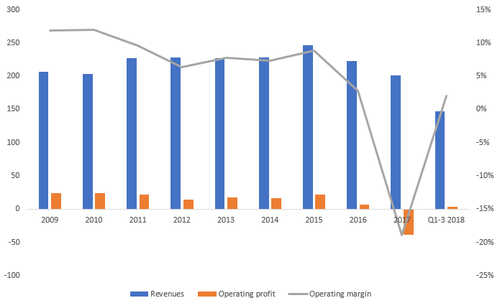 Despite interest in 5G, Ericsson does not seem to anticipate much growth in that market over the next four years. Dell'Oro, a research company Ericsson cites in its latest earnings report, expects overall RAN sales to rise at a compound annual growth rate of 2% between 2017 and 2022. Ericsson could always beat this forecast: For the third quarter, it reported a 5% organic increase in network sales, against Dell'Oro's projection of a 2% market decline for the full year. Yet Ericsson also warned investors last year that its overhaul will reduce total sales by SEK10 billion ($1.1 billion) in 2019, an amount equal to 4.5% of the sales figure for 2016.

This all points to a future as a smaller but more profitable company. In fact, Ekholm's plan could make Ericsson look rather like it did in 2010, when sales were SEK203.3 billion ($22.5 billion) and a margin of 12% delivered an operating profit of SEK24.4 billion ($2.7 billion, excluding any joint venture activities). The danger for Ericsson is that a technology shift, combined with a series of regulatory and competitive challenges, portends the start of a long decline. Ericsson, in other words, may be about to peak.

Open up
That industry shift is one driven by customer demand for lower-cost and more interoperable gear. Telcos, like any other business, always want a better deal from their suppliers. But this time the request seems to carry more urgency. Fueled by consumer addiction to services like Netflix and YouTube, the data traffic load on telecom networks is growing exponentially. Yet telco revenues barely change from one year to the next. Axel Clauberg, a senior technology executive with Germany's Deutsche Telekom AG (NYSE: DT), reckons the trend will erode profitability if telcos keep building networks in the same way. (See DT's Terastream: A Bigger Splash?)

The answer, telcos believe, is a more open, software-based and "virtualized" network. On the mobile side, there is growing unhappiness about "closed" interfaces that force any telco to buy radios from its supplier of signal processing equipment (or from that supplier's ecosystem). The world's biggest operators have set up a group called the Open RAN Alliance (ORAN Alliance) that is pushing for change. If all works out, an operator will eventually be able to purchase radios off the shelf from all sorts of different manufacturers. Thanks to RAN virtualization, it could also process signals using commodity servers housed in data centers, rather than dedicated equipment at a radio site. Deutsche Telekom has previously talked about taking advantage of these new developments to cut its RAN bill in half. (See Why Resistance to the Open RAN May Crumble.)

Back in the Black 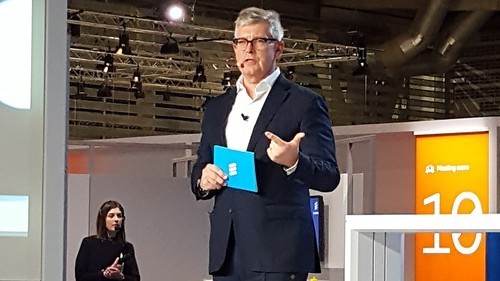 Ericsson's Börje Ekholm has restored profitability at the Swedish vendor.

This sounds like bad news for Ericsson and other traditional equipment vendors. But there are major caveats. The technology is largely unproven, for one thing, and might not deliver the cost savings promised or the performance levels required. Indeed, telcos are worried about the operational burden that would come with managing lots of vendors in a virtualized network. Moreover, a thriving marketplace for so-called "white box" radios is unlikely to be a reality for many years given the strong ecosystem that has built up around Ericsson, Nokia Corp. (NYSE: NOK), Huawei Technologies Co. Ltd. and, to a lesser extent, ZTE Corp. (Shenzhen: 000063; Hong Kong: 0763). (See Orange: Still No Clear Business Case for vRAN and vRAN Tech Hits Resistance at SK Telecom.)

But the twin threats of openness and virtualization cannot easily be dismissed. Ericsson has attended ORAN Alliance meetings and is now considering its future relationship with the group, it recently confirmed to Light Reading. Understandably wary, it has probably figured that a stubborn refusal to heed new customer demands would prove far costlier than adaptation, especially if its chief rivals are less resistant to change. Nokia is one that already appears to have joined the ORAN Alliance. All told, there seems little doubt that a shift to more open and virtualized networks will have some impact on Ericsson and other traditional equipment makers. The uncertainty is just how severe it will be. (See Ericsson Weighs ORAN Alliance Membership.)

Next page: Rivals old and new

1 of 2
Next Page
Like what we have to say? Click here to sign up to our daily newsletter
Related Stories
COMMENTS
Newest First | Oldest First | Threaded View
Add Comment
Be the first to post a comment regarding this story.
EDUCATIONAL RESOURCES
sponsor supplied content
Why Telcos Need to Embrace a Digital Transformation
Educational Resources Archive
More Blogs from Morris Lore
Taxpayers on hook for open RAN tab that must stink to investors