HUNTSVILLE, Ala. -- When CenturyLink rolled out its SD-WAN product last fall, the company used its relatively new minimum viable product or MVP network strategy, enabling its customers to co-develop the service, and use their feedback to improve it in later iterations, Executive Vice President and CTO Aamir Hussain said here today.

Speaking in an interview following his keynote speech at Adtran Connect, Hussain said CenturyLink Inc. (NYSE: CTL) brought the MVP approach over to the network from its cloud operation, where a dev-ops approach is commonly used. And its customers approved.

"Our SD-WAN service has now gone through two major iterations and the product has changed a lot based on customer feedback," he said. "It is a culture shift but customers actually like it because they like to co-invent and co-develop stuff with us because this is a brand-new field, and they don't know what they don't know. They don't want to go buy something very specific and then be stuck with it." 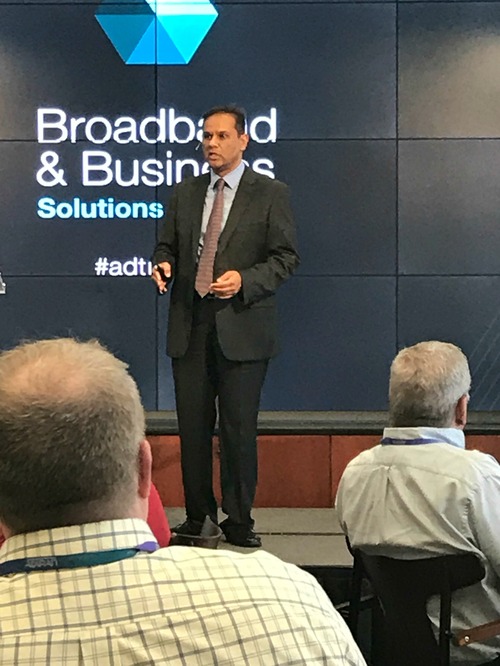 CenturyLink invites customers to be part of a proof-of-concept option that lets them "try before they buy" a new service and then uses network promoter score surveys to evaluate both the transaction and the product, watching to see when those are moving positively to determine when to push the service forward, Hussain said.

"It's more work for us, but it's worth it," he said. In fact, as Hussain told the Adtran Inc. (Nasdaq: ADTN)-invited audience, CenturyLink has seen "more customer demand for SD-WAN than any other product."

CenturyLink's OTT service is also being rolled out using the MVP process, Hussain says. The company started with employee trials and built that feedback into the service they announced earlier this year. (See CenturyLink Joins Streaming Parade.)

This approach is part of CenturyLink's move to transform its network into the platform that is software-defined and lives in the cloud, from which the company can provide its own services as well as working with partners, Hussain said. CenturyLink has been on this journey for several years, building on the programmable network nodes that are now in their second iteration, and currently cover 60% of CenturyLink's network, he said.

"Fifty-four percent of our services are actually software-driven today," Hussain said. "If it is an ethernet service, you don't have to call anyone, it can be delivered on-demand."

Legacy services still take weeks, if customers already have fiber, but newer services can be delivered in an hour if the infrastructure is already in place, he added.

CenturyLink is building its own abstraction layer as part of its network transformation, Hussain said, and actually used some elements of AT&T Inc. (NYSE: T)'s ECOMP, but needed to build on that. "We are trying to drive Netconf and Yang models so we are building on it for our own infrastructure, you can't just use what was made open source. It can help us to an extent, there are certain things we have to do ourselves."

CenturyLink will consider joining ONAP, he added, to help drive scale and standardization.

"At the end of the day we are a services company," Hussain commented. "We are starting the process by doing things on our own but our real goal is to move things one way or the other and the more people will join, the better will be our cost structure.

Hussain admitted that CenturyLink faces a major challenge in replacing the profit margins generated by diminishing legacy services revenue with newer strategic services. The company needs to sell $2.50 of newer strategic services for every $1 of lost legacy revenue to be able to keep the same margin and generate the free cash flow needed to support its dividends, he said.

The other option, which Hussain and his team are also pursuing, is using network transformation to lower cost, through automation. The goal is making services available through portals on-demand, without truck rolls or lengthy provisioning periods.

The company will be more enterprise service-driven after the Level 3 Communications merger is complete, with 75% of its revenues coming from enterprises, he said. But Hussain is quick to add that consumers remain important to CenturyLink and it continues to move forward on plans to get 10 megabit services out to all its customers, including those in rural areas.