Bell Canada's move to be the first company bringing open-source ONAP code into production is the result of a year-long challenge the company set for itself to make its dev-ops process pay off. But it is also intended as a signal to the broader industry that the massive open-source software platform can be practically deployed, in hopes of attracting more participation and contributions, a BCE executive says.

In order to do that, he tells Light Reading, Bell developed the software that became the ONAP Operations Manager (OOM) and contributed that code to the open source group, intending to make it easier for other companies to embrace ONAP by breaking it down into consumable pieces.

"When we first got ONAP -- we were actually part of Open ECOMP initially -- it was really difficult to install, there were a lot of things to coordinate and the footprint was pretty big," Shenouda says. "We were on this dev-ops journey, we want to create a CI/CD pipeline to enable us to first go slow to build it, but then go fast afterward. So the first thing that came to our mind was that we needed to Docker-rize it, to containerize it, because it will help to reduce the footprint."

Using a dev-ops process that included team members from vendors including significant support from Amdocs, Bell's NSO went through a series of iterations to develop OOM, which was included in the ONAP Amsterdam release, though not as the default, he notes. "We hope that happens before the Beijing release next year," Shenouda says. He believes this represents a solution for companies that are struggling to bring ONAP to production because of its size and scope.

"ONAP can be seen as big and hairy and complex and it is," he comments. "We saw people were struggling, the same struggle we had to install it, in some cases struggling for months with getting the thing operational and the first use cases running on it."

As part of its Network 3.0 transformation, Bell's approach was to identify a problem that needed solving and figure out how the ONAP platform could help, and which parts of platform could be part of the solution, Shenouda says. The data center tenant network provisioning issue was chosen because it was badly needed -- not because it was the simplest problem, he says -- and the dev-ops team got to work, focusing on creating a production product. 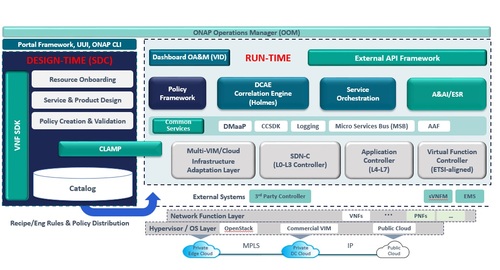 They ended up using a subset of ONAP's modules, including its Service Design Center, its Service Orchestration module, the SDN-C (which for Bell is OpenDaylight), its Active and Available Inventory (A&AI), along with some common services and the ONAP portal itself.

Shenouda says Bell also has the Data Collection, Analytics and Events (DCAE) module and the Policy Framework lined up in pre-production status for future projects.

What Bell's NSO team produced in fairly short order was a Minimum Viable Product that will go through further iterations to be improved and refined, he says.

"It's not our first app -- we have had a few proofs of concept and customer trials we did for other services," Shenouda says. "This was the first one we brought to production and the reason was there an immediate operational need to help automate the operations around our data centers. Also, we set a specific challenge for the team at the beginning of the year to be in production by year-end and the reason was not as an artificial date but to be able to manage and operate the platform as well. Our team is running as dev-ops and we are learning -- it is a journey we are on -- we wanted to get to the ops part quickly so we don't build something really big and then decide how to operate it."

Working in a new way was certainly one of the challenge of this process, but he says everything Bell has learned along the way is being applied going forward, including the experience developing and contributing code, something at which the company is still new at. Shenouda says he has been encouraged by the growing number of contributions being made to ONAP, and hopes Bell's announcement will further encourage participation in the open source group.

Next up for Bell is activity on two fronts: On the data center tenant network provisioning front, the company wants to automate incident management and service assurance in general to enable problems to be fixed automatically but also improve the customer experience with real-time network traffic engineering based on analysis of data collected, he says.

More broadly, the challenge for 2018 is to "put this platform in the hands of our operations team" so that it can be used in every domain of the business.

One benefit of going through this process was that Bell now has a talent pool including more people who are both software- and network-savvy, and that bodes well for its ongoing transformation processes, Shenouda says.