Despite some optimism that automation will "free up" staff for more interesting activities, telecom operators are automating their network operations mainly to reduce headcount, according to nearly a third of respondents to a recent Light Reading poll.

Asked what the principal reason was for automating network operations, some 31.3% of survey takers picked "reducing headcount," making that option the most popular of the six choices available.

Another 29.39% favored the closely related "cutting spending on manual processes," which holds out the possibility of cost savings that do not take a heavy toll on the workforce.

What Is the Principal Reason for Automating Network Operations? 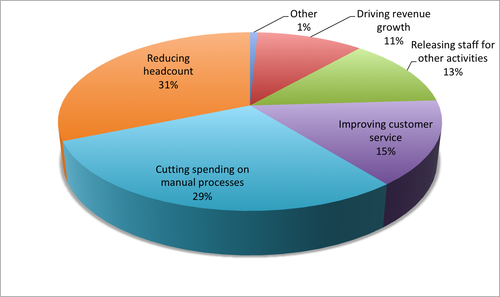 Even so, the results clearly show that a substantial majority of the 262 survey takers view automation primarily as an efficiency tool, likely to have a long-term impact on telecom sector employees, rather than a means of improving services or boosting sales.

Just 10.69% of respondents reckon operators are automating network operations mainly to drive revenue growth, with 15.27% saying it is chiefly a way to improve customer service.

A total of 33 respondents, or 12.6% of the total, believe network automation is largely about releasing staff for other activities. And only two chose "other" (without indicating in comments what this might be), suggesting that Light Reading had covered most of the possible bases in the options it presented.

As feedback noted, there is obviously some overlap between the various options, but each response indicates at least a slightly different priority. For some operators, for instance, the ability to release staff for more important and less routine activities is the overriding objective, even if companies also realize cost savings from such reorientation. And job cuts will inevitably result in lower spending on manual processes.

Nevertheless, there may be surprise that only about a quarter of respondents chose revenue growth or improving customer service as the primary objective. The automation of network operations, through investments in software and virtualization, is aimed partly at giving service providers the "agility" and "fail-fast" capabilities of Internet companies like Facebook and Google (Nasdaq: GOOG). Some industry figures clearly believe this will allow operators to better address new customer needs.

The results are clearly a worry for employees on the networks side. The telecom industry has already slashed lots of jobs over the last couple of years, but the axe appears to have fallen heaviest on customer service departments. With network automation, it looks poised to hit other parts of the telco business in the next few years.

During a conference last month, Elisa, Finland's biggest mobile operator, claimed to be running a "zero-person" network operations center following investment in automation tools and capabilities. That may be a sign of what's to come. (See The Zero-Person Network Operations Center Is Here (in Finland) and Finland's Elisa is selling its automation smarts to other telcos.)

Joe Stanganelli 4/28/2018 | 12:03:14 PM
Re: SON of a... @Phil: Not to mention that the blue-collar industries have enormous talent shortages these days that AI is not making up for.
Reply | Post Message | MESSAGES LIST | START A BOARD

Phil_Britt 4/17/2018 | 1:02:35 PM
Re: SON of a... If they are knowledgeable rather than just being someone who reads off a knowledge base, they can likely get jobs elswewhere. There will always be companies that prefer the human touch, though there will be stiff competition for those positions, even though pay will be low.
Reply | Post Message | MESSAGES LIST | START A BOARD

kq4ym 4/17/2018 | 12:45:10 PM
Re: SON of a... It's going to be a very worrisome future for lots of folks in customer service as the "axe appears to have fallen heaviest on customer service departments." If in fact the predicted zero staff service departments come true, one might wonder where those folks are going to work next?
Reply | Post Message | MESSAGES LIST | START A BOARD

Phil_Britt 4/5/2018 | 9:48:02 PM
Re: SON of a... As automation advances, headcount will drop in several industries -- from telecom to radiology to warehousing. New jobs in other sectors are being created, but whether or not these are enough to supplant the jobs being lost is questionable.
Reply | Post Message | MESSAGES LIST | START A BOARD