WAILEA, Hawaii  T-Mobile may finally be ready to find a serious use for the millimeter wave (mmWave) spectrum it's had stashed on a shelf. And it doesn't involve phones.

Instead, the carrier is now looking at using its mmWave holdings to upgrade its fixed-wireless service in high-demand areas, two T-Mobile executives said in an interview at Qualcomm's Snapdragon Summit here last week.

Finding a role for mmWave in FWA

"We've gotten to the point where we've got waitlists for our services in a lot of areas," said Grant Castle, vice president for device engineering at the Bellevue, Washington, carrier. "In a few areas, we may find that we need to augment it, and millimeter-wave could be a part of that."

He and his colleague Karri Kuoppamaki, T-Mobile's senior vice president for technology development and strategy, expanded on earlier hints from the carrier about potential FWA applications using mmWave. For example, T-Mobile's Neville Ray suggested earlier this month that the carrier might "bring new spectrum assets like millimeter wave to play in this environment."

Said Kuoppamaki: "It's a tool in the toolbox that you apply in areas where it makes sense."

He suggested that T-Mobile could meet rising FWA demand by optimizing deployment of its roughly 1GHz worth of mmWave spectrum for fixed recipients.

"We can do tweaks like maybe more aggressive modulation and coding-scheme selection because you don't have to take mobility into account," Kuoppamaki said. "We can do multiuser MIMO maybe more effectively in the fixed wireless domain."

These changes, he noted, don't have to require revising core 5G standards. Castle, in turn, pointed to T-Mobile's control of the customer equipment in FWA as a key enabling factor.

That's a much more solid endorsement of mmWave than the carrier, which spent about $1.7 billion across three FCC auctions for mmWave spectrum, offered at last year's summit. At that time, Kuoppamaki all but ruled out further investments in mobile mmWave service.

T-Mobile's comments about mmWave FWA are noteworthy considering Verizon started its 5G efforts focusing on FWA services in mmWave spectrum in 2018. However, Verizon has repeatedly said it's building one network for both fixed and mobile applications, whereas T-Mobile officials have suggested building a mmWave network dedicated for fixed services. 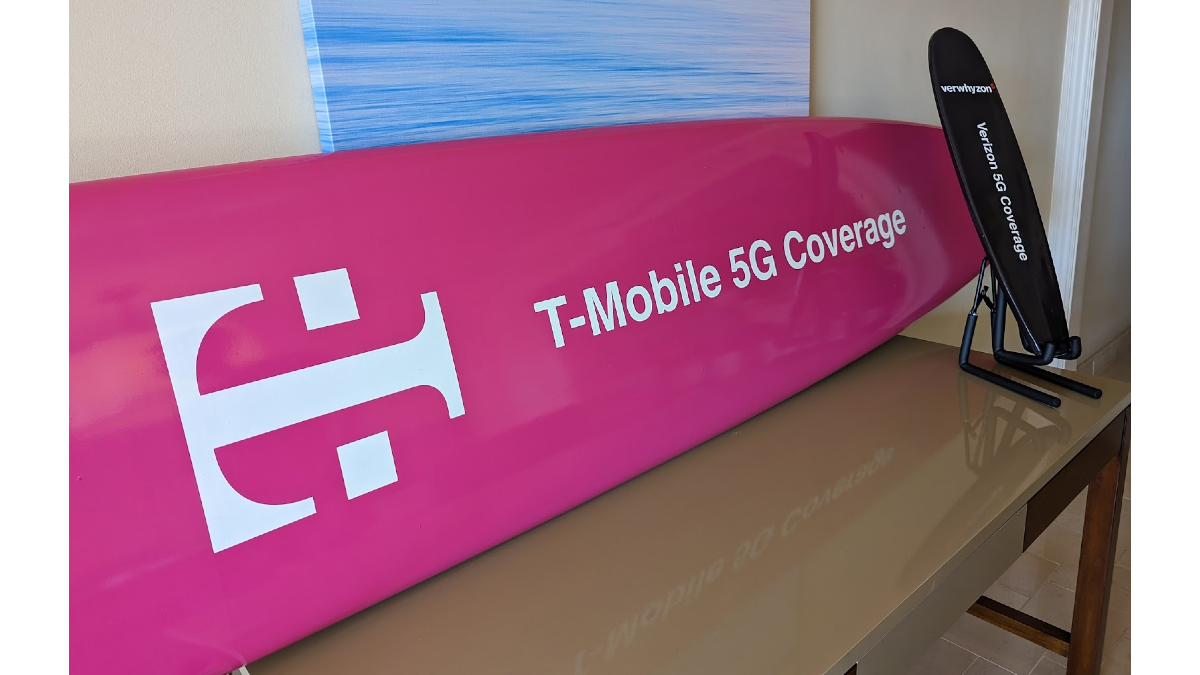 T-Mobile brought two surfboards to Qualcomms Snapdragon Summit: a full-size magenta board to represent its 5G, and a dainty black board for Verizons.
(Source: Rob Pegoraro/Light Reading)

But the carrier's most recent 5G upgrades don't involve speed, per se. In June, T-Mobile announced the start of commercial voice-over-5G service, aka Voice over New Radio ("VoNR" for short), in Portland and Salt Lake City, with the promise of expansion to "many more areas this year."

That pace may have slowed since, with that wider expansion now set for 2023.

"We're doing small little trials in a few other cities," Castle said. "Our expectation in the first half of next year is that we'll start going much more broader."

Saying that his employer was "being cautious" in its testing, Castle defined a successful VoNR rollout as one that customers couldn't hear: "If we do our job, they won't know."

The standalone 5G architecture that makes VoNR possible got a major boost at T-Mobile earlier this month when it launched its midband 5G service to a standalone architecture.

"The experience on data is a lot smoother," he said, by virtue of the network not having to downshift to 4G to set up a 5G connection. Plus, this allows carrier aggregation of three channels of T-Mobile's midband 5G (two of 2.5GHz, the third on 1.9GHz), which in a June test delivered 3 Gbit/s downloads.

Kuoppamaki said the end goal here is being able to forget 4G: "It's another step towards all-5G architecture."

Coverage outside cities has historically been a relative weakness at T-Mobile, but the company has been working to fix that as part of the rural strategy it outlined last year.

"We're continuing to build, with new sites that we got from Sprint, with new construction sites," Castle said.

Kuoppamaki said T-Mobile is leaning on artificial intelligence and machine-learning models to identify the places where it could have the biggest boost in coverage.

As Castle put it: "Some of these things, honestly, are probably only space options."

Kuoppamaki said the two companies can start testing towards the end of next year. However, that testing is contingent on a successful launch of SpaceXs giant, reusable Starship rocket, and a successful rollout of Starlink's larger V2 Starlink satellites that include the required hardware to support T-Mobile's spectrum.

"It feels like it's a plan that we can execute on together," he said. "We hope that in the 2024 timeline we would basically have national coverage."