Nokia has been crowing about a new study that ranks it second in the world for ownership of patents deemed essential to the 5G standard. The research by IPLytics comes weeks after Nokia achieved the top spot in a separate 'essentiality' ranking carried out by PA Consulting. Jenni Lukander, the head of Nokia's patents and licensing division, said the findings provided confirmation of Nokia's 5G leadership  something critics have questioned after various setbacks for the Finnish vendor in the global 5G market.

Equipment makers like to show off the size and weight of their patent portfolios much as gym freaks flaunt their muscles or soccer players their supercars. But there is more at stake than mere 5G machismo. In 2019, Nokia made about 1.5 billion (US$1.8 billion) in revenues from a mixture of patent and brand licensing. Ownership of important patents puts companies in a stronger negotiating position with rivals and can minimize costs, including payments for litigation. An ongoing dispute with Samsung that could reduce Ericsson's quarterly operating profits by up to $175 million shows how much there is to lose.

Showing off their 5G patent portfolios is main form of vendor machismo.

Patents ownership has acquired perhaps more importance in light of recent global turbulence. Even after Donald Trump's departure from the White House, there remains a risk that technology standards may eventually split along geopolitical fault lines. Signs that European and US companies have lagged China on technology innovation would not be a good omen.

But the latest studies championed by Nokia do little to dispel the murk that surrounds the patents podium. The contestants are partly to blame for that. China's Huawei, in particular, loves to scream out big numbers of patents in its annual reports, the equivalent of revving the supercar engine at a junction. In 2019, it proclaimed in a blood-red font, there were 85,000 active patents on its books. Nokia more quietly cited 20,000 patent "families" in its own report, while Ericsson laid claim to "more than 54,000 granted patents." 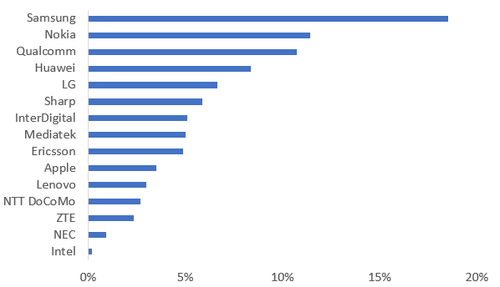 While Huawei and Nokia have a broader portfolio of network products than mainly mobile Ericsson, these headline figures have tended to put Huawei way out in front on 5G patent declarations. On the basis of 5G families, the latest research by IPLytics ranks it as the top 5G-patent-declaring company by some measure, with US chipmaker Qualcomm grabbing second place. Anyone looking at these numbers in isolation might assume Huawei is winning the event.

Some patents are more essential than others

What's clear to experts, however, is that certain patent filings hold far greater value than others. Some patents are as integral to 5G as mint leaves are to a Mojito. Others are merely the straw in the glass. The trick is discerning which patents really matter  which are "standard-essential," in industry parlance  and which do not. Researchers at IPLytics, PA Consulting and similar companies have been attempting just that.

The trouble is the lack of agreement. IPLytics and PA Consulting both seem to hail Nokia as one of the 5G frontrunners, in what is obviously an encouraging verdict on the Finnish company's performance. But a slightly older study by GreyB ranks it only joint fourth when it comes to ownership of essential patents. GreyB finds a correlation between declarations and essentiality, awarding the gold medal to none other than Huawei. 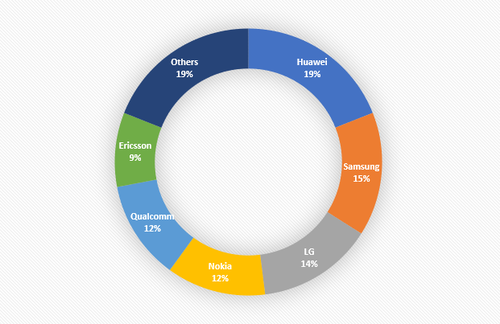 A possible explanation could be divergence on what counts as essential. Richard Windsor, an analyst with Radio Free Mobile, took issue with GreyB's analysis last summer. Its essential category, he surmised in a blog, seemed to include genuinely critical 5G breakthroughs as well as technologies of less importance. Taking an airplane as an analogy, Windsor says there are innovations that keep the plane flying and ones used for seats and drinks trolleys. Both allow the plane to "fulfil its function," he wrote. "But the IP [intellectual property] for the engines, ailerons and wings is much more essential than the seats and drinks trolleys." The implication was that GreyB did not distinguish.

This is just one view, though, and it does not vindicate the work done by IPLytics or PA Consulting. One of Windsor's beefs about GreyB's analysis was that both Huawei and Samsung would have had to leapfrog other companies in the transition from 4G to 5G. He deemed that improbable because 5G relies on much of the same "core" IP as 4G, including the OFDM (orthogonal frequency division multiplexing) coding system. Yet while the IPLytics study kicks Huawei off the podium, and into fourth place, it puts Samsung on top.

Ericsson fares relatively poorly in both studies. GreyB ranked it below Huawei, Samsung, LG Electronics, Nokia and Qualcomm, while IPLytics sticks it down in ninth place, behind all those companies as well as InterDigital, MediaTek and Sharp. But it tops a 2019 essentiality ranking from Bird & Bird, a law firm, beating Samsung into second place and Qualcomm into third.

Bird & Bird seemed to advise against relying too firmly on that particular table. Different from the other experts, its starting point was to compare several studies that have been used to support claims of Huawei's technology leadership. Many of these, it said, were "too simplistic" and failed to distinguish between essential and non-essential patents. Nor was there a consensus on what constitutes a standard-essential patent, according to the lawyers.

Market watchers are none the wiser. The only lesson observers can really extract from all this is to be skeptical of the rankings that appear. Their single point of consensus is regarding the identity of the patent owners, and what a small number dominate 5G. For all the talk of service provider involvement in technology development, Japan's NTT DoCoMo is the only one whose name shows up. Anyone worried about the power imbalance between operators and their suppliers will find little solace here.