US cable left another dent in the mobile market in Q1 2021 as operators drew in more than half a million mobile lines, doing so without heavy handset promotions and before the introduction of Comcast's new, aggressive pricing for customers on unlimited plans.

Comcast, Charter Communications and Altice USA combined to add 583,000 mobile lines in Q1 2021, the second highest quarterly total ever for the cable industry, according to MoffettNathanson's latest analysis of the US mobile market. 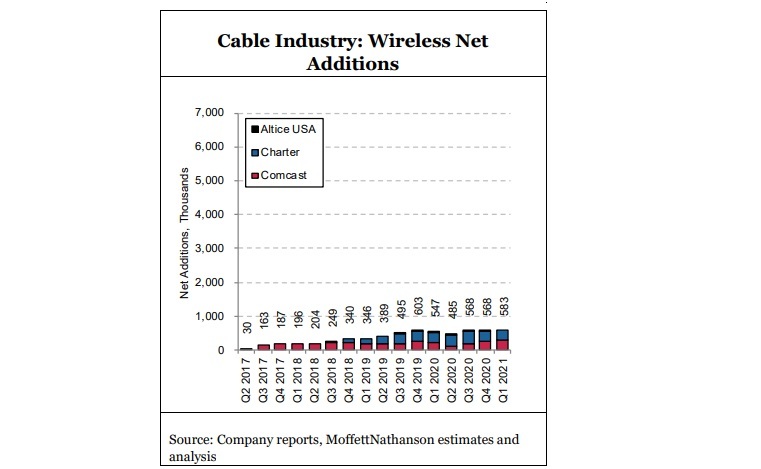 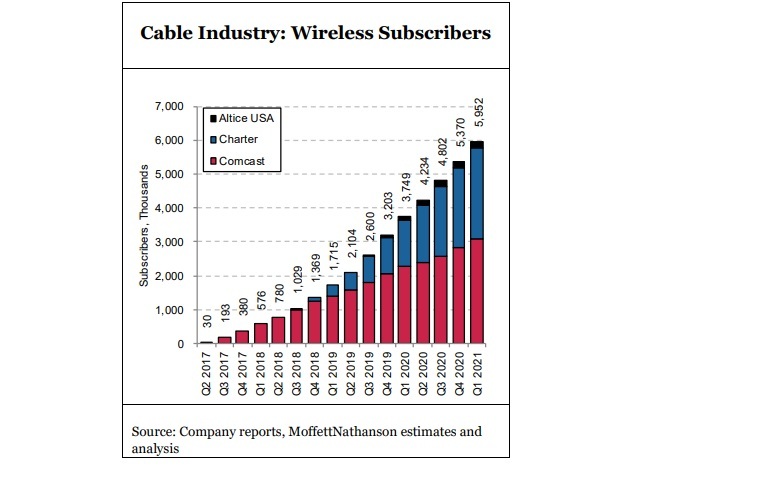 "Notably, the cable operators were able to achieve this growth rate without the kind of handset promotions offered by MNOs [mobile network operators], which makes their strong showing all the more impressive," Craig Moffett, analyst with MoffettNathanson, explained. 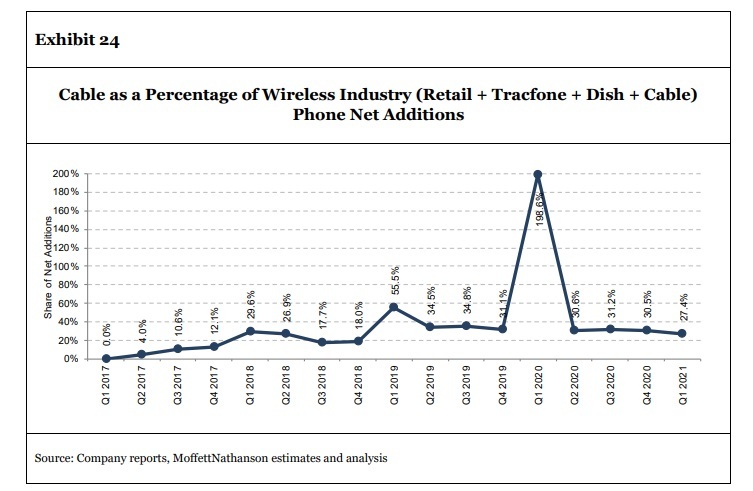 And more could be in store, given that the Q1 results were tallied prior to Comcast's launch of new, aggressive unlimited pricing that shrinks as customers add more lines. Comcast's new plan, introduced in mid-April, drops the per-line cost for unlimited data to $30 when customers take four lines (compared to a previous flat rate of $45 per month), and down to $20 per line for additional unlimited lines that are taken beyond the first four.

"Xfinity Mobile's new pricing per line is fully competitive with Verizon and AT&T for plans of all sizes, undercutting Verizon and AT&T's entry unlimited plans across all plan sizes and costs," Moffett noted. "They remain priced slightly above T-Mobile on three lines or more."

Comcast's updated pricing comes in the wake of a revised MVNO deal with Verizon.

Charter, which has the same MVNO deal and added 300,000 mobile lines in Q1 2021, has hinted that it intends to get more aggressive with mobile pricing.

"We will be driving price going forward," Tom Rutledge, Charter's president and CEO, said on the company's Q1 earnings call. "In the end, we'll have less expensive mobile products than most people."

While Verizon benefits financially from mobile gains from Comcast and Charter through the wholesale channel, Moffett believes Verizon will be forced to respond to cable's aggressive pricing because "investors, and Verizon itself, will ultimately demand that Verizon grow retail subscribers."

Q1 was also notable in that Comcast announced that the Xfinity Mobile business, which launched service in April 2017, had reached break-even on a standalone basis for the first time.

Cable's mobile economics should continue to improve as operators start to deploy CBRS networks strategically in dense, high-traffic areas. Both Comcast and Charter bid for and won licensed spectrum in the recent CBRS auction. Charter plans to build out its first CBRS network in a yet-unnamed market by the end of 2021.