Telco vs. Cable: Who comes out on top?

The US wireless industry has had a good run recently with service revenues increasing at a 3.3% CAGR between 2017 and 2021 after a dismal period between 2013 and 2017 when cumulative service revenues declined over $10 billion. This was helped in part by the widespread adoption of non-phone devices, both by consumers and industry, as well as consolidation in the industry and a resulting hardening of prices. Operators have spent nearly $125 billion in recent years to acquire spectrum and continue to invest heavily in building out 5G networks, yet no killer use case beyond FWA has gained traction (see part 1 of 3 for insights on recent wireless industry trends).

Part 2 of 3 assessed the state of the US cable industry and recent trends. The cable industry has been battered, with the 4 largest cable stocks suffering declines of 54% to 86% from their highs in 2021. Cord cutting continues unabated and the cable companies' pivot to vMVPD and streaming has been a mixed bag. More recently, residential broadband, long its growth engine, has been sputtering due to intensified competition from telcos upgrading to fiber and a competitive FWA offering. They have sought refuge in mobile and have started to take a meaningful share of net additions in phone subscribers. Yet, questions remain if an MVNO model will be able to drive long-term profitable growth (see part 2 of 3 for insights on recent cable industry trends).

So, let's look at the profit pools these players are chasing, their competitive positioning and the likelihood of success.

How attractive is the wireless industry?

The large revenue and profit pools, most recently approx. $260 billion in cumulative revenues at an EBITDA margin of over 35%, entice new competitors from time to time. Wireless service revenues alone were in excess of $200 billion in 2021 compared to approx. $82 billion of residential broadband revenues. 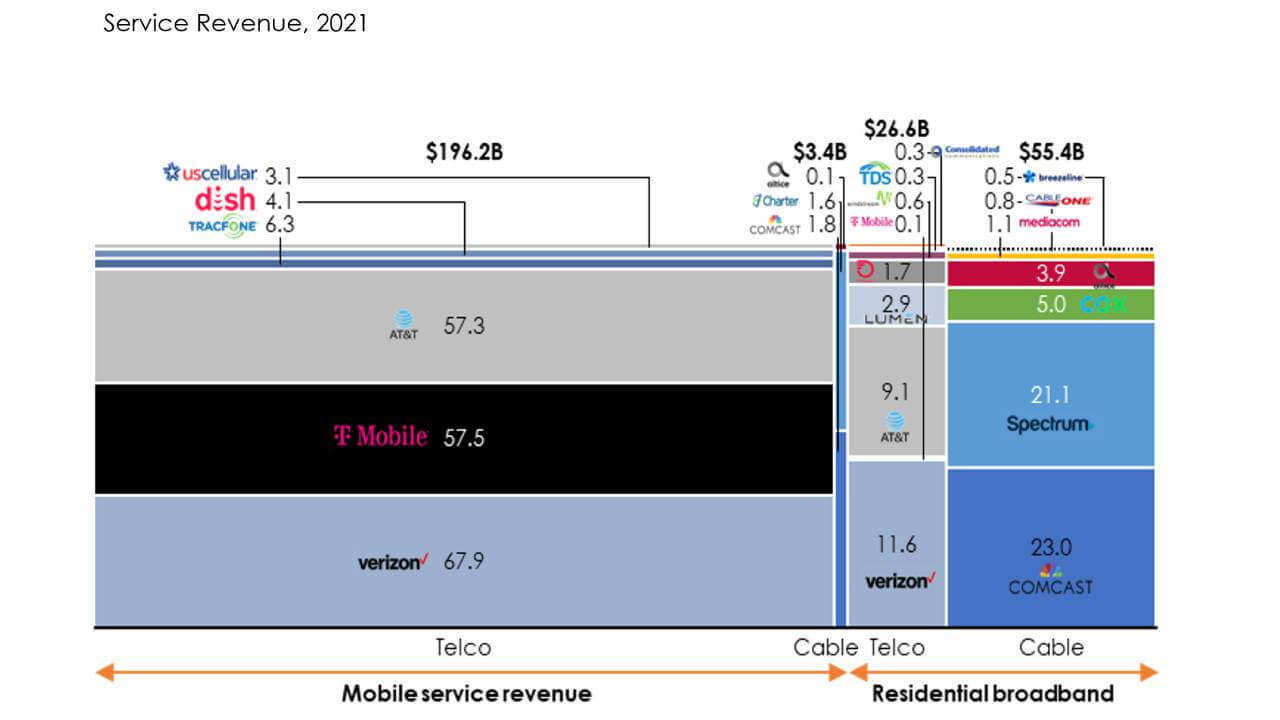 With the mobile service revenue pool nearly 2.5x that of residential broadband, the major cable companies, starting with Comcast in 2017 and subsequently Charter and Altice, have invested billions in search of their next growth engine. While the EBITDA margins for mobile services are lower than for residential broadband, it is still a much larger profit pool and is therefore very attractive for cable companies. 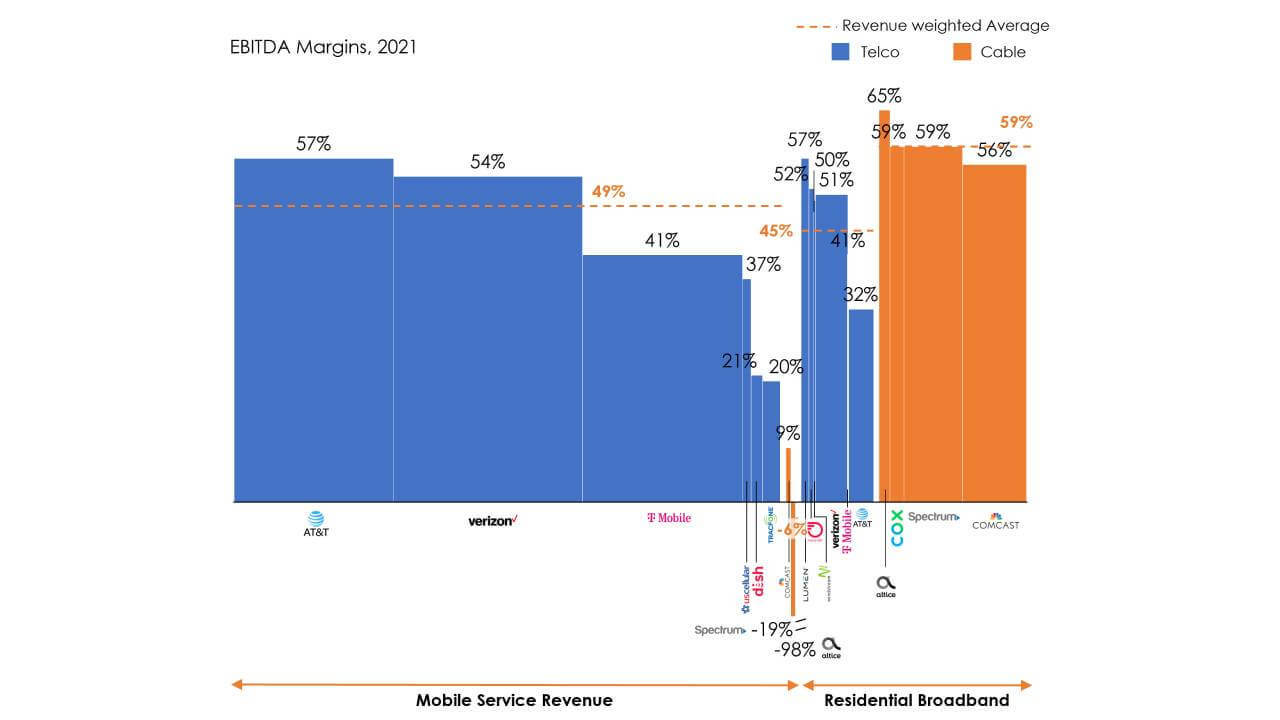 Will cable companies be successful in profitably growing their fledgling mobile business? How is their push likely to impact the incumbents? And most importantly, how will the incumbents respond?

How is cable's entry into mobile likely to shape up?

While some analysts are excited with the recent progress cable companies have made in mobile, the companies have barely made a dent on the industry's incumbents after nearly 5 years of trying. 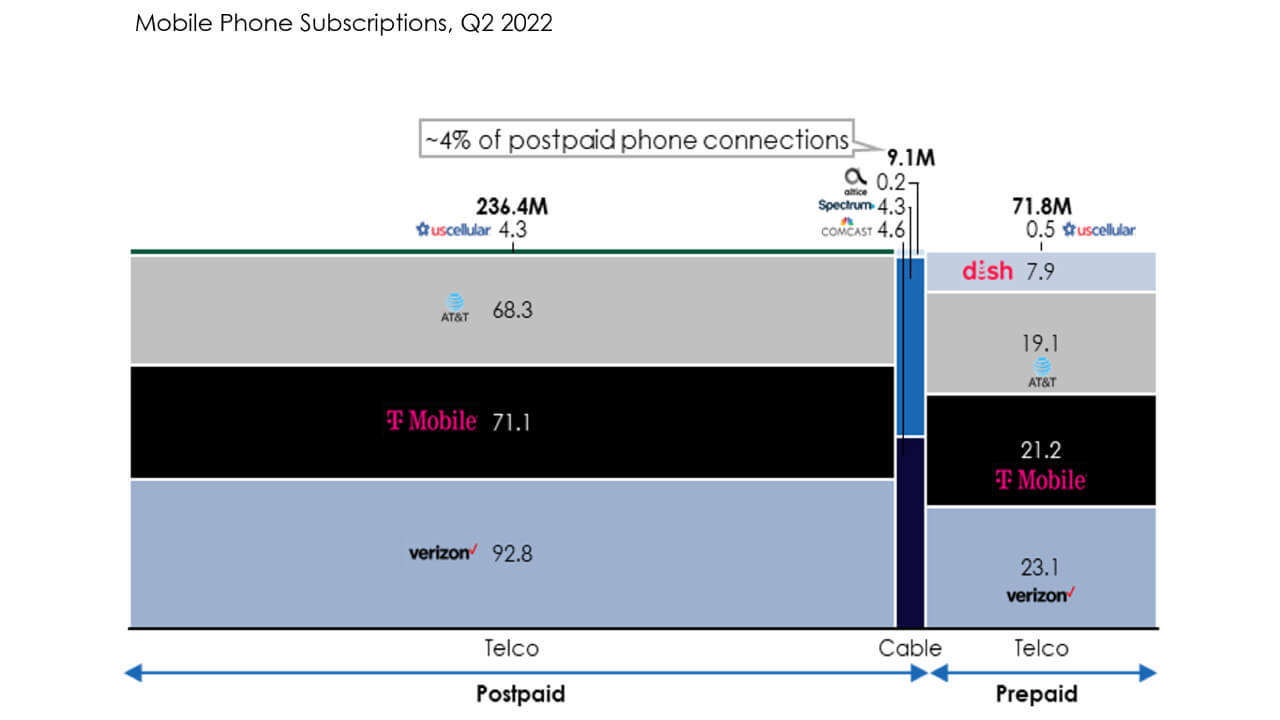 Looking forward, while the headline wireless subscriber count in the US is approaching 500 million and appears to be growing robustly, phone subscribers who drive the highest ARPU and the lion's share of service revenues are approx. 311 million, representing a 94% population penetration at the end of 2021. Additionally, with BYOD becoming more prevalent and fewer enterprises issuing a work phone, we expect industry net additions of the lucrative postpaid phone subscribers to grind to a halt. Furthermore, revenue streams from new use cases enabled by 5G have been a mirage and we expect competition among mobile operators to intensify.

However, cable companies do not necessarily have the freedom of action to significantly accelerate their subscriber acquisition. This is because the cable companies have not built their own networks and purchase wholesale capacity from the incumbents. After paying usage costs, there is not much room left for accretive margins. Tracfone, the largest MVNO in the US with over 20 million subscribers before being acquired by Verizon, had an EBITDA margin of under 20%. In 2021, with a cumulative wireless subscriber base of approx. 8 million and revenues of $3.4 billion, cable companies had a $200 million EBITDA loss!

While cable companies hoped to offload much of the traffic onto their Wi-Fi networks, the rapid growth in data usage and limited investments in expanding outdoor Wi-Fi have capped this upside. With COVID-19 receding further into the background and more employees heading back to the office, cable companies ought to see a sustained growth in cellular traffic - greater than overall wireless traffic growth.

Cable companies are now positioning CBRS PAL licenses as the panacea. Time will tell if this turns out to be the case, but they have a limited footprint of these licenses  Charter and Comcast have PAL licenses in 106 and 306 counties, respectively, skewed towards 2nd tier markets, not exactly where the bulk of wireless traffic is generated. With limited upside from additional offloading, we believe the argument will revert to using a mobile bundle to ring-fence their core broadband business. We're skeptical that containing churn alone in the face of increased competition from fiber and fixed wireless justifies growing this revenue stream burdened by a highly dilutive business model.

Can they get out of the trap? 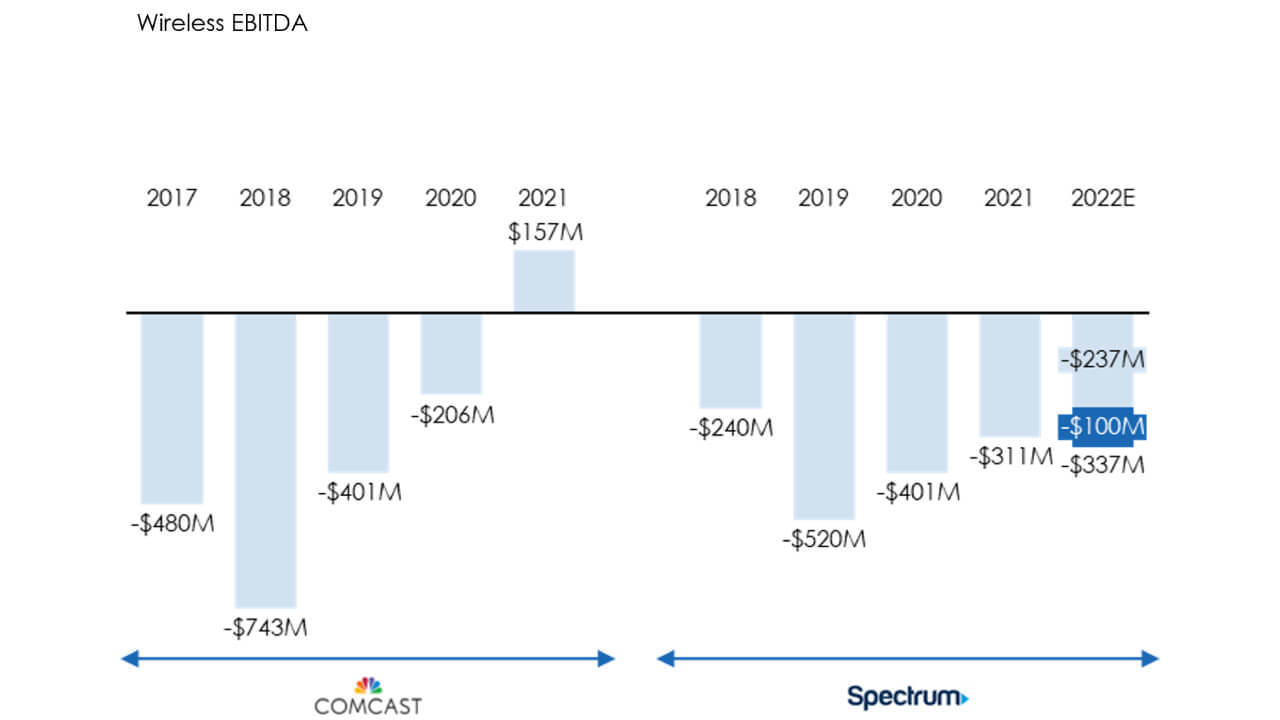 This said, wireless is becoming increasingly addictive for cable companies. In Q3 2022, wireless drove 53% of incremental YoY revenues for Charter and 44% for the cable communications business unit at Comcast. We think cable companies will continue their drive for subscribers for a while before uninspiring EBITDA margins force their hand in extensive rollouts of CBRS networks in a vain attempt to increase offloading. They may even consider rolling out networks using the unlicensed GAA tier where they do not own PAL licenses  this would not only increase the complexity of their network management but also impact the quality of service.

A more sustainable strategy might hinge on price increases to unlimited plans so new acquisitions skew to those self-selecting to metered plans alongside a concerted push in markets where they own PAL licenses. Absent some cherry picking by cable companies, investors will increasingly be left wondering when the mobile business will show 'em the money!

No amount of fine-tuning the wireless bundle will address the fundamental problem cable companies have - their growth engine of the past several years has been sputtering of late. This is compounding the stress on their toplines from the seemingly never-ending cord cutting. While the drivers are many fold, including "lower move activity," the key ones include:

Fiber: Telcos are investing massive amounts to upgrade their copper lines to fiber. After years of dismal performance when they donated millions of DSL subscribers to cable companies, all telcos but Lumen have turned net gainers in broadband by mid-2022.

FWA: 5G technology in concert with broad swathes of midband spectrum has enabled wireless companies to roll out a competitive home broadband offering. Fixed wireless access drove a whopping 78% of net broadband additions in the first half of 2022.

Market maturity: With approx. 80% of addressable households having wired broadband by year-end 2021, and a meaningful portion of the remainder being unviable for network expansion without some level of subsidies, there is less growth to be had vs. a few years ago.

COVID-19 pull forward: WFH drove a 50% increase in residential broadband additions in 2020 compared to the average over the prior two years. Despite an aggressive rollout of FWA by T-Mobile in 2021, cable companies held their own, but suffered from a bad case of hangover in 2022.

Unlike the cable companies' position in wireless, where they're upstarts and have to compete with one hand tied behind their backs, telcos are in a far stronger position to grow their residential broadband business with a base of 30% of subscribers. 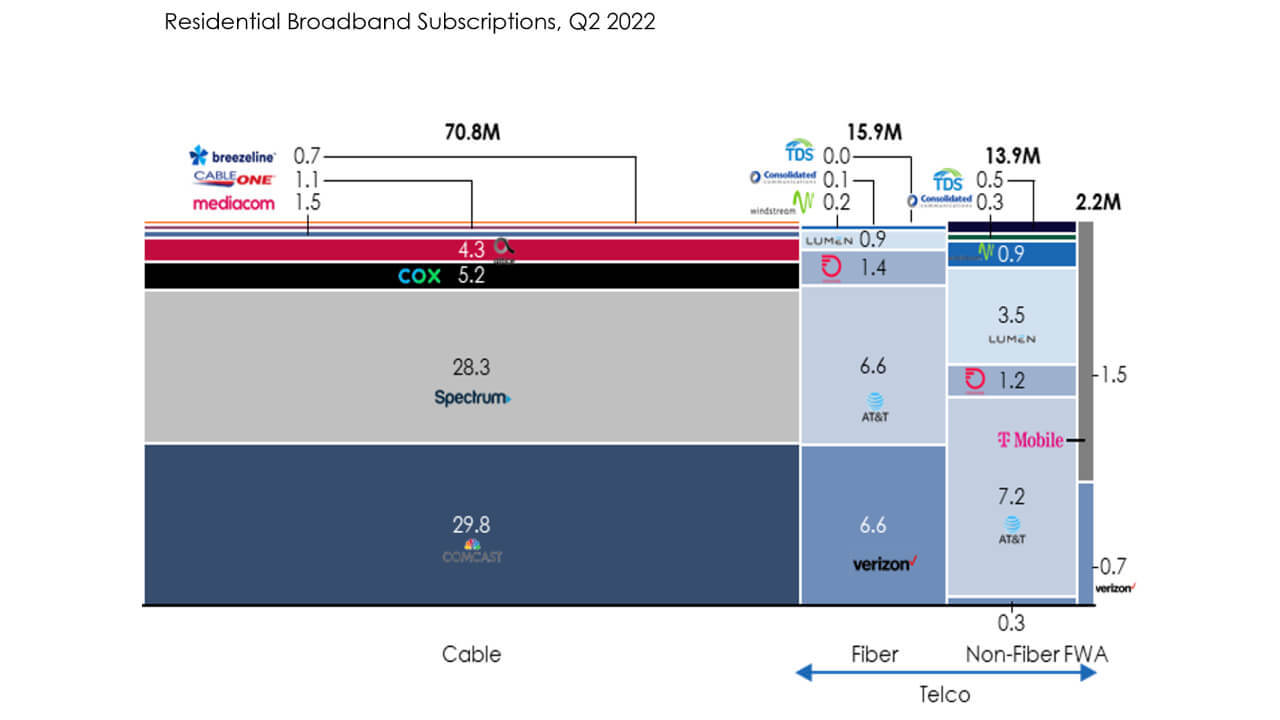 We expect the recent trend of net gains among telcos on the back of upgrades to fiber to only accelerate. With a superior product that offers symmetric uplink and downlink speeds, especially for new use cases that require far faster uplinks, the telcos are driving this home with consistent marketing. While there are no use cases that realistically need multi-gig speeds for the average household, we do not see any letup in the drive to 10Gs.

Is there light at the end of the tunnel?

To assess the outlook for cable companies and the outcome of the battle with telcos, we believe the following four factors are critical:

Subsidies: Between the Rural Digital Opportunity Fund (RDOF), USDA's Broadband ReConnect program and the Broadband Equity, Access, and Deployment (BEAD) program, over $55 billion in subsidies will be awarded to expand high-speed Internet access, enough to connect 20 million-plus unconnected households. Charter was the second biggest winner in the 2020 RDOF auctions. This gusher will no doubt be a positive for all industry participants and in theory, cable companies have as much of a shot to win these subsidies during auction. However, incumbent telcos with existing copper networks and right of way have a cost advantage across most of these unconnected areas. Yes, cable companies can be aggressive with their bids in auctions - winner's curse here we come. Advantage telcos!

Competition: Cable companies have feasted for over a decade on telcos' ineptitude and inadequate investments in their network and have become dominant in the residential broadband market with a nearly 65% market share. However, telcos have recently been upgrading 5 million-plus households annually to fiber and this is only expected to accelerate. Additionally, in the short-medium term, with excess wireless capacity, T-Mobile and Verizon will continue to push hard with their FWA offering. Cable companies will use pricing, long-term contracts and the mobile bundle to contain churn and yet, the superior fiber product and superior execution by T-Mobile with FWA will have them playing defense. Again, advantage telcos! 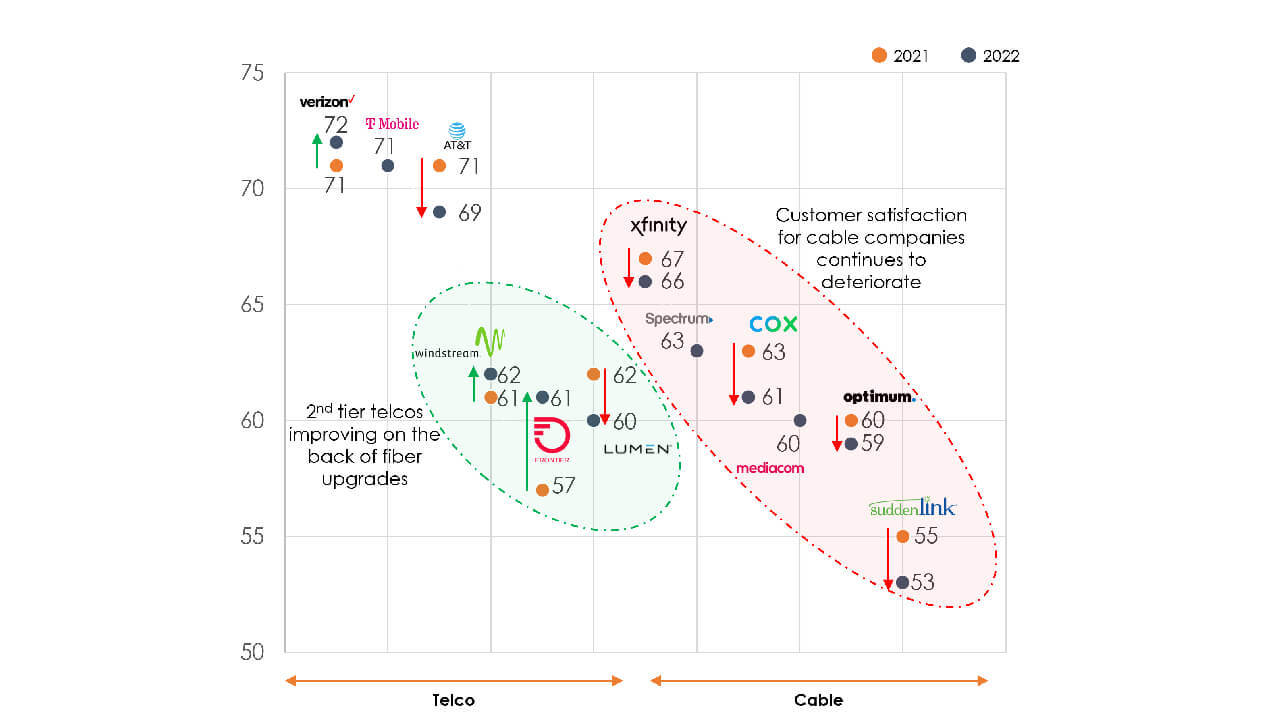 Customer: Cable providers have historically had the lowest NPS scores across industries. In over 20 years in the industry, it is rare that we come across someone who has not had a terrible experience with their cable provider. Among Internet service providers, cable companies rank behind tier-1 telcos and more recently have been moving in the wrong direction. Unless cable companies move away from their promotional pricing strategy and focus sharply on customer experience, we see this continuing to be a handicap. Advantage telcos!

Technology: A cable company earnings call will have your head spinning with node splitting, high-split, DOCSIS 4.0 etc., being thrown around when it comes to their roadmap and how they hope to compete with fiber. The fact that major cable companies have dramatically different roadmaps, with fiber figuring in some way, shape or form, proves that HFC has met its match and that cable companies will be playing catch-up from here on out. Game, set, match Telcos!

3GPP Release 17: Completing the First Phase of 5G Evolution
Setting off the 5G Advanced Evolution
Enabling the metaverse with 5G
How 5G is enabling resilient communication
Why and what you need to know about 6G in 2023
More Blogs from Guest Perspectives
Don't worry about the government?

Former Heavy Reading analyst Patrick Donegan looks at the year ahead in telecom security and how regulatory moves can push telcos to safety.

The future of the Internet is underwater

As the volume of Internet traffic skyrockets, some of the world's largest businesses and tech companies are investing in new subsea cable routes to meet the demand for more bandwidth and faster connectivity.

Why fiber-to-the-home needs a larger telescope

To engineer and deploy a fiber network that supports long-term economic growth for an area, it's imperative to look beyond only serving FTTH to maximize the investment and ensure communities are well positioned for the future demands of technology.

Four ways the telco industry will change in 2023

AWS VP Adolfo Hernandez spotlights data, sustainability, partnerships and telco transformation as major themes to watch in the year ahead.