Nokia shrugs off components crunch with sharp rise in profit

Nokia CEO Pekka Lundmark could afford a cautious smile on his early-morning Teams call with reporters. Third-quarter profitability is up at the Finnish equipment vendor thanks to a mixture of cost-cutting and investment in research and development  the basis of the turnaround strategy Lundmark announced when he replaced Rajeev Suri last year. His main worry is the shortage of components Nokia needs for its products.

Sales growth of 2% year-on-year, to nearly 5.4 billion (US$6.3 billion), was apparently constrained by the supply-chain problems that have hit the entire industry. "We would have been able to grow faster had there been more components," he said. "Our ability to grow is not limited by demand or production capacity."

Investors were able to overlook the crunch, largely because of the margin gains. Nokia's operating profit rose 43%, to 502 million ($582 million), and its net income soared 78%, to 351 million ($407 million). Trading in Helsinki pushed Nokia's share price up nearly 6% at one point this morning. 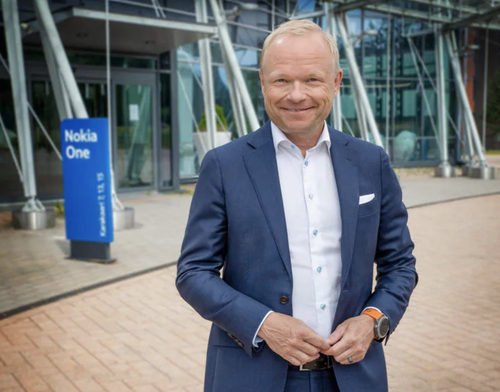 Improvements across numerous divisions followed a renewed commitment to R&D, spending on which had been allowed to fall under Suri. Overall investments in that area rose 12% for the quarter, to about 1.04 billion ($1.21 billion). With a more competitive line-up of products, the company's gross margin rose 3.6 percentage points, to 40.7%.

Lundmark is still guiding for a full-year operating margin of between 10% and 12%. He even expects to be closer to the upper end of this range after Nokia's strong performance so far this year. The concern is that a components crunch affects growth next year. "We believe it is likely it will get worse before it gets better," he said. "We expect it will limit margin expansion potential next year. This is an overhanging shadow for 2022."

Turnaround efforts have largely focused on a mobile networks business that accounts for about 43% of sales. It had lost its way under Suri after Intel, its only supplier for a certain class of 5G chip, ran into production problems. Nokia fell back on alternatives supplied by Xilinx but subsequently blamed these programmable chips for higher costs that chewed into profitability and hurt its ability to compete.

Using chip suppliers including Broadcom, Intel and Marvell, Nokia has been phasing out those Xilinx chips, a process it expects to complete by the end of next year. It recently unveiled a more competitive set of 5G products that has impressed industry analysts.

Gross margins have clearly improved in mobile, rising by 1.8 percentage points, to 37.7%, for the recent quarter. But sales dropped 5%, to around 2.3 billion ($2.7 billion), and by the same percentage on a constant-currency basis. One issue has been the earlier loss of a major 5G contract with Verizon to South Korea's Samsung. Another is what Nokia described as "continued declines in legacy radio access products, as well as services."

Even so, the perception in this 5G market is still that Nokia trails Swedish rival Ericsson, which boasted a 6% sales increase (on a constant-currency basis) for the third quarter outside China, where it has lost some market share. Discounting the Verizon setback, and Nokia's own loss of market share in China last year, analysts will be hoping to see further proof of a Nokia 5G recovery in subsequent quarters.

If there was another disappointment, it probably came at Nokia's youngish enterprise business. Sales at this unit grew nearly a fifth in the year-earlier quarter. But they dropped 4%, to 368 million ($427 million), for the one that recently ended, despite "strong momentum in private wireless." This could partly explain why sales at Nokia's optical networks unit were down 12%, to 412 million ($478 million).

"Enterprise was weak," Lundmark told Light Reading. "There was some lumpiness in deliveries in the quarter when it comes to webscale and infrastructure projects, but private wireless is growing steadily double digit and overall for enterprise we are building a good backlog for 2022."

There are currently two engines of growth. The first is Nokia's new-look cloud and network services business, which combines software with other activities. Revenues here grew 13%, to 748 million ($867 million), thanks largely to a surge of interest in the 5G core, the control center of the network. Given the array of new entrants targeting this sector, that is an encouraging sign for Nokia. This division also swung to an operating profit of 23 million ($27 million), from a loss of 148 million ($172 million) a year earlier. A "project-related loss provision" appears to have struck third-quarter results in 2020.

The other motor is fixed access. Previous underinvestment in fiber, a backlash against Chinese vendors and pandemic-fueled demand for broadband services have provided a perfect combination for Nokia, which reported a 29% increase in fixed network sales, to 588 million ($682 million).

"We are seeing some operators are wanting to change suppliers," said Lundmark, when asked if there were opportunities to replace Huawei in markets that have soured on the Chinese.

While fixed access accounts for a relatively small share of Nokia's revenues, there is clearly some optimism that sales growth will continue at a high rate. "When you look at large European countries, how many homes are passed by fiber and how many there are still to pass, we have only scratched the surface of this market," said Lundmark.