JMA gets ready to offer 'Made in the USA' 5G equipment

Syracuse, New York-based JMA Wireless is getting ready to take the wraps off a massive new manufacturing center in its hometown that will allow the company to build its 5G equipment domestically.

In doing so, JMA joins Ericsson, COMSovereign and others in looking to manufacture 5G equipment in the United States.

The actions dovetail with growing noise around the need for domestic 5G suppliers. And JMA's efforts could well be buoyed by a shift toward open RAN technology that may open doors to smaller vendors like JMA.

Further, JMA's manufacturing center is opening just as demand for mobile network equipment appears to be growing among enterprises, government agencies and others  spurred by the release of new spectrum bands like 3.5GHz CBRS  that are not traditional, commercial mobile network operators. For example, the US Department of Defense (DoD) is spending hundreds of millions of dollars on 5G equipment tests with vendors like JMA. Those tests coincide with a slow pivot to a communications system covering the entire US military that may well be based on the 5G standard.

"It's been almost two decades since the US had a wireless champion in terms of network infrastructure," Bill Plummer, JMA's SVP of communications and external affairs, told Light Reading. Plummer said the United States has a long history of developing critical telecommunications technology  stretching back to Alexander Graham Bell and Bell Labs  but that the country has fallen behind the likes of China's Huawei and Sweden's Ericsson in terms of supplying equipment for modern cellular networks.

It's worth noting that Plummer has deep experience with the topic. He represented Huawei for years in Washington as the company's VP of external affairs until joining JMA earlier this year. Plummer's career trajectory coincides with US policymakers' hardening stance against Chinese vendors like Huawei over fears that such companies would support Chinese espionage.

Now, though, Plummer said JMA has a chance to take advantage of "a perfect storm of competitive opportunity for American players to get back into this game." He cited trends like private wireless networks and open RAN as opening opportunities for companies like JMA.

But security is a primary reason JMA initially announced in 2019 its plans to build a 5G manufacturing center in the US.

A matter of trust

"You look at the incumbents, they have a long history, 20 years of history, of building up global supply chains that feature heavy reliance on inputs from untrusted markets. It is what it is. And a lot of these foreign-owned newcomers that are making a splash  or trying to make a splash  here in the US are relying on similar supply chains," he said. "We're consciously not doing that. We're consciously building security assurance into our operations, into our supply chains. We're not bolting it on after the fact."

To be clear, JMA already operates manufacturing facilities in the US, but the company's new facility will focus specifically on the its growing lineup of antennas, transmitters and millimeter wave products for open RAN, 5G and private wireless networks. It will also feature a 5G demonstration area.

The facility  opening on the site of a bankrupt industrial laundry on Syracuse's South Side  spans 97,000 square feet and will support 200 new jobs. JMA has invested $52 million in the facility so far, and that figure could grow to $100 million in the next three years as the company embarks on expansion plans. 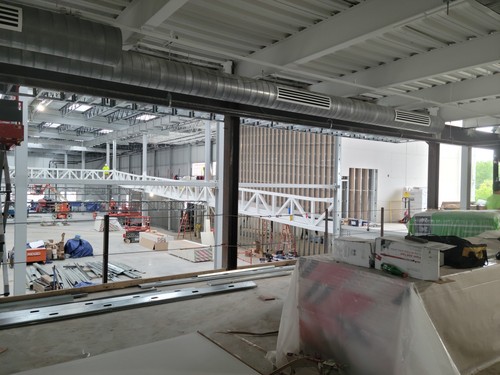 Plummer said the facility will be open by December 2021, which represents a bit of a delay from the company's initial hopes of opening the facility near the end of 2020 or early 2021.