France's government has decided to replenish some of its money pots, cleaned out by lavish expenditure in the lockdown, with a raid on the cash reserves of the country's mobile operators. As the 'rona continued its surge into French cities and towns, following its short summer vacation, authorities kicked off a 5G auction. By day two, the minimum price for the spectrum on offer had already climbed to around 2.4 billion ($2.8 billion).

On a like-for-like basis, this already makes French spectrum in the 3.4-3.8GHz range pricier than equivalent frequencies in Austria, Spain, Ireland, Finland and Latvia, according to Light Reading's spectrum database. France is still far behind Italy, a mid-band outlier that fleeced operators for more than 4.3 billion ($5 billion) two years ago. It also lags Germany, which made 4.9 billion ($5.9 billion) from mid-band licensing in June last year. But it is already catching the UK, where operators spent £1.5 billion ($1.8 billion) on 3.4GHz airwaves in 2018. 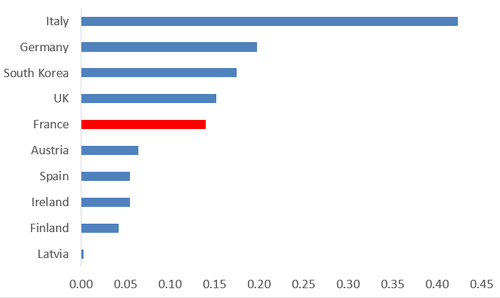 Comparisons are made on the basis of the fee per MHz per head of population, a metric commonly used to value spectrum. Italy's operators spent a lofty $0.42 per MHz pop, as it is abbreviated, while Germany's paid $0.20. When the UK's first mid-band auction wrapped up in April 2018, MHz per pop worked out at $0.15. In France, it is already $0.14.

Before the global pandemic, while most other major European countries were selling frequency licenses, France looked in no hurry to free up the airwaves needed for the latest generation of mobile technology. Unsurprisingly, then, it fares badly in rankings. A recent Omdia comparison of 22 countries by their 5G progress puts France 18th, behind Switzerland, the UK, Finland, Germany, Italy and Spain. Only Singapore, India, Brazil and Indonesia do worse. 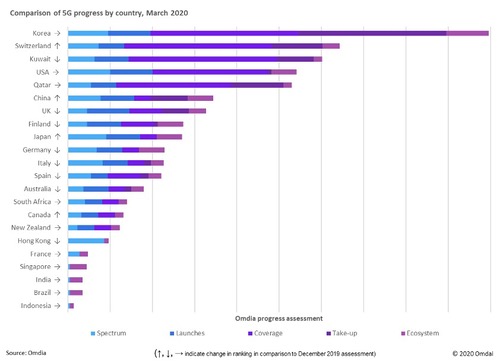 French flap
France appears to have had some kind of panic as 5G crept up the mainstream news agenda. Perhaps improbably, it is now a major front in the geopolitical contest between China and the US. Huawei spent years telling everyone that 5G would reinvigorate economies, power artificial intelligence and revolutionize industry. That backfired when some US politicians bought the story and decided 5G was too important for a Chinese vendor to be allowed anywhere near it. Other countries seem terrified that falling behind could turn them into some kind of digital wasteland.

But French operators are not in the same rush. In late May, Bouygues Telecom asked the regulator to postpone a frequency sale to early 2021 because of the virus. "We need to push back the auction date simply because the economic world today is not the same as it was in early March, when the terms of the auction were set," said Martin Bouygues, the CEO of the Bouygues group, according to news reports. Weeks later, his business reported a 15% year-on-year fall in sales for the first half, to 14.8 billion ($17.3 billion), and racked up a net loss of 244 million ($286 million).

Even so, telecom has fared much better than most other sectors this year. While Europe's fondness for lucrative spectrum auctions obviously remains unpopular with the region's service providers, governments may not have much sympathy. Nor will many struggling citizens who already think big business dodges taxes and contributes too little (however right or wrong that assumption may be).

In an unusual twist, a group of employees at Orange, the French incumbent, has been campaigning against any 5G investments whatsoever. "Je Suis Si Vert" (I'm So Green), as it is called, thinks 5G will be a loss-making environmental disaster. Profits would accrue to smartphone makers, app platforms and the government, it has argued. Many in the telecom industry would agree.