Like any private sector companies, Ericsson, Huawei and Nokia, the ruling triumvirate of network equipment makers, are traditionally measured on their financial performance. But these days they prefer to square up to one another by flaunting the 5G deals they have won. Naturally, portfolio size matters. Naming customers also earns kudos, or so Ericsson and Nokia believe.

Huawei was the latest to strut its 5G stuff. At what was supposed to be a pre-Mobile World Congress (MWC) event, but turned out to be the first of two no-MWC events following the giant trade show's shock cancellation, the Chinese company last week in London boasted of 91 5G deals, including 47 in Europe, where some politicians fear it is a conduit for Chinese spying. This number puts it ahead of Ericsson, which claims 81 agreements, has named 35 customers and points out that 25 networks are "live." Nokia brings up the rear, with 67 deals, 40 named customers and 19 live networks.

Ding rings up the 5G numbers 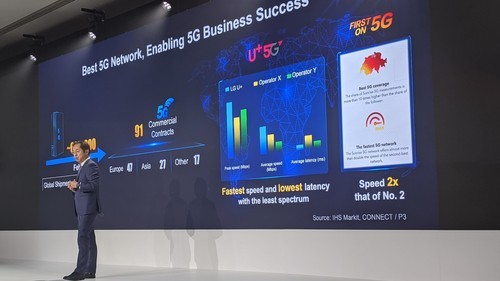 These figures, when taken at face value, suggest the Chinese vendor is winning the 5G technology race. Both supporters and critics could latch onto them as evidence of the company's supposed "18-month lead" over competitors. In fact, they show nothing of the sort. At best, they merely confirm that a US-led campaign against Huawei has so far had minimal impact on its market position. At worst, they serve to obfuscate what really matters.

There are two glaring problems with the deal metrics. First, just about every service provider in the world will eventually upgrade to 5G if it is planning any kind of future. 5G is a must-have, not a nice-to-have, and operators currently have few supply alternatives to Ericsson, Huawei and Nokia. Second, when it comes to mobile infrastructure, market share positions are fairly entrenched due to vendor incompatibility. If an operator wants to change suppliers with the introduction of 5G, it must use the new vendor's 4G equipment as well, replacing the legacy provider, to avoid any interoperability problems. The costliness of this overhaul partly explains why some European operators are lobbying fiercely against a Huawei ban.

Switching to a new vendor should, in theory, become easier with a newer "standalone" variant of 5G technology, less dependent on the 4G system than today's "non-standalone" networks. Yet even here there are barriers to change, according to Fredrik Jejdling, the head of networks for Ericsson. "There are too many benefits of using the same vendor rather than spreading it out among multiple baseband and radio vendors in one region," he told Light Reading during a phone call last month. "I think that proposition is far stronger than building an overlay."

In other words, only in unusual circumstances would an operator build its 5G network with someone other than its 4G supplier. This is not to say "swaps" never happen. Huawei gained market share in Europe during the 4G era by offering to replace 2G and 3G networks on generous terms. In today's 5G market, Ericsson has recently dislodged Huawei in one or two cases through the same kind of 4G largesse. But these changes are now rare. Ericsson's share of the worldwide market for radio access networks (RANs) rose just 1.2% between 2016 and 2018, according to Dell'Oro, a market research firm. Nokia, despite its well-publicized 5G product difficulties, has seen hardly any of its 4G customers defect to 5G rivals.

The headline 5G deal numbers, then, merely reflect the companies' respective 4G positions, with Huawei out in front, Ericsson a close second and Nokia the number three. Indeed, there is a striking correlation between 4G market share data for Europe and the percentage of 5G contracts that vendors claim. Last year, Vodafone CEO Nick Read estimated that Huawei had 28% of Europe's mobile infrastructure market, with Ericsson on 27% and Nokia on 23%. Out of the 239 5G deals the three vendors boast internationally, Huawei has 38%, Ericsson 34% and Nokia 28%. 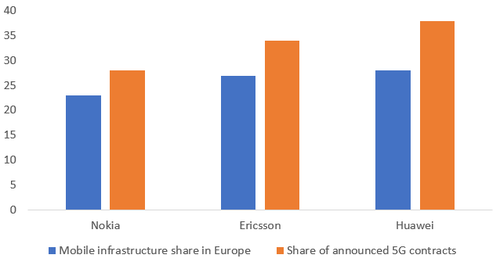 What they should be saying
A far more useful measure would be a regular quarterly update on market share. Under pressure to scotch concern about its 5G competitiveness, Nokia included one in its last earnings report and promised updates in subsequent financials. In the fourth quarter of 2019, it claimed 27% of the 4G and 5G RAN market outside China, where its reluctance to be as transparent suggests it is struggling. While a number that includes the world's biggest mobile infrastructure market would obviously be even more helpful, neither Ericsson nor Huawei provides anything close. Nokia also indicated that it expects to maintain its 27% share outside China this year.

A market share statistic is not the only new metric recently championed by the Finnish vendor. Henceforth, it has promised to show details of what it calls the "weighted 5G win rate." The idea is to demonstrate its success at converting 4G customers to 5G and securing entirely new 5G business. A figure of 100% would imply contract numbers are unchanged: Either no customers have defected, or any losses have been offset by new deals. At the end of 2019, Nokia's win rate was more than 100% outside China and in the mid-90% range including China.

Such efforts will increase the pressure on Ericsson and Huawei to be more transparent. One of the main criticisms about Huawei is that it declines to name many customers, provoking skepticism about its boasts. Its excuse is that it needs a customer's permission to reveal this information. And while Ericsson and Nokia are in the same boat, the controversy that surrounds Chinese suppliers could make operators balk at Huawei-related publicity.

To critics of the Nordic vendors, their main shortcoming is a refusal to share data on basestation or antenna shipments. Last week, Huawei claimed shipments of more than 600,000 active antenna units, a figure that is hard to assess in the absence of much context. Nevertheless, the suspicion is that Ericsson and Nokia have sold far fewer units, partly because of Huawei's dominant position in China, whose basestation footprint makes other countries look Lilliputian. In 2019, China's three mobile operators had planned to install more than 130,000 5G basestations by the end of the year, and the number could rocket in 2020: China Mobile alone has more than 2.7 million 4G basestations nationwide.

What, no 5G growth?
Yet none of this data says anything about sales growth, and the numbers so far are hardly dazzling. Nokia has become increasingly downbeat. Nearly two years ago, its forecast was that "5G momentum [would] drive growth in the primary addressable market in 2019 and 2020." Earlier this month, it decided that market would be "flat" this year in constant currency terms, reporting 1% growth in its mobile infrastructure sales for 2019. Ericsson's Jejdling forecasts a compound annual growth rate of just 2% between 2020 and 2022 in the RAN market, even though its own RAN sales were up 6% for 2019 in constant currency terms. Yet to report 2019 figures, Huawei saw its networks business shrink 1.3% in 2018, when overall sales grew 19.5%. Battered by headwinds, it expects 2019 revenues to have risen just 18%.

Moreover, there are signs 5G equipment prices are under pressure as customers also feel a squeeze. Ericsson, in particular, has indicated a willingness to accept less profitable contracts to build market share. It insists the strategy will pay off, but analyst doubts were aired as far back as October 2017, when the aggressive tactics started. Francois Meunier, then an analyst for Morgan Stanley, pointed out during an earnings call with Ericsson CEO Börje Ekholm that an earlier push for market share had ultimately failed. 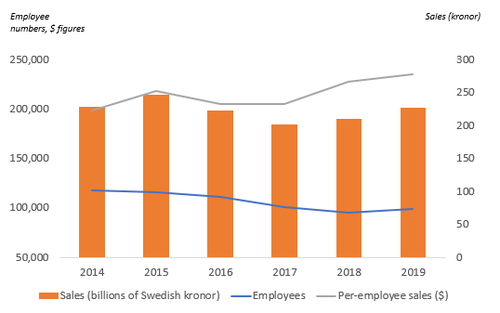 While the Swedish vendor does seem to be improving its market position, it has been forced to hack into costs to make profits look respectable. In the last five years, Ericsson's workforce has shrunk by more than 18,600 employees as it has sold assets and "digitized" operations. Those measures have boosted per-employee revenues from less than $200,000 when Ekholm took charge in 2017 to more than $235,000 last year (using current exchange rates). A new efficiency drive is now underway as Ericsson automates factories and invests in artificial intelligence.

Despite all the previous hype, 2020 seems unlikely to be a glorious year for the telecom industry. Forecasts had been lowered even before the outbreak of the new coronavirus, COVID-19, which prompted the cancellation of MWC and now threatens global supply chains. Operators are looking more seriously at disruptive, low-cost network technologies as an alternative to the traditional manufacturers. 5G remains a fuel injection for the smartphone, not a new type of vehicle. In the absence of anything more effective, expect vendors to keep touting those deal wins.