The Dutch love to do it differently.

While their more prudish neighbors in northern Europe still frown on drugs and prostitution, Amsterdam is celebrated for its "coffee shops" and red-light district.

The same permissiveness can be seen in telecom.

As several Scandinavian operators apparently decided that Huawei was altogether too risqué, ditching it for local boy Ericsson when they signed 5G deals, Dutch incumbent KPN counterintuitively opted for the Chinese: Huawei is now replacing Ericsson in KPN's radio network. 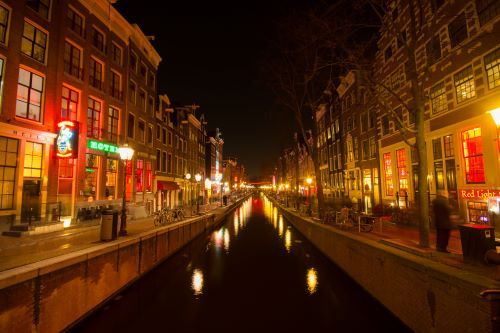 Amsterdam's famous red-light district is near the city center.

More recently, the Dutch have taken their idiosyncratic ways into the world of the spectrum auction.

As coronavirus put the kibosh on 5G auction plans in France, Spain and other countries, the Netherlands decided the telco need for spectrum was just too great.

Bleed 'em dry
Not so great that spectrum would be awarded for a nominal fee, though, as parts of the industry have urged.

Reeling from the impact of the pandemic, the Dutch government was not about to pass up the opportunity to make a quick buck.

The only three bidders were the companies that already operate telecom networks, and yet they still had to shell out 1.23 billion (US$1.42 billion) for airwaves of questionable value.

"The starting prices for the auction were too high," complained T-Mobile.

Now, 1.23 billion split roughly three ways is not going to break the bank, but 400 million ($463 million) does equal more than one third of KPN's capital expenditure and two thirds of its net profit last year, when pre-pandemic life was much happier.

A not-insubstantial cost, whatever the payment schedule, is likely to have some impact in the current malaise, even if KPN had already factored this in.

With its first-quarter profits of 120 million ($139 million) and revenues of 1.3 billion ($1.5 billion), KPN will probably not attract much sympathy.

But it might not be the shareholders who suffer (although dividends have been cut by other European operators). The spectrum bill might not even constrain the 5G rollout, as equipment vendors like Ericsson insist.

In the year to March, staff numbers fell more than 1,000, representing about 9% of total jobs. Additional licensing fees could mean extra misery for workers.

A '5G' auction?
Worse, the spectrum auction that has just wrapped up was not even the main event.

When it comes to 5G, European operators are chiefly interested in the 3.5GHz band, which promises a nice balance between coverage and capacity for the high-speed technology and a selection of compatible network equipment.

In do-it-differently Holland, these are still used by intelligence agencies and will not be sold to operators until 2022.

In their absence, the Dutch government has flogged some 700MHz and 1400MHz spectrum and relicensed the 2100MHz airwaves that operators originally bought for their 3G services.

Because Vodafone plans to kill its 3G network this year, it could feasibly use the 2100MHz spectrum to support 5G services. But KPN is not aiming for a 3G shutdown until 2022, and T-Mobile seems more interested in switching off 2G, which uses different spectrum entirely.

As for the 1400MHz band, that is a real outlier in 5G and unlikely to be a priority for the makers of equipment. It is neither low enough to provide excellent coverage nor high enough to support more advanced 5G services.

The allocations are also too minuscule to be of much use. KPN and Vodafone each secured a 15MHz license, while T-Mobile was left with just 10MHz.

That leaves the 700MHz band, likely to be essential in future for wide-area 5G coverage.

The trouble here is that low-band frequencies are good only as the long-distance runner of the spectrum family, able to carry signals over marathon stretches but missing the muscle needed for superfast services. Until higher-band airwaves are freed up, customers are unlikely to see much improvement on 4G.

Price per MHz pop in Dutch multi-band and 3.5GHz auctions ($) 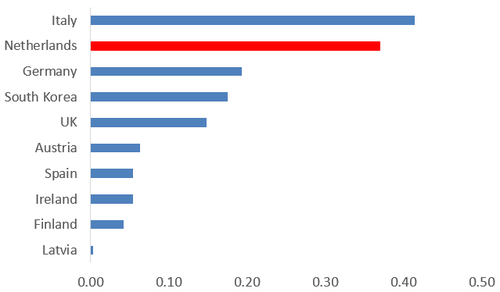 For this jumble of licenses, Dutch operators ended up paying about $0.37 per MHz per head of population (a common way of valuing spectrum), about nine times the amount that Finnish operators spent on 3.5GHz spectrum in late 2018.

Going Chinese
Spectrum is far from the only 5G concern, though.

Data published by Strand Consult, an advisory group, shows that T-Mobile is already entirely dependent on Huawei for its radio access network (RAN), while Vodafone relies on the Chinese vendor for about half its RAN equipment. With KPN switching from Ericsson, more than 80% of the country's radio infrastructure will soon use controversial Chinese equipment.

If European authorities eventually ban Huawei, as seems increasingly likely, Dutch service providers will have a major swap-out on their hands.

5G enthusiasts would be advised to move elsewhere.