Deutsche Telekom is in a 5G mess if Huawei is banned

The latest news item about Germany's Deutsche Telekom and Sweden's Ericsson is a classic example of one that should fail the "opposites" test.

If the opposite development would have made a more compelling headline, the story is probably a dud.

In this case, Deutsche Telekom and Ericsson are to build a 5G network in Germany.

At first glance, it demands the stifling of a yawn. Operators nearly always use their existing radio access network (RAN) suppliers when upgrading to 5G, especially if the relationship is fairly new. And Ericsson entered Deutsche Telekom's German RAN as recently as 2017.

Now if the story were "Deutsche Telekom will not use Ericsson for 5G"  that would have made you choke on your sauerkraut.

But then you start to wonder about the timing. This is an operator, remember, that was boasting last month about its 12,000 5G antennas already in "live operation." By mid-July, half the German population could subscribe to Deutsche Telekom's 5G service  if they didn't mind the naff selection of handsets.

So if Ericsson is only just getting started, then where did all that 5G technology come from? And just what has the Swedish player been up to since 2017?

The BASE-jumping approach to risk management
It's certainly no secret that Deutsche Telekom has relied heavily on China's Huawei for its mobile network in Germany.

CEO Timotheus Höttges must have been squirming in recent weeks as the German press exposed the full details of that Sino-Teutonic relationship, all while the US-led campaign against Huawei closed in on Berlin.

Deutsche Telekom even issued a statement insisting it is not as Huawei-dependent as it used to be. It probably hoped Ericsson's announcement would back up that claim.

It seems to do the opposite. If Ericsson is yet to support any live 5G services  and its press release is emphatic in its use of the future tense  then 100% of the 5G network serving German customers is provided by Huawei, Deutsche Telekom's only other RAN vendor.

As risk management goes, this makes BASE jumping look conservative. 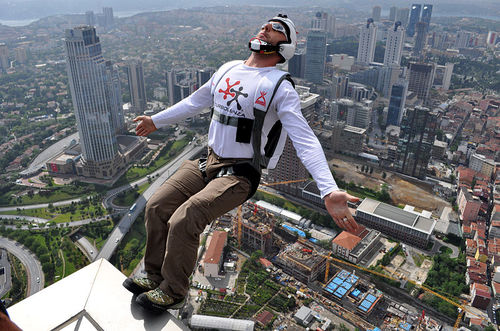 German Chancellor Angela Merkel is under growing political pressure to follow the UK's example and banish Huawei from the 5G market. If Germany didn't flog so many cars to China, she would probably have caved already.

That ban, should it come, will force Deutsche Telekom to rip out the thousands of antennas it has bought from Huawei and replace them with another vendor's kit.

In a leaked internal document, Deutsche Telekom is said to have described this scenario as "Armageddon" and warned of a 3 billion ($3.5 billion) bill to replace Huawei.

Filling the hole
Unwelcome as it would be, it could be managed by a company that last year made 80.5 billion ($93.3 billion) in sales and 3.9 billion ($4.5 billion) in net profit.

The much bigger problem would be finding someone to fill the Huawei hole.

It's probably not just the 5G equipment that would have to go. To realize the full potential of 5G, operators say they must build it on top of 4G, using the same vendor for both technologies. Removing a 5G vendor, then, means taking out its 4G kit as well.

That's a lot of equipment. Strand Consult, an advisory group, reckons Huawei accounts for about 65% of Deutsche Telekom's entire RAN, with Ericsson providing the remainder. Unless it wants to leave some 5G "not spots," Deutsche Telekom would have to replace all the Huawei gear.

There are now ways to avoid this and build a 5G "overlay" with an entirely different supplier. But few operators have shown much interest. A 5G overlay would require more spectrum than most European companies have at their disposal, according to Howard Watson, the chief technology officer of the UK's BT.

Deutsche Telekom might also need to find a new 2G and 3G supplier if, as seems likely, it has used "single RAN" technology, supporting 2G, 3G and 4G all on the same Huawei platform.

Few good vendors
This would probably rule out Samsung as a Huawei replacement. Keen to present itself as the main non-Nordic alternative, the South Korean vendor lacks 2G and 3G products.

That leaves Ericsson and Nokia as the only mainstream options, and neither is ideal.

Using Ericsson would make it the only RAN supplier in Germany. If the Swedish firm hit problems, Deutsche Telekom would have no quick fallback.

Nokia preceded Ericsson as Deutsche Telekom's second RAN supplier, but it was given the Teutonic boot in 2017, when the operator decided Ericsson was much better.

Since then, Ericsson technicians have been running around Germany swapping Nokia's boxes for their own.

If the Finnish vendor wasn't good enough for 35% of Deutsche Telekom's network, why would it be a safe bet as the RAN supremo  especially as the last two years have brought news of 5G product difficulties at Nokia?

It's little wonder Deutsche Telekom is so keen on open RAN. This emerging technology promises to let operators mix different suppliers at the same site, and it might create openings for smaller vendors.

Unfortunately, it is immature and unproven. It would take a very brave CEO of a large existing operator to approve an open RAN deal.

Höttges will just have to pray that his government does not take its lead from the UK.