"I expect we're going to take our execution to the next level" in 2022, CEO John Stankey said Wednesday during the company's quarterly earnings conference call.

And in 5G, that means AT&T will soon embark on a program that involves upgrading tens of thousands of its cell towers with equipment that can broadcast signals in both C-band spectrum and in 3.45GHz-3.55GHz spectrum.

"Our network is only going to get better as we effectively deploy our new spectrum holdings," Stankey explained.

Specifically, Stankey said that AT&T's capital expenses (capex) will rise starting in the spring when the operator's vendors begin supplying radios capable of supporting AT&T's full midband spectrum holdings. The operator spent a total of around $27 billion in the FCC's C-band spectrum auction last year, and a total of around $9 billion in the FCC's recently completed auction of 3.45GHz-3.55GHz spectrum (Auction 110) this year. Now, according to Stankey, the operator plans to begin a network upgrade program that involves deploying both those spectrum bands at one time.

Stankey on Wednesday estimated the upgrade effort would cost roughly $8 billion  spending that would likely cover the purchase of radios as well as the physical expense of installing them atop cell towers. That's at the high end of the estimate the company provided last year, prior to Auction 110.

A 'one touch' build

"We are in a unique position to be able to deploy both 40MHz from our A Block of the C-band and our 40MHz from the Auction 110," Stankey said. The A Block of the C-band is that portion of the spectrum that can be deployed now. The remainder  the B and C Blocks  cannot be deployed until 2023 because it's currently being used for satellite operations.

"To do that together  at one time with one tower climb  that allows us to start really going what I would call 'good guns' on this," Stankey said. As a result, he said AT&T expects to cover 200 million people with a total of 80MHz of midband spectrum by the end of next year.

AT&T has experience with such a program. The company's recent "one touch" network upgrade program involved installing 700MHz, AWS and WCS spectrum for both 4G and 5G.

According to the financial analysts at Raymond James, AT&T commands around 70,000 total cell towers and, overall, owns slightly more spectrum than Verizon below 6GHz.

AT&T's new 5G buildout program represents an acceleration of the operator's previous plans. Following the close of the C-band auction early last year, the company said it would spend $6 billion to $8 billion between 2022 and 2024 to cover 100 million people with midband 5G services in "early" 2023. Now, with its new holdings from Auction 110 of 3.45GHz-3.55GHz spectrum, AT&T is hoping to expand and accelerate that effort. AT&T officials said they would provide more details on the buildout effort during a March investor event.

However, AT&T currently trails its rivals in midband 5G. T-Mobile, for example, already covers around 200 million people with around 100MHz of its 2.5GHz midband 5G network. And Verizon recently launched its midband C-band network across 95 million people with 60MHz of spectrum. Verizon has said it plans to cover up to 175 million Americans with C-band 5G by the end of 2023.

Further, AT&T is working from a delayed start. Company officials recently said AT&T would not meet its goal of covering 70 million to 75 million people with C-band connections by the end of 2022, blaming supply chain issues. AT&T this month launched C-band services across "limited parts" of just eight US cities.

During the company's earnings call Wednesday, AT&T officials explained in part how the operator expects to reach its new 5G targets. They said AT&T would raise its capital investments to a total of $24 billion in 2022, up from around $21.6 billion in 2021 (figures that include vendor financing). AT&T's rivals, including Verizon and T-Mobile, have pledged similar increases in 2022.

That's noteworthy considering, roughly a year ago, AT&T signaled that it would shift away from vendor financing.

"We have found that more and more of our vendors are willing to provide us with very attractive terms and we're taking advantage of those," AT&T CFO Pascal Desroches explained Wednesday during the company's conference call, without providing details. Ericsson, Samsung and Nokia are AT&T's top 5G equipment vendors.

Other takeaways from AT&T's fourth quarter earnings report include: 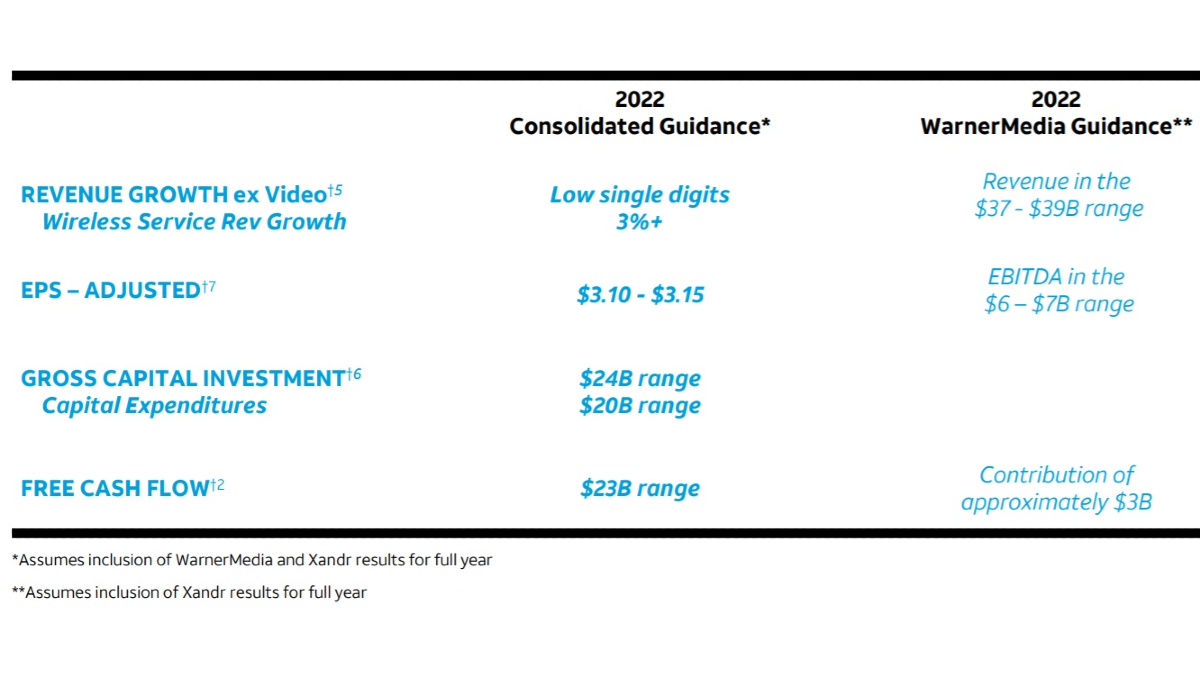 AT&T outlined its 2022 financial expectations in conjunction with the release of its fourth-quarter earnings results.
Click here for a larger version of this image.
(Source: AT&T)