After 'reset' year, Nokia is under pressure to show 5G growth

Resets, even great resets, have become trendy amid an economically disruptive, tech-propelling pandemic. For Pekka Lundmark, resetting Nokia  the Finnish equipment maker he has led since August 2020  would have been a priority regardless of that upheaval. The company had lost competitiveness and watched its profitability collapse before he joined. After what Lundmark himself calls a "year of reset," Nokia is in markedly better health.

It is apparent mainly in the profit margin recovery that has occurred under Nokia's new boss. On a like-for-like basis, the company's operating margin was up from just 9.5% in 2020 to around 12.5% last year. That is coming partly at the expense of employees. By the time restructuring is finished, headcount will have dropped from 90,000 to between 80,000 and 85,000, Lundmark has said. 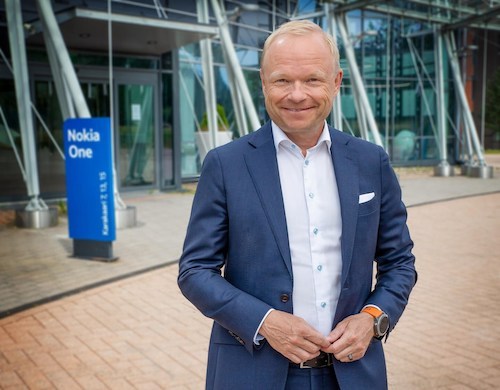 Nokia is moving into the 'accelerate' phase of its strategy, says CEO Pekka Lundmark.
(Source: Nokia)

Net profit last year soared 47% after that improvement, to more than 2.1 billion (US$2.4 billion), and there is to be a resumption of dividend payments canceled when financial troubles were mounting. "We have said all the time that of course our goal is to restart shareholder distribution when the time is right and you just need to look at the numbers  the free cash flow of 2.4 billion [$2.7 billion]," Lundmark told reporters this morning, after his board proposed 0.08 per share for 2021.

Any concerns would have to be over the still-sluggish sales performance, something Nokia's boss aims to change this year. Full-year revenues grew 2%, to roughly 22.2 billion ($25.1 billion), although the increase was 3% on a constant-currency basis. While that was not much worse than the 4% recorded by Ericsson, Nokia's Swedish rival, sales dropped 5% on a constant-currency basis for Nokia's final quarter. Investors were unimpressed by the update, sending Nokia's share price down nearly 5% around noon in Helsinki, although it is still much higher than it was this time last year.

What is going on? Nokia's breakdown of numbers shows the long-suffering mobile division  accounting for 44% of total sales  has continued to struggle. Revenues there dropped 7%, to about 9.7 billion ($11 billion), and by 13% for the final quarter. The main reason dates back several years, to when product difficulties upset Nokia's 5G roadmap and triggered a loss of share in important markets. In the US, a huge 5G deal with Verizon  announced in September 2020  went to South Korea's Samsung instead.

Lundmark is sanguine. A fourth-quarter decline in mobile sales and gross margin was expected due to lower sales in North America, he told reporters. He is confident that earlier product difficulties are now behind the company, and he can point to a higher gross margin for the full year as evidence of its more competitive portfolio. "Mobile closed the gap with competition in 5G," he said.

But he will need to show further proof this year in the form of a mobile sales recovery. Lundmark is certainly aiming high for total revenues. Describing 2022 as the start of the "accelerate" phase of Nokia's strategy, he is targeting an extra 1 billion ($1.1 billion) in company sales at the midpoint of his guidance, implying a 5% increase. Network infrastructure, the large fixed-line, IP and optical division, is already on a sales roll, and other Nokia units (cloud and network services plus the Nokia Technologies licensing business) are relatively small. That puts the attention and pressure on mobile.

"Our goal in our business, and very much in mobile and with market share stabilizing, is to grow faster than the market," said Lundmark earlier. On the upside, previous setbacks could make 2021 something of a low point for Nokia. The downside is that 2021 could turn out to be the peak year for spending on radio access network (RAN) products  at least, that is, until the middle of the decade. Omdia, a sister company to Light Reading, reckons market sales rose 7% last year and will drop 3% in 2022. It forecasts annual declines until 2025.

Growing faster than the market could also mean proving it has the edge over competitors and has not merely caught up with them. Nokia unveiled an impressive-looking set of 5G RAN products last year but could do with a big deal or a few smaller ones at a major rival's expense.

Another concern for shareholders may be the slowdown that has happened at Nokia's enterprise unit. Previously one of the fastest-growing parts of the business, it registered a flat sales performance for 2021, with revenues of nearly 1.6 billion ($1.8 billion). While that missed Lundmark's expectations, order intake was "extremely strong," he told Light Reading, and the private wireless unit continues to record double-digit growth in percentage terms. "There are 14 million campuses that could be targets for private networks," he said. "We are going aggressively after this segment and building a new base."

Providing some comfort and security for the Finnish giant is a network infrastructure unit  built largely from parts acquired with the 15.6 billion ($17.6 billion, at today's exchange rate) takeover of Alcatel-Lucent in 2016  that delivered an extra 938 million ($1.1 billion) in sales last year, compared with 2020. That 14% increase, to nearly 7.7 billion ($9 billion), came as operators poured money into full-fiber networks to cope with a broadband traffic explosion during the pandemic. Cut out the Chinese, as some governments are doing, and Nokia remains the only big supplier.

A smallish risk, perhaps, is that authorities and service providers begin worrying about over-reliance on one firm. Competitors such as America's Adtran are growing stronger and advancing in markets such as Germany and the UK. But the backlash against China's Huawei  while centered on 5G  has brought fixed-line opportunities for Nokia, Lundmark said last year. With little sign the geopolitical winds are about to change, he can probably afford some optimism.