Japan's Rakuten arrived in Barcelona, Spain, like a freight train at last year's MWC trade show, promising to completely upend the industry with a radical new network architecture designed to dramatically cut down expenses. The company  whose primary business is selling household items online  raised a few eyebrows among the veteran wireless networking executives at 2019 MWC with its bold claims.

Today, a year later, there's certainly some dirt under Rakuten's fingernails, hinting at the difficulties it has encountered so far. But in an online presentation by Qualcomm this week intended to replace the company's 2020 MWC press conference that was canceled due to concerns about the spread of COVID-19, Rakuten executives remained decidedly optimistic.

Indeed, they pointed out that Rakuten stands for optimism.

The Rakuten Mobile network is "delivering cost savings that is unimaginable," said Chief Architecture Officer Tareq Amin. "It's no pie in the sky"

That "pie in the sky" comment, echoed at the same event by Rakuten CEO Mickey (Hiroshi) Mikitani, is likely a tacit nod to statements made this month by US Attorney General William Barr. In a recent speech highlighting the threat posed by China and Huawei, Barr said that investments into the kind of open RAN technology Rakuten is deploying "is just pie in the sky. This approach is completely untested, and would take many years to get off the ground, and would not be ready for prime time for a decade, if ever."

Not so, says Rakuten's Mikitani. "Now we are ready to launch our service," he declared.

Mikitani and Amin said Rakuten will launch commercial 4G mobile service in Japan on April 8. Although that's a significant delay from an October 2019 launch date Rakuten executives had touted at last year's MWC, it nonetheless represents clear progress by Rakuten on its promise to launch "the world's first end-to-end fully virtualized cloud-native network." 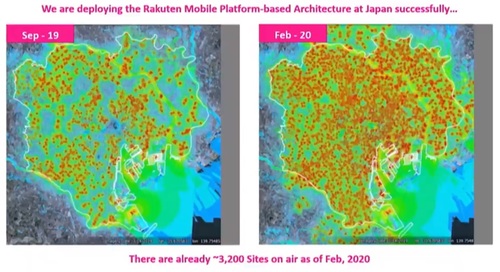 Rakuten said its network across Tokyo has been expanding.
(Source: Rakuten)

Mikitani explained that Rakuten  which is currently Japan's largest MVNO with 2.3 million customers on Docomo's network  had initially planned to build a standard wireless network with equipment from Huawei. But the company opted instead to follow Amin's advice and design a network more like something from Netflix than something from Vodafone.

Those are the kinds of numbers that other players are hoping to emulate. AT&T and Vodafone are among a growing number of operators trending toward the open RAN technologies Rakuten has embraced, while new entrants like Dish Network have made clear their intention to follow Rakuten's footsteps with their own network buildouts. Even US FCC Chairman Ajit Pai is watching Rakuten for indications about where the industry is headed.

It's still early days for Rakuten, of course. Although the company has unveiled a Rakuten-branded phone (the Rakuten Mini) and an RCS calling and messaging app called Rakuten Link, it has not yet disclosed pricing for its commercial service. That information is scheduled to be released March 3. And after that, Rakuten will have to flesh out its wireless network coverage area across Japan while relying on KDDI for roaming outside its footprint, as well as its device lineup (there's still no word on an iPhone for Rakuten, for example).

But based on Rakuten's presentation during Qualcomm's press conference this week, it's clear that the company continues to harbor grand ambitions. Company officials hinted at global mobile plans, without providing details: 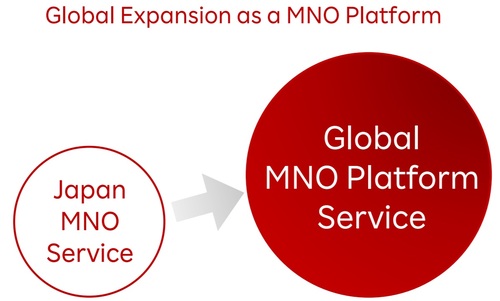 Rakuten officials have been discussing some kind of global mobile platform.
(Source: Rakuten)

Mike Dano 2/26/2020 | 10:37:07 AM
Update Article updated to include Airspan as a supplier.
Reply | Post Message | MESSAGES LIST | START A BOARD
EDUCATIONAL RESOURCES