Wi-Fi 6 products are starting to take hold at the upper end of the retail market. But cable operators and other service providers are also gravitating to the technology with gateways and other products in anticipation of the capacity gains and new, specialized services that Wi-Fi 6 will spawn.

Operators will pay more for those capabilities in the early going, but it'll be worth it, according to Charles Cheevers, chief technology officer of CPE solutions at CommScope, a top supplier of gateways, modems and other connected devices to service providers.

"There is a premium for [Wi-Fi 6], but the benefits outweigh the premium, we think," Cheevers said, holding that the broad expansion and adoption of Wi-Fi 6 will be "operator-led." 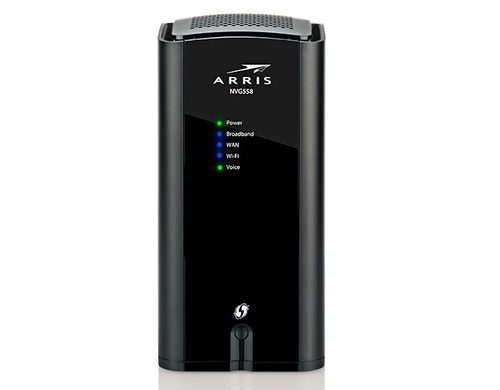 The CommScope/Arris NVG558 is a fixed wireless access gateway with Wi-Fi 6 support for service providers.

One of those benefits is overall performance. Cheevers estimates that Wi-Fi 6 is about 25% more efficient in both throughput and range, even in a "mixed" Wi-Fi environment replete with prior-generation Wi-Fi devices. That, in turn, should create value in the form of improved customer satisfaction and, possibly, fewer truck rolls.

While Wi-Fi 6's impact will partly depend on how the FCC decides to open up spectrum in the 6GHz band (more on that in a moment), the new standard could pave the way for cable ops and other ISPs to build and develop specialized services.

Similar in some ways to 5G's network slicing capabilities, Wi-Fi 6's use of subcarrier "resource units," fostered by the introduction of OFDMA (Orthogonal Frequency Division Multiple Access), will enable operators to dedicate capacity and create pseudo-wire type functions that could be "transformational" to service providers, Cheevers said.

By using Wi-Fi 6 in such "bookended applications," he said operators will be able to reduce congestion between, for example, a Wi-Fi-enabled set-top/video client and the gateway.

Operators "will be able to stream 4K and 8K all they want because the spectrum is now there to do it," Cheevers said.

Jeff Heynen, research director for the broadband access and home networking unit at Dell'Oro Group, noted in this recent blog post that Wi-Fi 6 is rapidly being integrated into next-gen gateways and routers to boost "physical layer throughput for the gigabit age." In addition to those bigger throughputs, he agrees that the next-gen tech is of interest to service providers because it will "ensure that a customer's Wi-Fi network will not impede the delivery of high-bandwidth, latency-sensitive services such as cloud gaming, 8K video and cloud VR services."

6GHz future still unresolved
But, again, some of this will depend on how the FCC moves ahead with plans to release 6GHz spectrum and open the door to Wi-Fi 6E products that can operate in that band.

While there are groups and companies such as the Wi-Fi Alliance and Charter Communications lobbying to have 1.2GHz of spectrum in the 6GHz band allocated for unlicensed use, others, such as Verizon and CTIA, argue that it's needed to fill today's midband gap for licensed 5G services.

It's possible that the FCC will support both and allow for spectrum sharing (as is being done for the 3.5GHz CBRS band) or keep unlicensed and licensed spectrum separated by a guard band. The FCC reportedly will release a plan as early as this week for spectrum sharing in the 6GHz band that would allow Wi-Fi devices to operate alongside incumbent users in the band, such as CenturyLink, AT&T and U.S. Cellular, which use the 6GHz band for wireless backhaul links.

Opening up that band for Wi-Fi would be a big win for cable operators, Cheevers said. "If you make that 6GHz [capacity] available to Wi-Fi you can immediately put all the Wi-Fi 6 devices immediately into that spectrum." That, he added, would provide Wi-Fi 6 a clear, uncongested lane to run on while allowing previous-generation devices to continue operating on legacy 5GHz and 2.4GHz bands.

Wi-Fi 6 use cases for operators
Even as the FCC deliberates the 6GHz issue, Cheevers sees several initial Wi-Fi 6 product types and applications emerging. Among them would be a tri-band access point that can support the 2.5GHz, 5GHz and 6GHz bands or a device that could do 2.5GHz and be capable of switching between 5GHz and 6GHz. The latter example is one that appears to be a preference of some operators, Cheevers said.

Among other possibilities for operators would be wireless replacement of an Ethernet cable that links an access point to a separate embedded multimedia terminal adapter (eMTA) that combines the modem and adapter for VoIP services (some cable operators still use this sort of CPE architecture).

Yet another option is a low-latency Wi-Fi 6 dongle that could connect to a static device, such as a gaming console, and eschew the need for a wired connection. Cheevers said CommScope has witnessed "no perceptible lag" between scheduled Wi-Fi 6E packets and an Ethernet-wired device.