Under that plan, an ad-supported, premium form of Peacock will be offered to subs across Sky's platforms – including Sky Q, NOW and Sky Ticket – for no additional cost. 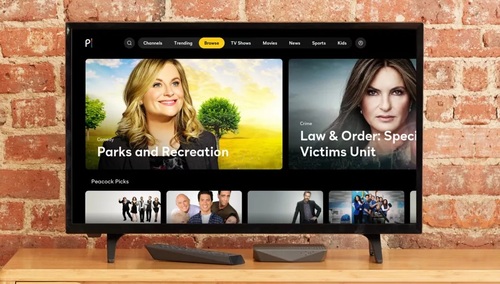 In the wake of last year's US debut, Peacock will jump the pond later this year and be offered for no added cost to roughly 20 million Sky customers in the UK, Ireland, Germany, Italy, Austria and Switzerland.
(Image source: Comcast/NBCU)

That approach follows the initial path Peacock paved in the US last May when the ad-supported premium tier of Peacock was introduced on Comcast's X1 and Flex platforms for no added cost. Peacock followed that up in July 2020 with the US debut of a standalone, direct-to-consumer service featuring three tiers: premium, advertising-free for $9.99 per month, premium ad-supported for $4.99 per month, and a completely free, ad-based version sporting a smaller library.

NBCU did not announce when Peacock might become available on a standalone basis in the European region or shed light on what prices such offerings might fetch.

But the coming launches on Sky's platforms are sure to goose Peacock's numbers in the months to come. Comcast announced today that Peacock has about 54 million "sign-ups" and more than 20 million active accounts, citing the day-and-date release of Boss Baby 2, streaming coverage of the Tokyo Olympic games and the debut of Peacock original series Dr. Death among drivers.

NBCU has yet to break down how many of its sign-ups are for the service's two subscription tiers or its free tier, but has said previously that advertising, rather than subscriptions, is the primary money-maker for Peacock.

Even as Peacock moves ahead with an international distribution strategy, the service has been dogged by suggestions that it will have trouble scaling up and succeeding on its own without combining with another media giant, such as ViacomCBS.

Speaking on Thursday's Q2 earnings call, Comcast CEO and Chairman Brian Roberts reiterated a position that Comcast doesn't need M&A for streaming or any other aspect of its business.

"I really love the company we've got. I believe we have lots more organic growth ahead," he said. "I really think we have all the parts."

"Personally, I don't think we've ever lacked for the capital to do what we need to do to grow our business," added NBCU CEO Jeff Shell. He stressed that Peacock is well-positioned with scale with respect to its platform/technology (launched on the back of Sky's tech platform), its brand and its content slate.

Roberts did leave the door open to potential partnerships that could enhance Comcast's streaming position on a global level. That acknowledgement follows a recent report that executives from Comcast and ViacomCBS have met to discuss ways they could work more closely together on streaming, though no new, formal partnerships between the two appear to be imminent.