Among the many noteworthy items in today's earnings report, Comcast confirmed that it will launch the IP-based Xfinity Instant TV service before the end of the third quarter. The service is a re-brand of the company's previously introduced Stream offering and includes a skinny bundle of television channels, a cloud DVR feature and options for adding on premium content. Instant TV is delivered entirely over a managed IP network and does not require a set-top box.

In talking about Instant TV during the earnings call, Comcast Corp. (Nasdaq: CMCSA, CMCSK) Cable President and CEO Dave Watson made all the right noises about the service receiving positive feedback in trials and expanding Comcast's breadth of offerings. However, he also tempered expectations with a note that Instant TV won't be for everyone. Instead, the new service is meant to appeal to a very select segment of the television-viewing market.

"On Instant TV, this is a program that we've been looking at to go after primarily the [audience] segments like millennials. This is not something that we'll do broad-based in terms of our approach to the market," said Watson. "This is going to be very targeted [and] primarily digital in nature in how we do it." 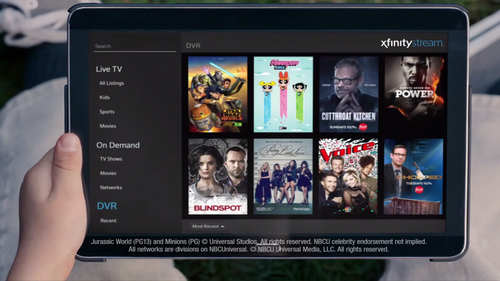 Screenshot of Comcast's Xfinity Stream service, which is being revamped and re-launched as Xfinity Instant TV

Sources have previously reported that pricing for Instant TV will run anywhere between $15 and $40 per month. Watson said today that Comcast is still testing different price points, but it's worth noting that in the $15-to-$40 range, Instant TV could carve into the company's existing video margins. Comcast has to walk a fine line between retaining customers that might otherwise gravitate to new online options and preserving the more lucrative video business anchored by its X1 video service. (See The Skinny on Comcast's Skinny Bundle.)

Regarding customer retention, Comcast wasn't able to pull off another gain in video subscribers during the historically weak period of the second quarter. It reported a loss of 45,000 residential video subs, along with a loss of 50,000 residential voice subs and a gain of 140,000 residential Internet customers. However, Comcast downplayed any impact from new over-the-top video services flooding the market, with NBCUniversal LLC CEO Steve Burke saying they are so far "not all that material to our business."

On the revenue front, Comcast brought in $21.2 billion during Q2, beating analyst expectations of $20.9 billion. Earnings per share were $0.52, also besting the Thomson Reuters consensus estimate of $0.48. The cable business, which reports separately from Comcast's NBCUniversal entity, reported revenues of $13.1 billion. Cable capex was roughly flat at 14.9% of cable revenue compared to 15.1% a year ago, but rose in real dollars to $2 billion, up 4% from the year-ago quarter. Comcast has focused capital expenditures recently on expanding network capacity and building out new network lines to serve business customers.

The commercial services business was another bright spot in the earnings report. While the rate of revenue growth for business services has slowed from around 20% in earlier years to 12.6% in the most recent quarter, revenues still continue to rise, with Comcast raking in $1.5 billion in Q2.

Comcast's quarterly earnings reports are almost always a treasure trove of information compared to the details that other companies regularly choose (and choose not) to share. Here are a few more nuggets from the latest financial filings and Comcast's earnings call.

On broadband
Comcast is still bullish on its prospects for further broadband growth, noting that its penetration rate is still only 45% across the company's customer footprint. Executives continue to tout speed increases as well as innovation in home WiFi services. CFO Mike Cavanagh said today that Comcast expects to offer DOCSIS 3.1 broadband to the majority of homes passed by the end of this year, and currently 55% of residential customers take broadband packages with speeds of at least 100 megabits per second downstream.

On home security and automation
For the first time, Comcast broke out the subscriber numbers for its Xfinity Home offering in Q2, which includes both home security and home automation services. The company crossed the one-million mark for Xfinity Home subscribers (1.03 million in total), adding 71,000 new customers compared to 70,000 a year ago. Comcast didn't report specific revenue numbers for the service, but it said that Xfinity Home was a substantial contributor to the "Other" category in its earnings report, which jumped to $685 million in revenue in Q2 of 2017 from $655 million in Q2 of 2016.

On Xfinity Mobile
Xfinity Mobile is the new mobile service that Comcast launched this year through an MVNO agreement with Verizon. While still early in the product's lifespan, Comcast's Watson said that Xfinity Mobile is scaling well, and that about half of new customers are buying service through a digital channel, which eases Comcast's sales burden. Watson also noted that most customers are buying Comcast's by-the-gig mobile packages rather than unlimited data plans, suggesting the value of that marketing approach.

On M&A
Rumors continue to swirl over who Comcast should buy or partner with next, but CEO Brian Roberts responded calmly to analyst questions about the M&A possibilities today, noting that the business is doing well all on its own.

"While yes we always look at the world around us, and we do our jobs, frankly, in looking at opportunities," said Roberts, "we love our business."

He added, "We really feel we're not missing anything."