How Altran plays a pivotal role in 5G, edge

Altran may not be a 'household' name in telecoms circles right now, but it's shaping up to be a key influencer in the 5G market. The company not only provides technology and integration expertise to operators and systems vendors, but is also playing a pivotal role in industry partnership programs.

The firm is a long-time provider of engineering and R&D services to companies in multiple verticals, such as aeronautics, defense, energy, transport and more, but it has ramped up its presence in the telecom sector in recent years with several strategic acquisitions and partnerships, including the integration of Alcatel-Lucent's 4G/LTE engineering team in 2014 and the US$2 billion acquisition of Aricent in March 2018.

And now Altran is itself being acquired: Technology services giant Capgemini, spying the opportunity in communications and technology consulting and systems integration, is in the final stages of buying Altran in a deal valued at $4.1 billion.

In terms of the telecoms sector, Capgemini is bringing on board a lot of existing activity. Altran's telecoms and media division is aiming to make itself an indispensable partner to companies in next-generation communications networking markets by focusing on three domains, says Shamik Mishra, the company's chief architect and lead for telecom segment and head of R&D in networks and computing.

The third is digital design services, where Altran's unit called frog, which came aboard as part of the Aricent acquisition, is the key example. "We think 5G will be big in multiple use cases and they will all need digital design in terms of user and operational experience  there is a significant need for a secure digital ecosystem," says Mishra. 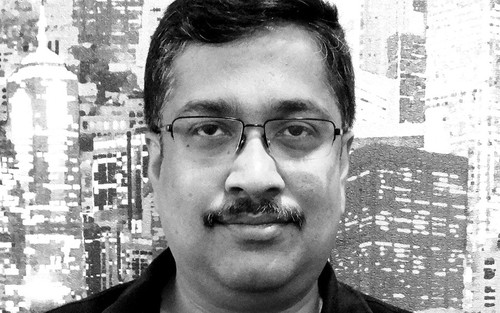 Altran's Mishra: "Without third party apps developers there is no edge story."

Along with the rest of the industry, 5G-related developments are front and center for Mishra's team, which has almost 10,000 Altran engineers working on communications and computing developments. "We reinforced our 5G investment last year. At Aricent, we had developed software frameworks for 5G RAN and core systems that we licensed to clients, following on from the success Aricent had with eNodeB and 4G core frameworks. We see a growing opportunity in 5G  we have sold 20 licenses for RAN, core, transport (fronthaul) and edge for 5G," says the Altran man.

It's also heavily engaged as a partner to chip and system vendors, enterprises and telcos (including various units of Vodafone) on their 5G strategies, noting late last year that it is involved in more than 50 "active" 5G projects around the world. Those engagements will be supported by Altran's investments in facilities dubbed World Class Centers (WCCs): "These are for advanced network developments  it will be like a 5G-lab-as-a-service, with one in Europe and one in North America," says Mishra, who notes the European WCC will be "focused on developing 5G applications for operators."

Edge efforts
Altran's latest big push has been on edge computing developments for telcos. It is heavily involved in the GSMA's Operator Platform initiative that is focused initially on edge, and is working with Telefónica, KT, China Unicom and Telstra to enable multi-operator edge computing-based services.

"In edge computing it is early we believe it will only succeed when the application developers see the value in the operators' proposition  without third party apps developers there is no edge story," states Mishra. "The large webscale companies have done a lot to attract developers to their platforms  the question now is, can the telcos also do the same?" he asks.

Mishra says Altran is focused on "a simple way to enable app onboarding, as well as federating operators so that developers can access a bigger footprint," and is believed to be collaborating with edge computing specialist startup Ori Industries for those particular efforts.

"We're collaborating with a number of specialists, but we've also been leaning a lot on open source  CNCF [Cloud Native Computing Foundation], Kubernetes  as well as on in-house work. There's still a lot to work out in terms of edge computing. We don't know which models will make money. There are no standards but we can't wait for that  the operators need to be more agile and get involved in PoCs [proofs of concept]," says Mishra. "We're looking at a lot of different aspects  what is hype and what is real  and at business models, what the telco edge is capable of with certain applications, whether there is a need or a global marketplace for edge applications. And of course, we're looking at security  with edge computing the attack surface increases dramatically," says the Altran executive.

Its edge efforts also stretch into the cable operator sector, where Altran is working with CableLabs on "Project Adrenaline," an open source initiative that aims to help the cable sector build and manage edge networks.

Partnerships and industry look key to how successful Altran can be as telecoms network strategies evolve: The company has embedded itself in working groups within the Linux Foundation  Mishra is a board member on the LF Edge technical advisory council  and at the Telecom Infra Project (TIP), where Altran "is extremely dedicated to open RAN," notes Mishra.

For more on these topics, see: