Selling units blocked from buying American technology is becoming habitual for Huawei. First it was Honor, a device business that is suddenly rampant in China while Huawei's remaining smartphone division withers. Next up is the less showy server unit, according to a report from Bloomberg. Unable to procure x86 processors from Intel, the Huawei unit is being sold to a mysterious consortium that includes at least one government-backed buyer, according to Bloomberg's sources.

A x86 server business unable to buy x86 processors is about as useful as a plane without wings. Unfortunately for Huawei, there are few alternatives to Intel. Last year, S&P Global Market Intelligence reckoned the US chipmaker's share of the market for data-center processors was between 90% and 95%. 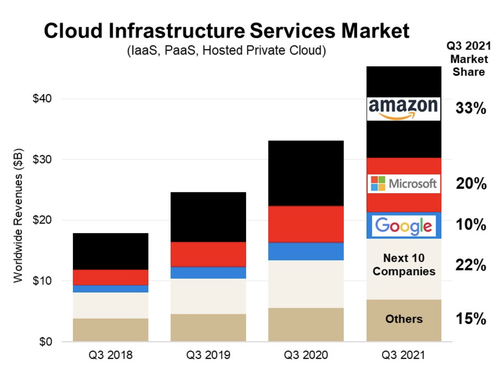 Even if Intel is not selling the chip, it steers the technology. AMD, Intel's challenger, admits as much in filings with the US Securities and Exchange Commission. "Intel has been able to control x86 microprocessor and computer system standards and benchmarks and to dictate the type of products the microprocessor market requires of us," it said in its last quarterly update.

This sounds like a massive problem for Huawei's fledgling cloud business, recently touted by Eric Xu, one of Huawei's rotating bosses (dizzy yet, Eric?) as the "fastest-growing cloud service provider in the Asia-Pacific." No cloud service provider could exist without data centers and the server racks that inhabit them. Denied servers, Huawei could still develop software for use in the cloud. But it could hardly challenge AWS, Google Cloud, Microsoft Azure and Chinese favorite Alibaba as a major cloud player.

Despite Huawei's bullishness, the cloud business remains tiny alongside the market leaders, according to analysts who track this market. It has not even in the top five at home, says John Dinsdale, the chief analyst and research director at Synergy Research Group. "The leader in the Chinese cloud market is Alibaba, followed by Tencent, Baidu, China Telecom and China Unicom," he tells Light Reading. "Huawei is in the top ten but not the top five."

Canalys, another analyst firm, is somewhat more positive, reckoning Huawei has carved out a 20% share of the Chinese market. But even this would give it only about $1.2 billion in revenues. Internationally, Dinsdale puts Huawei's market share at just 1%. "On a worldwide basis, Huawei is in the top 20 ranking of cloud service providers, but near the bottom of that ranking." Meanwhile, the top three providers  AWS, Google and Microsoft  account for a combined 63% of all spending, and their dominance appears to be growing.

Synergy's figures would give Huawei just $450 million of the $45 billion that companies spent on various types of cloud service in the third quarter. This would represent as little as 2% of Huawei's total sales over that period  hardly enough to excite Huawei fanboys (if such creatures exist) or terrify its US opponents.

Still unclear is whether Huawei's inability to procure x86 chips has been a constraint so far. It had not answered questions on this topic at the time of publication and had no comment on the Bloomberg report. But a sale of its server business might grease the wheels in the future. "For the cloud business, the potential divestment of the x86 portfolio means it can source ready-made servers externally if needed and permitted," says Matthew Bell, chief analyst at Canalys.

Unless the buyer of the server unit also figures on the US trade blacklist (named the Entity List), it would be free to purchase components and software from US organizations, including Intel. Huawei could then rely on this Chinese entity as a supplier of the server chips it needs for its cloud business.

The danger is that US authorities wake up to what is happening. So far, they have seemed oblivious to the rise of Honor, which claimed an 18% share of China's smartphone market in the recent third quarter, according to Canalys, up from 9% in the second. US Sen. Tom Cotton (R-Ark.) and Rep. Mike Gallagher (R-Wisc.) have urged the Biden administration to pay closer attention to Huawei's cloud unit. Their main argument is that it could expose Americans to China's "prying eyes" in countries that use the Huawei technology.

The US approach, however, has been marked by inconsistency. The most extreme example of that is ZTE's omission from the Entity List. A relatively small Chinese rival to Huawei, ZTE served time on the blacklist several years ago for its violation of trade sanctions against Iran. But it was removed after agreeing to pay fines, replace executives and be supervised by US watchdogs. Unsubstantiated claims that its products include "backdoors" for Chinese spies were enough to condemn Huawei. And yet ZTE has more obvious links to China's government.

Even if the bits Huawei sells remain free to buy American technology, Huawei's ability to challenge the cloud establishment remains doubtful. James Crawshaw, a principal analyst with Omdia, points out that a similar move by a Western equipment maker such as Ericsson would not be taken seriously. "Huawei has been in this game for a while but I can't see how they can compete against Alibaba." he said. For now, the available data would seem to back up his view.