NASHVILLE, Tenn.  FiberConnect 2021  Nearly everyone here agrees that broadband needs to be more available and affordable. The top telcos speaking at this show see a broadband future where taxpayers fund improved broadband networks and the government gets Internet companies to chip in, too.

What isn't clear is whether current programs to help people afford broadband services will survive and step up to meet the demands of the underserved.

In his remarks on Tuesday morning, Windstream CEO Tony Thomas advocated for expanding the number of contributors to government programs like the universal service fund (USF), which helps Americans pay for essential communications services. The USF is mainly funded by telecom, cable and VoIP carriers who charge fees tacked onto voice services.

Landline voice revenues  "the thing that's been contracting by about 20% per year  are underpinning the financial solvency of the USF," Thomas said to the crowd gathered here.

"But we need other companies who leverage the digital infrastructure  Netflix... Google  it'd be a very small fee, that we all pay to across the country, but not just push down on a small set of carriers," he said.

"I don't think we'll be adding enough landline phones to make up for the decline (in USF subsidies) in the USA," Thomas warned. "And that would be a shame if ... the financial solvency of universal service funding dissipates here in the next few years... especially the back end of COVID, where everyone sees the value of broadband."

Folks here are abuzz with the discussion of the upcoming infrastructure bill being debated in Congress this week. The nearly $1 trillion package is likely to include tens of billions of dollars to fund broadband infrastructure expansion. But even as that will take months, maybe years, to go from the halls of Congress to the bank accounts of vendors and service providers, other funding is fueling fiber investment optimism.

Pushing back on the status quo

Gary Bolton, the president and CEO of the Fiber Broadband Association, said that there's public and private sector investment in broadband on the horizon. In an interview with Light Reading, he noted there's no need to wait on the infrastructure bill to start fiber expansion. "If you look at right now, what's already been appropriated  $9.2 billion for RDOF  so that's going to start coming out. That's going to be fueling us right now," Bolton said. "Plus there are other programs. As a matter of fact, you know, California had a $7 billion state surplus that they just unanimously approved for broadband. And that's just one state."

And, as you might expect, the carrier execs here have specific ideas about how those funds should be spent.

In his remarks on Monday, C-Spire CEO Hu Meena said that government funding for broadband infrastructure should be fiber-focused, not carved up between satellite, fixed wireless, cable broadband and telecom DSL. "For too long, policymakers have focused on making broadband funds technology-neutral; our country can no longer take that stance if we want to be competitive," he said.

"Americans are no longer satisfied with copper technologies, that should have gone the way of the typewriter and the fax machine. Today, policymakers, debating over [broadband] speeds is a disservice to our country and is simply a result of incumbents trying to maintain the status quo, and being paid extra to do."

That last line got a round of applause for the folks gathered here  heartland telcos and cooperatives, community broadband providers and family-run ISPs. 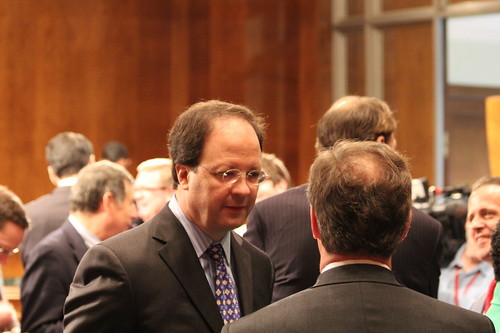 Cloud hyperscalers, Tier 1 carriers, incumbent cable providers, billionaire-funded satellite science projects  all of those firms took their lumps in the sessions here for their greed and avarice, their monopoly power and their refusal to "play fair" in the broadband marketplace.

But the billions of dollars that will invariably fund some broadband expansion won't change the competitive field of play and it won't lift people out of poverty, no matter how many people and PowerPoint decks here can equate electricity with fiber-based broadband.

Windstream's Thomas pointed out that there are, by his estimates, 42 million homes that "are not connected to adequate broadband in the US. That is the challenge in front of us," he said. "The other challenge is a third of the folks who do have broadband in the country have adjusted gross income of less than $30,000 and struggling to pay their bills. We have to conquer both of these elements to truly conquer the digital divide."