Frontier Communications announced late last week it intends to exit Chapter 11 bankruptcy on April 30, and start to trade its new common stock on the NASDAQ exchange on May 4.

With all of its regulatory approvals in hand, Frontier "is ready to set a new course as a revitalized public company," John Stratton, Frontier's incoming executive chairman of the board, said in a statement. 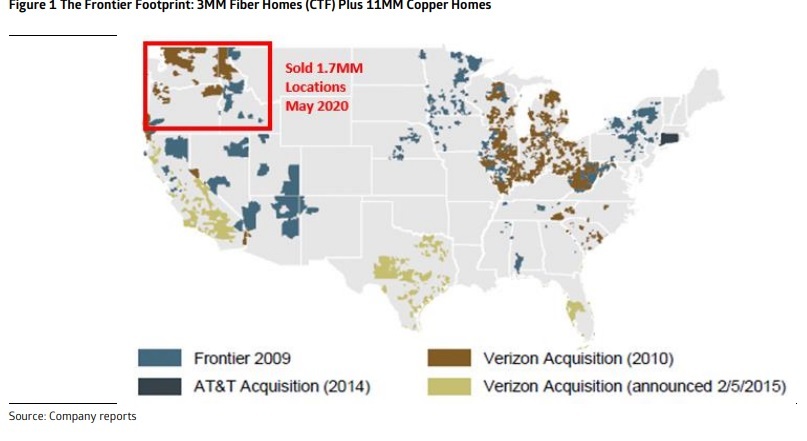 Analysts expect Frontier, armed with FTTP upgrades, to change the narrative of the company and alter a view that sees its story as the tale of two footprints comprised of 3 million fiber homes and 11 million copper homes.
Click here for a larger version of this image.
(Image source: Cowen)

Word of the exit date arrives just over a year after Frontier filed for Chapter 11 bankruptcy protection via a plan that erases about $10 billion of debt. The company's modernization initiative includes an initial deployment of fiber-to-the-premises to an incremental 3 million homes, with a focus on FTTP upgrades in brownfield areas. If those upgrades go well, Frontier could push forward with FTTP deployments to an additional 6 million homes and raise its FTTP share of broadband-capable homes to about 85%.

Stratton noted that Frontier upgraded more than 60,000 locations from copper to FTTP in 2020, calling it "just one example of the important work already underway."

Frontier has set an investor call for April 30 at 10 a.m. ET, intending to discuss the path forward and vision for the company along with Q1 2021 results.

As for that path forward, some analysts expect Frontier to stabilize, delivering modest growth, rather than explosive growth, in the coming years as it pushes ahead with FTTP upgrades and partly benefits from the Rural Digital Opportunity Fund (RDOF) and other stimulus projects.

Meanwhile, New Street Research launched coverage of Frontier last week with a target of $111, calling it "conservative." New Street Research sees Frontier as a layered asset  a fiber asset in California, Texas and Florida, and a "ratty old ILEC" that's scattered across 22 states.

"The fiber asset disappeared inside the ratty old ILEC, which soon staggered into Chapter 11. Investors seem to have forgotten the fiber asset is there," they said in a research note.

Cowen has a similar view, noting that the "New Frontier" story is a tale of two markets  its 3 million fiber homes and 11 million copper homes. "We expect the company to change the narrative" with an initiative focused on stabilizing and optimizing its fiber footprint, Cowen analyst explained in research note. "Perhaps most compelling, because of the eroding penetration, there are a meaningful number of homes in the footprint that already have the fiber drop (the fiber lateral to the home) and ONT (equipment on the side of the home) to alleviate success-based capital and makes for an easier sell."

New Street Research also sees some wireless potential for Frontier if it were to pursue an MVNO deal and perhaps spectrum in a targeted fashion.

"Once they have built a base of subscribers on fiber, it will be lucrative to sell those customers wireless too," they wrote. "On very modest penetration assumptions, it could be worth $3BN on an MVNO model, and $7BN if they deploy spectrum the way cable will with CBRS."

Frontier, which is slated to trade on NASDAQ under the "FYBR" ticker, also announced a new board as the company inches out of bankruptcy: