Bernard Ebbers, the former boss of WorldCom and one of the most infamous corporate swindlers of all time, has died at the age of 78, just weeks after he was released from prison.

Ebbers was reportedly battling serious medical problems and his weight had quickly fallen from 200 to 147 pounds before a US judge ordered his release in December. He died on February 2, according to media reports.

The former telecom chief presided over the biggest accounting fraud the sector has ever seen during his tenure at WorldCom, a long-distance operator that ran into problems in 2000, when the dotcom bubble of the late 1990s finally burst.

Ebbers was subsequently found guilty of accounting fraud, which he carried out mainly by recording expenses on WorldCom's balance sheet to boost profits. Following an investigation by the US Securities and Exchange Commission, WorldCom was estimated to have inflated its total assets by around $11 billion.

Its bankruptcy filing in 2002 resulted in major losses for shareholders. Ebbers received a 25-year jail sentence in 2005 and entered the Federal Correctional Institution in Fort Worth, Texas, in September 2006. The enormity and impact of his illegal actions earned Ebbers an inaugural place in the Light Reading Hall of Fame.

Nicknamed the "telecom cowboy" for his habit of wearing boots and jeans to meetings, rather than the usual corporate attire, Ebbers fooled analysts and investors into believing that his company's sustained growth was legitimate.

As WorldCom's CEO, Ebbers built the company into a national force through a spate of acquisitions, including a $37 billion takeover of rival MCI in 1998. He ran into problems when competition authorities rejected his plans to buy Sprint in a $115 billion deal in 1999.

The failure of that deal and a downturn in the sector led to a fall in WorldCom's share price and put pressure on Ebbers, who eventually resigned in April 2002. The company admitted to various accounting errors just two months later, triggering the investigation that eventually led to Ebbers's conviction. 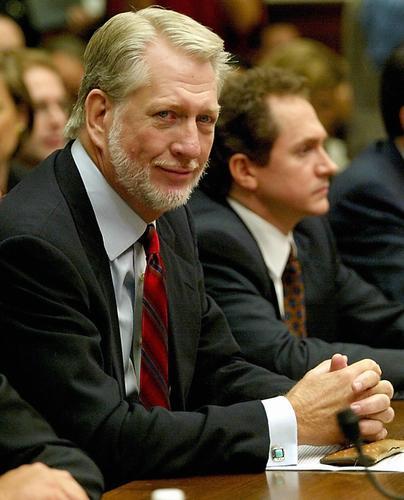 Coming around the same time as another major accounting scandal at energy giant Enron, the WorldCom case prompted calls for stricter oversight of corporate governance. In 2002, the Sarbanes-Oxley Act introduced tougher requirements for publicly listed companies.

Six years later, another Bernie surpassed Ebbers with a Ponzi scheme estimated to have cost investors about $65 billion: Bernie Madoff received a 150-year jail sentence for his central role in that scam.