Multi-antenna arrays are key to delivering the performance that 5G promises, so let's look at how we go from today's 4G networks to a 5G future with the help of MIMO.

The shift to 5G mobile standards promises to deliver networks that support 100 times greater data rates for each user than available today, have 1,000 times more capacity, and support for 100 times as many devices per unit area. It's also expected to achieve end-to-end latencies of 1ms, 99.999% efficiency and 100 times greater energy efficiency than 4G.

Much of the enabling technology for building 5G networks involves doing more things at once, which poses a challenge to both design and test engineers. So we're looking at some of the key technologies involved in implementing 5G networks, and some strategies for testing them.

The channel challenge The upper limit for information that can be sent over a channel is defined by its bandwidth (measured in hertz), and its signal-to-noise ratio. Therefore, to get more data to each user, you can increase any combination of the number of channels you use, the bandwidth of each channel, and the signal to noise ratio.

5G networks use multiple-input, multiple-output (MIMO) strategies to create multiple physical paths between transmitter and receiver to deliver more data streams within the same block of time and frequency resources.

With the current mobile spectrum map already crowded, 5G networks must move to millimeter wave (mmWave) frequencies to create channels of greater bandwidth. The limited propagation of such signals relative to those used in today's 4G networks will also demand the use of beamforming to direct as much of their energy towards the user as possible.

It's also possible to improve the signal-to-noise ratios of each channel using highly directional antennas. The impact of this approach is limited, and becomes less effective as the number of channels or the channel bandwidth increases.

The MIMO solution Many combinations of multi-channel and multi-antenna technologies are defined as MIMO. Spatial diversity, in which the same signal is sent over multiple different paths, improves the signal to noise ratio. This is represented in the image below by the black dotted paths connecting to the rightmost user. Spatial multiplexing, in which different signals are sent over different paths, improves capacity and spectral efficiency. This is shown as the red and blue paths reaching the user in the center-right of the same figure. 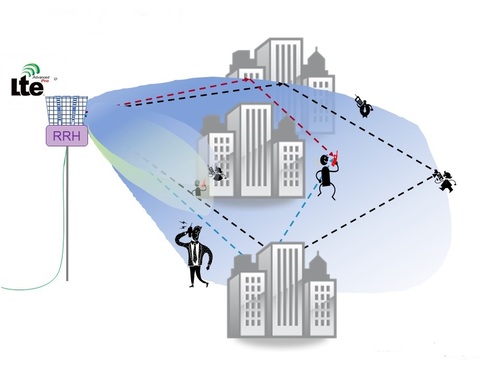 One of the advantages of MIMO is its flexibility. It can be used to improve the reliability of multiple connections, their capacity and/or their spectral efficiency (bits per second per hertz).

MIMO is already in use in 4G networks, and in WiFi. Release 8 of the 3GPP standard defined the use of two transmit antennas and two receiver antennas in early 2009, and many LTE networks already support this 2x2 MIMO. LTE-Advanced (3GPP Release 10, published in 2011) supports eight streams of download MIMO, while LTE-A Pro (3GPP Release 13, published in early 2016) supports Full Dimension (FD) MIMO.

FD-MIMO allows for the use of eight streams at once, a 64-element (8x8) antenna array, and adds elevation data for better beamforming. The approach enables operators to service multiple users with a channel each, or to service one user with multiple channels to increase the reliability or capacity of their connection. The elevation data, which works alongside the azimuth data available in earlier revisions of the standard, enables base stations to steer beams to users separated vertically, for example to people in a multi-story building.

For 5G, the plan is to introduce Massive MIMO, which uses a very large array of antenna elements (perhaps 128), the same number of transceivers, and a different way of measuring the channel-state information. The base station transmits 128 different streams of data from the antennas in the array, with each antenna radiating a unique signal, not just a phase and amplitude-modulated version of the same signal as in FD- MIMO. The technique may only work below 6GHz and is limited to time-division duplex networks.

Under Massive MIMO, streams are sent from all the antennas to all the users at once, within the same time-frequency resource block. The different streams are designed to minimise interference between signals going to different users. 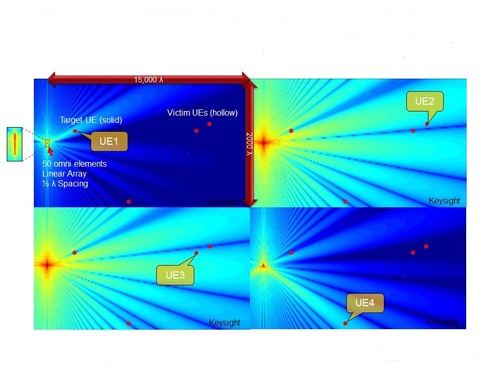 Visualizing how a Massive MIMO base station would transmit to four users within the same resource block.

The image above shows the way in which a linear antenna array with omnidirectional elements would transmit to four users using the same resource block. Because each users terminal is sending pilot tones to the base station, it knows what the channel between itself and each of them look like and adjust the simultaneously transmitted signals for the best aggregate result.

The image at top left of the graphic above shows the base station has designed a relatively low power signal for user 1; since they are close by this ensures the signal does not overlap with any of the other users. At top right, the signal for user 2 is not optimized, so a lot of power is being wasted to deliver the same amount of signal to user 2 as to user 1.

The image at bottom left shows the signal for user 3, which has been designed so it produces nulls at the locations of the other users. The fourth image, bottom right, shows the radiated signal for user 4, which is similar for user 1, but uses more transmission power to cover the additional distance from the base station.

The key function of the algorithm that designs each signal is to drive enough signal to reach the specific user as efficiently as possible, while creating nulls at the other users' positions. It should also ensure that when all the radiation patterns are added together, the only signal that arrives at each user's location is its own.

To return to a comparison between Massive MIMO and FD-MIMO, it is worth noting FD-MIMO relies on the handsets to generate the channel state information. This is fine when the number of channels is limited, but could cause a power consumption problem if an operator tried to apply the technique across as many channels as used in a Massive MIMO implementation. A Massive MIMO implementation doesn't face this issue because the base station derives the channel-state information from pilot tones sent by the users' equipment.

Beamforming Beamforming uses an array of antennas to control the direction of a wavefront by weighting the magnitude and phase of each signal in the array. It will be a particularly important technique in 5G networks that use mmWave frequencies, to overcome their poor propagation characteristics by creating high-gain antennas.

One positive side effect of the poor propagation characteristics of mmWave signals is that unless users are standing next to each other, they are naturally isolated from one another because of the beam's extreme directionality. This simplifies Massive MIMO implementations since designers may not need to worry about encoding streams or creating nulls at other users' locations.

It's also worth remembering that shifting to mmWave signals to access more spectrum creates challenges in generating, up-converting, down-converting, and analyzing the signal. The number of streams of data that the base station needs to handle will also dramatically increase, stressing the supporting network.

Developing 5G MIMO Tools that help users design, simulate, and test 5G systems are evolving. Here are a couple of recent examples, and a brief description of their capabilities.

This MIMO test system is used in R&D and design, verification and test, and can test sub-6 GHz LTE MIMO, FD-MIMO, and Massive MIMO setups. There is also a version addressing mmWave frequencies, for testing implementations such as Verizon's pre-5G (V5GTF). It supports complex carrier aggregation, multi-stream MIMO, beamforming, and a full suite of RF parametric tests. 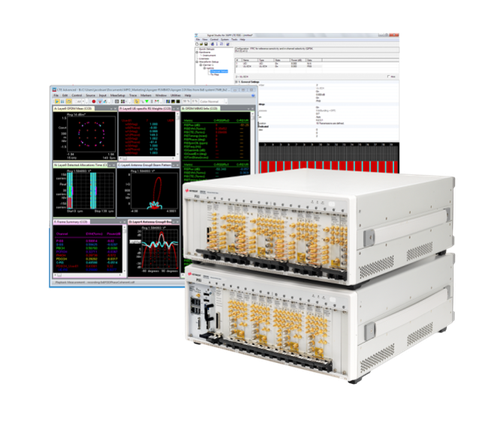 The software that drives the tool can design, generate, and measure various 5G waveforms as well as custom OFDM signals and IQ waveforms. It can support single or multi-carrier situations, with carrier aggregation, if necessary. The graphic below shows the simultaneous demodulation and measurement of eight component carriers typical of 28GHz beamformed signals in the V5GTF system. 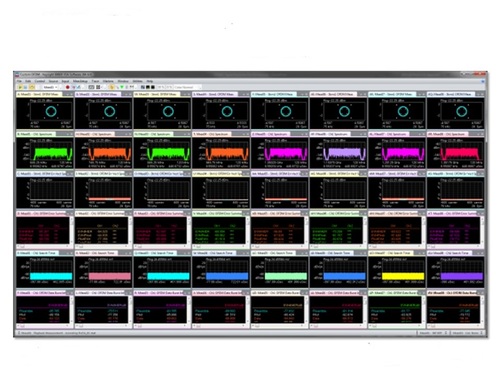 Demodulation and measurement of eight component carriers in a 28GHz Verizon pre-5G implementation. 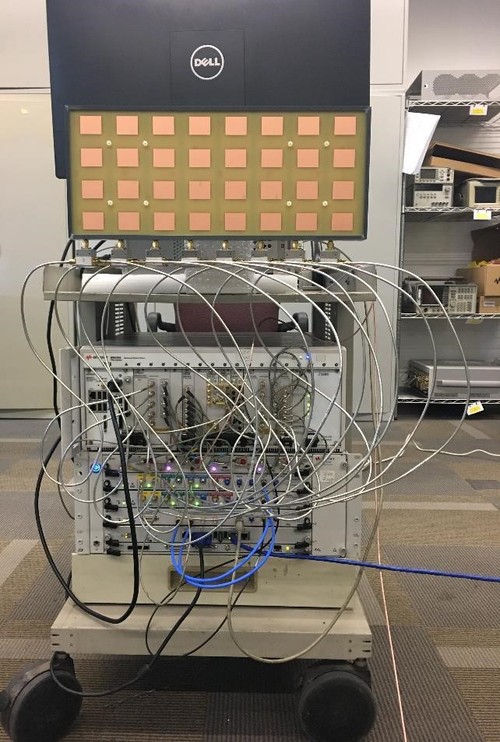 A modular approach to large antenna arrays and beamforming.

The software demodulation measurement and visualization tools that go with this hardware can make finding and testing beams much easier. Because the measurement hardware is fully phase-coherent and carefully calibrated, you can also perform vector-signal analysis.