Rarely has the division between a pushy supplier and a down-at-heel telco been laid so bare.

Connecting farmyard animals and other dumb stuff to 5G networks will generate billions of dollars in new service revenues, was the message from Ken Hu, one of Huawei's chief executives, during a conference hosted by the Chinese equipment giant in London last week. Just minutes later, Johan Wibergh, Vodafone's chief technology officer, was on the same stage telling the audience that 5G is "overhyped." It was like watching a door being slammed shut in the face of a traveling salesman.

And there were more 5G doubts cast during the two days of Huawei's Mobile Broadband Forum event. Gavin Patterson, CEO of UK telecom incumbent BT Group plc (NYSE: BT; London: BTA), told attendees that he and other CEOs are "struggling" to pin down the business case for the next-generation mobile technology. In an afternoon breakout session, executives from Vodafone Group plc (NYSE: VOD) and Deutsche Telekom AG (NYSE: DT) gave short shrift to the technology's most ardent promoters. "We should stop talking 5G bullshit," said Santiago Tenorio, Vodafone's head of network strategy and architecture, echoing his boss's remarks, while Antje Williams, Deutsche Telekom's 5G executive program manager, insisted that 5G new radio, the most heavily publicized feature of the standard, is not particularly revolutionary. (See DT Is Not Going Radio Gaga About 5G.) 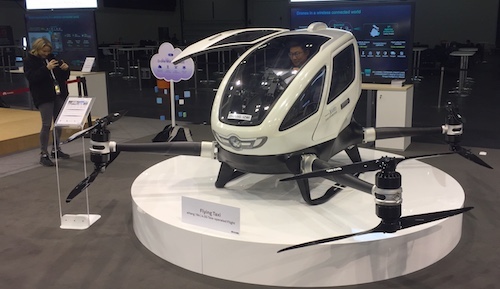 One of several technologies that Huawei showed off at last week's Global Mobile Broadband Forum, the flying taxi will account for a quarter of citizens' journeys by 2030, according to Dubai's transportation authority. Whether 5G will by then have given way to 6G is another matter...

Operators are not about to pull back on 5G, but their realistic priorities are not about near-term revenue growth. As vendors like Huawei Technologies Co. Ltd. and Sweden's Ericsson AB (Nasdaq: ERIC) continue to bang on about the 5G sales opportunity from connected cows, connected cars and connected everything, service providers are starting to regard 5G mainly as an opportunity to fatten profit margins through cost savings -- at least in the short term.

This 5G efficiency story is actually compelling. The 5G new radio alone is about ten times more cost efficient than 4G, Wibergh told conference attendees last week. As the volume of data traffic on networks continues to skyrocket, and revenues per bit are squeezed down, operators need every means possible to reduce costs. "The regulator requires operators to reduce charges for customers but also increase data rates, and operators are starting to promote unlimited data for customers," said Guangyi Liu, the wireless chief technology officer for the research unit of Chinese telco China Mobile Ltd. (NYSE: CHL), in explaining the pressure his company is under during last week's event. (See Nolle: In 2017, Cost Per Bit Exceeds Revenues and China Mobile to Deploy 10,000 5G Basestations by 2020.)

But a new and more efficient radio would be just one way of reducing expenses. For most chief technology officers, 5G has become synonymous with a network and operational transformation whose purpose is to make telcos look more like the cloud companies they admire and fear in equal measure. For all the fascination with a new radio, the real 5G revolution will come in the shape of more software-based and highly automated networks. And while these might unlock new business opportunities in time, the efficiency case is a much easier one to make now.

Take Germany's Deutsche Telekom, for instance, which has jettisoned its "growth areas" strategy from several years ago but still expects to realize at least 1.2 billion ($1.4 billion) in annual cost savings from network transformation. While executives rarely discuss 5G in the same breath as the "pan-net" project that is responsible for much of this overhaul, there is clearly an overlap on objectives. "Cloudification," pan-net's central tenet, is also a 5G goal, said Williams during last week's event. A technique called "network slicing," which builds on this cloudification, is another priority, allowing operators to operate multiple independent network services over the same infrastructure. Both will boost efficiency, if they work out as planned. (See DT's Pan-Net Still at Start of the Marathon.)

Next page: The wow factor

jerehada 11/27/2017 | 3:39:16 AM
Nice Piece Nice piece that sums up the status quo. You hint at the real issue ....  "They (analysts) simply doubt that operators will get rich from it". How can a telco build use cases that won't simply allow FANGs to eat their cake after the massive investment densification and 5g?  The opportunity to offer unlimited is hardly pursusive. Then there is the transmision/backhaul "big game" to be resolved that forms a huge part of the business cases.

Just one final food for thought do the larger incumbant operators (own backhaul and leadership in spectrum ownership) have an incentive accelerate 5g?
Reply | Post Message | MESSAGES LIST | START A BOARD

Phil_Britt 11/24/2017 | 11:29:49 AM
Re: 4-5G IoT likely like other services in their infancy...a few figure out profitable service, plenty of untapped potential still out there, there are still untapped services to be offered, some of which will be done profitably, but others will be money losers for some time yet.
Reply | Post Message | MESSAGES LIST | START A BOARD

BNorthstream 11/23/2017 | 4:29:53 AM
Re: 4-5G Good point, on standardization and product development level it's progressing well with commecialization of 5G happening sooner rather than later.
Reply | Post Message | MESSAGES LIST | START A BOARD

BNorthstream 11/23/2017 | 4:26:29 AM
Re: 4-5G I read somewhere that there are about 1.5B cows on earth so there must be some potential. The bigger question is what the potential is for operators. Of the few bigger ones that are reporting IoT revenues (Vodafone, Telefonica and Verizon) growth has basically been flat this year. To us it signals that it has become an increasingly competitive market with fast price erosion.
Reply | Post Message | MESSAGES LIST | START A BOARD

DanJones 11/22/2017 | 3:20:43 PM
Re: 4-5G Yep, and some of the promises of 5G will probably never be fufilled. Some of the timetables for self-driving cars still seem insanely optimistic to me, for instance.

That doesn't mean 5G isn't the first industry-wide cell standard designed for IoT, rather than having that tacked on as an after-thought. That is probably going shake-up service offerings in ways we haven't thought of yet, for starters.
Reply | Post Message | MESSAGES LIST | START A BOARD

Gabriel Brown 11/22/2017 | 10:05:10 AM
Re: 4-5G If you're referring to marketing gas, then OK, the 5G label suffers from premature overexposure -- but it's hard to think of a technology that sits outside the normal marketing hype/disillusion/reality progression.

Yes, it's this really. Situation normal.

Behind the marketing gas, there has been a lot of progress this year.
Reply | Post Message | MESSAGES LIST | START A BOARD
Page 1 / 2   >   >>
EDUCATIONAL RESOURCES

Nokia return will not end doubts about O-RAN