Britain just can't catch a break. As Brexit enthusiasts in government work on disemboweling the constitution, and hastening the break-up of the United Kingdom, telecom experts have been weighing in with chastening assessments of its 21st century communications infrastructure.

First it was the FTTH Council Europe, a lobby group for the fiber access broadband industry, which continues to bandy about a chart showing the UK at the bottom of a ranking of countries on all-fiber take-up. Now analysts at OpenSignal have joined in on 5G. Commercial services have barely arrived, but the UK is already bringing up the rear, trailing 11 other countries on maximum connection speeds, according to OpenSignal's analysis.

The UK Lags in Comparisons of Fiber Take-Up 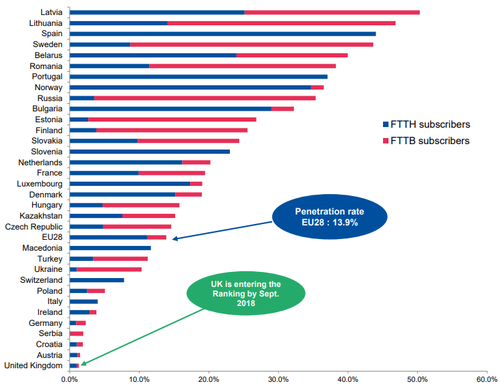 The good news is the maximum UK download speed measured on 5G smartphones is a healthy 599 Mbit/s, which seems way more than even Netflix junkies and the most avid gamers would need (Gabriel Brown, a principal analyst with Heavy Reading, has recorded even higher speeds during his own tests in the London area). The speed has also risen 10% since OpenSignal's previous update in July.

Still unclear is what 5G users can expect on average.

But the difference between maximum 5G and top 4G speeds is not as great as anyone listening to 5G sales pitches might have expected. Measured in July, the UK's highest 4G download speed was 441 Mbit/s, according to OpenSignal. 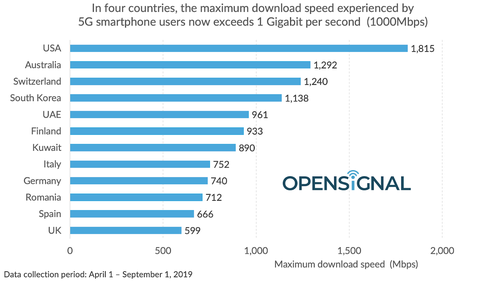 The Usain Bolt of the group is the US, where the top 5G speed of more than 1.8 Gbit/s is a testament to the power of millimeter wave spectrum. Unfortunately, it seems unlikely anyone would experience this rush unless they were standing next to a basestation in an area as uncluttered as the Salt Flats of Utah, which are probably not high on the list of planned 5G deployments. Still, the US improvement over 4G, which delivered just 678 Mbit/s in July, is significant. The feel of all that bandwidth pumping through a 5G device, delivering a buffer-free video stream to your eyeballs, must be truly exhilarating. 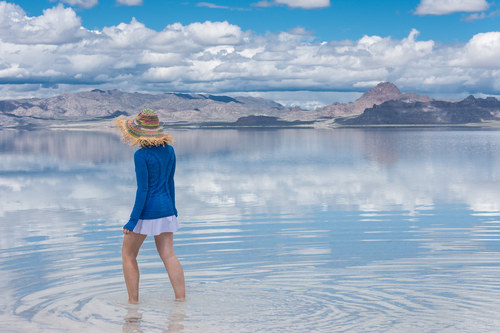 Yet even without millimeter wave spectrum, Australia, South Korea and Switzerland all topped 1 Gbit/s in the latest assessment. That somewhat undermines the case for a frequency band that gives up when it encounters the flimsiest of obstacles. No wonder there is growing US interest in mid-band spectrum, which caters to people who live behind walls and surround themselves with furniture.

The UK's position does not instill confidence. Scott Petty, the chief technology officer of Vodafone UK, says Britain must have 5G networks that are competitive with those in other European countries if it is to attract the best technology developers. In a post-Brexit future -- when, quite possibly, the United Kingdom of England and Wales (a motley assortment of former Anglo-Saxon enclaves with a Celtic appendage) neighbors an independent Scotland and a united Ireland -- its economies may need all the help they can get.

A current problem is the dearth of 5G spectrum in the UK market. No operator secured more than 50MHz in last year's mid-band auction, and Three UK, which already had bags of spectrum, has yet to launch a smartphone-based service. In many of the other European countries that OpenSignal ranks, at least one 5G operator has substantially more than 50MHz. In Germany, Deutsche Telekom and Vodafone have each secured 90MHz, while Vodafone also has 90MHz in Spain and 80MHz in Italy, as does local rival Telecom Italia. Swisscom and Sunrise have 120MHz and 100MHz respectively in Switzerland, which comes third in the OpenSignal ranking. And in sixth-placed Finland, the second-highest European country, each of the three Finnish operators owns 130MHz. 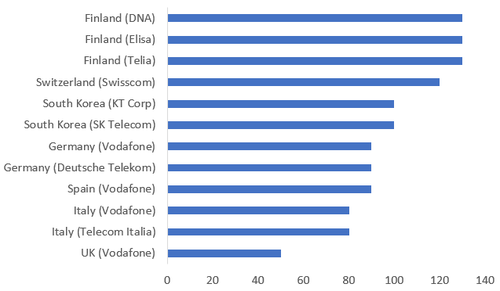 It might all change soon. Three plans to launch a 5G mobile broadband service by the end of this year, and another 120MHz of spectrum is due to go under the UK's auction hammer by spring 2020.

In the meantime, technology developers hunting for gigabit-speed 5G connections will have to go elsewhere.