The satellite operator community is in a state of high excitement following the collapse of a proposed multi-billion-dollar merger between SoftBank-backed startup OneWeb and veteran operator Intelsat.

The two companies had proposed a marriage by which heavily indebted Intelsat Ltd. -- which has an operational fleet of geostationary satellites and annual revenues of about $2.2 billion -- and yet-to-launch OneWeb would merge, with SoftBank Corp. then injecting $1.7 billion into the combined company in exchange for a near 40% voting stake.

But Intelsat's creditors, who were being asked to take a collective $2.85 billion cut on the value of their bonds, refused to back the deal, forcing Intelsat to announce the "anticipated" termination of the agreement: SoftBank and OneWeb are not expected to offer a revised deal.

"There were many stakeholders' interests that needed to be satisfied in this complex transaction. We are disappointed that our bondholders were unwilling to accept the terms of the exchange offers presented over the course of this process," noted Intelsat CEO Stephen Spengler in an official announcement.

Spengler added that, despite the collapse of the deal, Intelsat, OneWeb and SoftBank will collaborate to "jointly develop integrated solutions utilizing both of our fleets," and that Intelsat would "act as a sub-distributor to SoftBank for the attractive application segments of mobility, energy, government, and connected car. As we create integrated services for these applications, we expect to accelerate and enhance our goal of unlocking new and larger opportunities in the communications landscape. We remain focused on achieving our operating priorities for 2017, including the continued commercialization of our Intelsat EpicNG high throughput satellite services." (See Intelsat Invests in OneWeb, Strikes Partnership.)

At the heart of this deal was the vision of using OneWeb's low earth orbit "birds" and Intelsat's geostationary satellites to provide broadband connectivity anywhere in the world, an aim shared by multiple companies such as Alphabet/Google and Facebook, which are looking at alternative ways to deliver those connections, which will play an important role in the development of digital economies and the broad rollout of IoT applications. (See SpaceX Nabs $1B From Google for Satellite Internet, Broadband: It's All Hot Air for Google, How Balloons Can Play a Role In Broadband Delivery, SpaceX Explosion Blows Hole in Facebook's Africa Plans and Facebook Gets Its Drone On.)

Intelsat, which is currently carrying about $15 billion of debt on its books, is already offering broadband capacity that can be used by communications service providers, media companies, governments and others via its fleet, including its new "high throughput" Epic satellites. (See Liquid Telecom Broadens Its Broadband Reach With Intelsat Deal and Intelsat's 33e Enter Satellite Service.)

OneWeb, meanwhile, is still in development phase. But it has an impressive list of backers -- Qualcomm, Airbus, Bharti Enterprises, Coca-Cola and Intelsat, as well as lead investor SoftBank -- and claims it has a design and manufacturing process that will enable the construction and operation of satellites that can offer affordable connectivity for "consumer broadband, connected cars, cellular backhaul and the Internet of Things." (See OneWeb Raises $1.2B From SoftBank, Others.)

OneWeb plans to design and build a constellation starting with 720 low earth orbit (LEO) satellites, the largest in history, in order to provide global internet coverage with industry leading speed and performance, significantly lower latency, as well as a significant cost advantage as a result of advanced, low-risk manufacturing techniques. With more than 10 terabits per second of new capacity and User Terminals containing embedded LTE, 3G, 2G and Wifi, the OneWeb system will extend the networks of mobile operators and internet service providers (ISPs) to serve new coverage areas at a lower cost, bringing voice and data access to consumers, businesses, schools, healthcare institutions and other end users across the U.S. and around the world.

Hooking up with Intelsat would have given OneWeb a quicker time to market, operational expertise, more scale and diversity but, for once, the deal-making prowess of SoftBank chairman and CEO Masayoshi Son, best known in the US for his 2013 swoop on Sprint, didn't pay off. (See Softbank Closes on Sprint Acquisition.)

I'm With These Guys 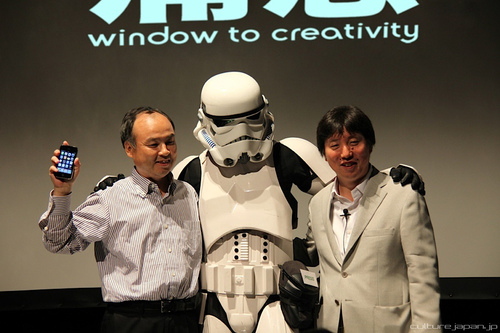 But the SoftBank chairman, whose recent M&A moves include the acquisition of chip giant ARM, an investment in Indian digital payments platform PayTM and a reported increased stake in graphics chips and artificial intelligence (AI) specialist Nvidia Corp. (Nasdaq: NVDA), is not likely to sit on his hands. (See SoftBank Muscles In on ARM in $32B Deal.)

Son is already reported to have reached out to other satellite companies that could hook up with OneWeb, with Reuters reporting that speculation about alternative plans had boosted the share prices of Inmarsat, Eutelsat and SES.

While OneWeb could continue its development alone, all the signs point towards an attempt by SoftBank -- which counts "Aggressive Investment in Internet-related Companies" as a key pillar of its strategy -- to broker a new deal. Watch the skies!

danielcawrey 6/4/2017 | 10:26:53 PM
InvestorsI It seems the problem here has to do with investors who don't think they were going to get a fair share of the transaction.