Hewlett Packard Enterprise (HPE) CEO Meg Whitman is one of several candidates being considered for the top job at Uber, following the resignation of company founder Travis Kalanick, according to a report published in Bloomberg.

Of the six candidates that Uber is considering for CEO, only Whitman's name has leaked out so far. The ride-sharing company is expected to name its new leader by September, although several other top posts also remain vacant, according to the report.

Whitman has been meeting with Uber officials as they consider the CEO's job. In addition to her leadership role at HPE, Whitman has been the CEO of eBay and ran for governor in California as a Republican.

An HPE spokesman told Bloomberg that Whitman is "fully committed to HPE and plans to stay with the company until her work is done." 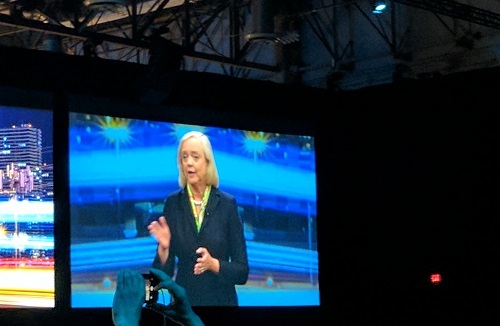 That work includes spinning out HPE's services division to Computer Science Corp., as well as selling software assets to SUSE. Another part of the software division is being sold to Micro Focus later this summer. (See HPE Goes All in With Hybrid IT.)

What could also be adding fuel to the speculation that Whitman will leave is that she stepped down from her duties as president of HPE a few week ago. Antonio Neri, a 20-year company veteran, is now in that role. (See HPE Appoints Antonio Neri as President.)

Founded in 2009 by Kalanick, Uber is valued at about $70 billion but the company has been beleaguered by scandals large and small, including claims of sexual harassment of employees and controversy over how drivers are paid. The appointment of a Silicon Valley veteran such as Whitman could help doctor Uber's image and bring a sense of stability to the company. (See Kalanick Steps Down as Uber CEO.)

Keep up with the latest enterprise cloud news and insights. Sign up for the weekly Enterprise Cloud News newsletter.
Related posts:

Yup. I don't think she would have been a great fit, but a good test case to see how people reacted to a woman at the helm....
Reply | Post Message | MESSAGES LIST | START A BOARD

kq4ym 8/7/2017 | 11:00:25 AM
Re: Whitman It does seem more of a "trial baloon" shot up to see what the public and high level investors might think of the idea. While "Whitman could help doctor Uber's image and bring a sense of stability to the company," may well be true my guess is it's not going to reach that stage to jump ship yet.
Reply | Post Message | MESSAGES LIST | START A BOARD

Yes, but this leak was done so there could be plausible deniability. And Whitman publicly refused, so this was a minor distraction. I don't think anyone thinks she is considering jumping the HP ship (yet).
Reply | Post Message | MESSAGES LIST | START A BOARD

[email protected] 8/2/2017 | 11:39:11 PM
Re: Whitman Maybe but risky if a possible employer leaked my interview I would be furious as it could have great implications at my existing position. I would not even consider an interview at such an organization.
Reply | Post Message | MESSAGES LIST | START A BOARD

mhhfive 8/1/2017 | 6:57:04 PM
Re: Whitman I assume Whitman was courted.. and she declined. And then, Uber thought it might be okay to let that leak to see how the rumor mill would react to future candidates. Esp since Whitman wouldn't be a great fit. It's probably a decent tactic to test the waters for who they can get to steer Uber next....
Reply | Post Message | MESSAGES LIST | START A BOARD

[email protected] 7/31/2017 | 3:12:32 PM
Re: Whitman Susan there are only two people that know the truth Meg and Uber. Maybe they courted her and she declined and the rumor mill took off you know how quickly that can happen.
Reply | Post Message | MESSAGES LIST | START A BOARD

Susan Fourtané 7/31/2017 | 2:33:10 PM
Re: Whitman Maryam  Judging for what she said, which is the only thing I believe, I dont think she interviewed. There are many things that one can hear. And there are many other things that people can suppose or make up.
Reply | Post Message | MESSAGES LIST | START A BOARD

[email protected] 7/31/2017 | 2:25:07 PM
Re: Whitman Susan, exactly I think people assumed her shuffled responsibilities were a sign she was leaving. I think the two issues are independent HPE still has a lot of work to do and shifting some key responsibilities is part of making the company more nimble. Though, if she actually interviewed she can't be that committed!
Reply | Post Message | MESSAGES LIST | START A BOARD

Susan Fourtané 7/29/2017 | 5:43:59 AM
Re: Whitman Maryam  Here is what she personally said a day ago: Normally I do not comment on rumors, but the speculation about my future and Uber has become a distraction. So let me make this as clear as I can. I am fully committed to HPE and plan to remain the company's CEO. We have a lot of work still to do at HPE and I am not going anywhere. Uber's CEO will not be Meg Whitman.
Reply | Post Message | MESSAGES LIST | START A BOARD

[email protected] 7/28/2017 | 2:03:56 PM
Re: Whitman Susan, I think the confusion is stemming from reshuffling her responsibilities. She is on the market regardless if she is talking to UBER. If all was rosy at HPE she would not be considering outside offers.
Reply | Post Message | MESSAGES LIST | START A BOARD
Page 1 / 2   >   >>
EDUCATIONAL RESOURCES