NBCUniversal said Monday the completely free version of its new Peacock streaming service will limit access to the first two seasons of The Office when it secures exclusive rights to the show starting January 1, 2021.

It's a clear signal that NBCU will be pushing the premium, paid forms of Peacock heavily in 2021 as The Office leaves Netflix behind. Those Peacock premium tiers – $4.99 per month with ads and $9.99 per month without ads – will have access to all nine seasons (201 episodes) of The Office plus some exclusive, bonus content associated with the show.

"Despite our repeated requests, Dunder Mifflin employees will not receive a discount," reads a jokey memo mock-up from David Wallace, the fictitious CEO of the fictitious paper company, used to announce Peacock's distribution plans for The Office. 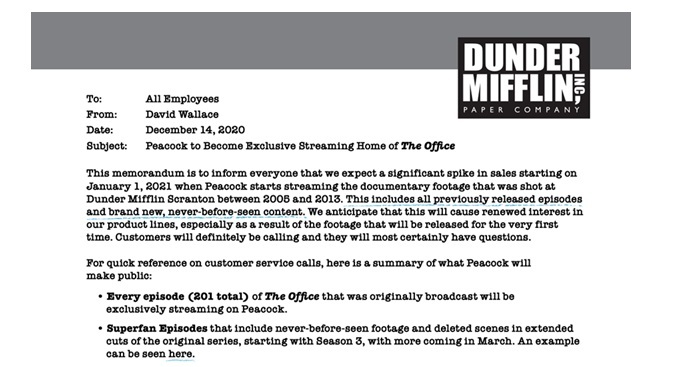 Click here for a larger version of this image.
(Image source: NBCU)

Per that same announcement, Peacock's premium tiers will provide "Superfan" episodes that include some never-before-seen footage and extended cuts with deleted scenes starting in March 2021.

Peacock is betting that exclusive access to The Office will draw interest and signups for Peacock and goose usage for the streaming service after the series proved to be one of the most popular titles on Netflix. NBCU is reportedly paying $100 million per year over five years for exclusive rights to the series.

Peacock's tiered distribution model will give free users a taste of The Office in the hopes that they'll upgrade to a paid, premium option.

The move could also protect Peacock's connections to the pay-TV universe, as Comcast, which owns NBCU, and Cox Communications currently offer the ad-supported, premium version of the streaming service for no added cost, Rich Greenfield, analyst with LightShed Partners, told Bloomberg. "They're protecting the pay-TV universe that Peacock is tied to. It's added value for being a Comcast or Cox subscriber," Greenfield told the outlet.

It's not clear how offering The Office in an ad-supported streaming environment on Peacock will alter consumption of the show following a completely ad-free run on Netflix. "It will be a really great test," Greenfield added.

Following its early preview on Comcast, Peacock launched nationally on July 15. Signups have crossed 26 million, NBCU CEO Jeff Shell said last week at the UBS Global TMT Virtual Conference, but he did not break down how many of those signups were taking the free or premium forms of the streaming service.