CABLE NEXT-GEN TECHNOLOGIES & STRATEGIES  Standards are still being finalized, but suppliers and cable operators alike expect the first Generic Access Platform (GAP) nodes to be ready for commercial deployment in 2022.

GAP, an SCTE/ISBE-led standards initiative started more than two years ago, aims to provide cable operators with standardized node housings that can support a blend of snap-in service modules and edge compute capabilities. Ideally, GAP nodes will enable cable operators to step away from a legacy platform that is comprised of a wide array of purpose-built and vendor-proprietary nodes and toward a multi-vendor, best-of-breed environment that will open up the market and spur innovation among suppliers. 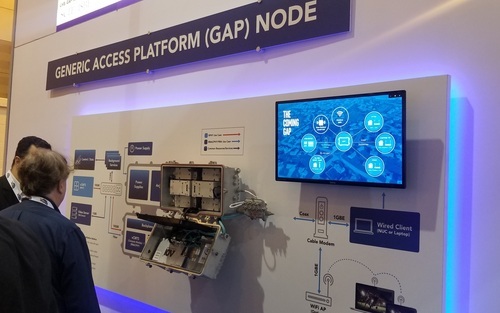 The first waves of GAP nodes are expected to focus on DOCSIS remote PHY or remote MACPHY modules that will play a critical role in the migration toward a distributed access architecture (DAA). Future modules will power other access technologies, including PON/FTTP and mobile/wireless, and generally help to fuel the cable industry's broader network convergence initiatives.

Charter to vendors: The sooner the better
SCTE/ISBE and its partners expect to use the rest of 2020 and perhaps part of 2021 to complete the standards, Chris Bastian, CTO and SVP of engineering at SCTE/ISBE, said last week on a panel focused on the GAP initiative.

That should set things up for vendors to accelerate development of GAP hardware and software later in 2021 and have a commercial GAP node ready by sometime in 2022. But the pressure is already on vendors to work even faster.

Charter Communications, one of GAP's champions, would like to have those products in hand even sooner as it continues to update existing plant and build new networks elsewhere.

"I'm hoping it's sooner" than 2022, said John Williams, VP of engineering and architecture at Charter. "We do so much new build on an annual run rate that, basically, anything that we deploy today is considered a legacy device if it's not the GAP. The GAP is our move forward We'd like to see this get out there sooner than later."

By this time next year, Williams hopes to have an "engineering build" of a GAP node to show. "I think we're making good progress," he said. "It's going to pay off for us once we get it out there."

Integration challenges and opportunities
The vision for GAP involves multiple vendors playing together  from the node enclosure to the on-board compute and powering and the service modules themselves. However, the initial batch of GAP nodes is likely to come from a sole vendor, Bastian acknowledged.

In anticipation of that broader, multi-vendor focus, the GAP working group is already discussing a certification testing process that would likely involve a third party and perhaps follow the kind of testing model established by CableLabs. GAP's multi-vendor focus could also open up opportunities for systems integrators.

"We're working within the group to figure out who handles that testing," Bastian said. "CableLabs has very much been participating in the entire process."

The integration and fulfillment aspects of the GAP project represent both a challenge and an opportunity, explained Jay Lee, chief technology and strategy officer at ATX Networks. "There's potentially an opportunity for a vendor to jump in the space as a GAP integrator  looking at how various application modules play with the GAP platform."

While a GAP enclosure is made by one vendor, it's likely that the node itself will be comprised of products and technologies from several other suppliers. That also means that the overall device will need to be certified to show that a module from one supplier is not creating issues for another and that the collective products and technologies packed into the GAP node are capable of staying within the standard's heat dissipation thresholds.

That multi-vendor scenario also opens up the question of who among the suppliers and operators will take ownership of a GAP node's compliance with the standards, particularly between the service modules themselves.

"That's one of the challenges that we're still figuring out," Williams said. "When you start connecting [multiple] vendors in there, you have to certify the devices so that one device doesn't create issues for another device. Heat dissipation is a big part of it  We're looking to dissipate more heat than any housing ever has before."

Will vendors follow the money?
Another question is how motivated suppliers of legacy nodes, such as CommScope, will be to participate in the GAP market. They have valuable turf to protect, after all.

Panelists believe that operator commitments to the project will spur action among the entire node vendor community.

"I see it as a snowball effect," Bastian said. "Vendors typically follow the money."

Charter's Williams believes those suppliers will have additional motivation, particularly in areas such as product development and operations, because vendors today are forced to develop technology for multiple lines of node products. As the GAP era unfolds, that process could become greatly simplified and more efficient for suppliers.

"If you get to a single development platform and you take out the piece where there's no money in it, which is the housing, and you just build to that, I think that's a good business model," Williams said.

Modular GAP nodes are expected to carry a premium price over legacy products, but installing a future-proofed platform that will need to be deployed once and updated with service modules represents the "real payback," Lee said.

With GAP, Charter is sizing up opportunities around flexibility and sustainability, aiming to vastly reduce the time and expense it's traditionally required to swap in and swap out purpose-built, proprietary nodes.

"We're looking for flexibility, so that once we put the GAP [node] in, that's the last housing we'll ever put in," Williams said.

Looking beyond North America
The first waves of GAP nodes are focused on form-factors/enclosures tailored for the North American cable market and, to a lesser degree, the Latin American market. However, it's expected that GAP will also evolve to support cable systems in Europe and other parts of the globe.

GAP's interfaces for modules and the management interfaces could be applicable to other markets with lower thermal capacity and smaller enclosure sizes, Colin Howlett, CTO of Vecima, said. Vendors could go through another standards process with slightly different GAP nodes, he adds.