Aided by an acceleration of self-install capabilities along with a surge of new customers coming through temporary, free offers during the COVID-19 pandemic, Charter Communications tacked on 563,000 residential broadband customers in the first quarter of 2019, well above the 398,000 added a year earlier.

Charter also expanded its mobile subscriber base and saw video losses actually improve in the quarter. 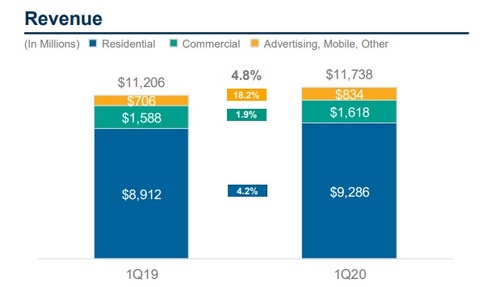 Prior to the pandemic, self-installs represented about 55% of overall sales, and have since eclipsed the 90% mark. Chris Winfrey, Charter's CFO, estimates that the cost of a self-install is about a third less than a professional installation.

Charter also provided some granularity on the effects of a COVID-19-driven offer to provide 60 days of free Internet to students and educators that previously did not have service from the MSO. About 119,000 of the quarter's total net broadband adds came through this program.

Notably, about half of those new subs signed up for additional products, such as video and phone, with immediate billing, and few taking Charter's low-income broadband product, Rutledge said. He said Charter is hopeful that the additions of other services is a good indication that those customers coming in through the program will remain after the free broadband period.

Charter also offered some data on the results of FCC Chairman Ajit Pai's "Keep Americans Connected Pledge," which includes a provision not to disconnect customers who can't pay. About 140,000 residential customers took advantage of that program as of March 31, though 25% of them now have current balances and nearly half have made partial or full payments. By the end of April, about 65,000 had past-due balances beyond the point of normal disconnection.

Like other cable operators, Charter has seen a big increase in peak network usage, particularly in daytime hours, during the pandemic as millions have stayed at home to work and go to school. Residential data usage for Internet-only customers in Q1 2020 averaged more than 600 gigabytes per month, a 20% increase from the fourth quarter of 2019.

"We've been able to handle the very quick change in demand," Rutledge said, "We've absorbed a year's worth of [network capacity] augmentation in a few weeks."

He also isn't overly concerned about the pandemic's impact on the upstream amid greater usage of apps such as video conferencing. "We don't have an immediate upstream problem," Rutledge said.

Video
Charter lost 70,000 residential pay-TV customers in Q1, improving on a loss of 152,000 subs in the prior quarter. Charter ended the period with 15.55 million residential video subs.

He also weighed in on the high costs of sports programming, which are coming into increased focus during the pandemic. Most notably, New York State Attorney General Letitia James made a plea earlier this week for pay-TV providers to trim subscription fees while no sports are being televised.

Rutledge estimated that Charter pays about $60 per month in average wholesale costs per sub on sports programming. "Sports is the major driver in the cost of content," he noted. Under current conditions, Charter believes it would still have to pass through its sports programming costs even if live events events don't occur due to the pandemic, holding that the company's hands are tied because a lot of sports network deals are bundled tightly with other deals.

"We have a structure on how we pay for content. We have little control of it contractually," he said. "We would like to see our customers relieved if they can be."

Mobile
Charter, which launched Spectrum Mobile nationwide in the fall of 2018, added another 290,000 mobile lines in Q1, expanding the total to 1.4 million lines. The operator managed to make those gains even as demand slowed in March, partly because of store closures.

Rutledge also noted that Charter views the opportunities emerging with 6GHz (for Wi-Fi) and 3.5GHz (for CBRS) as separate, regarding 6GHz as a good in-home technology and CBRS as one that can aid Charter's plans for mobility as well as fixed wireless.

Business services
Charter pulled in total commercial revenues of $1.6 billion in Q1 (including $996 million from small and midsized businesses and $622 million from enterprise customers), versus $1.58 billion in the year-ago quarter.

Charter saw SMB sales soften in the back half of March due to lockdowns, as its entire direct sales force has been put on hold. However, the company estimates that less than 20% of its SMB customers include restaurants, hotels, bars and theaters that are being hit hard by the pandemic.