Deutsche Telekom's Americanism might not pay off for Europe

Deutsche Telekom's senior executives have not yet acquired transatlantic accents, put the Stars and Stripes in the company logo or begun sporting baseball caps, but the German phone incumbent looks more American each day.

If there were a company equivalent of the genealogical DNA test, Deutsche Telekom would be 62% Washingtonian, based on the composition of its first-quarter earnings.

The T-Mobile US "subsidiary" headquartered in Bellevue contributed more than 5.7 billion (US$6.9 billion) of Deutsche Telekom's 9.2 billion ($11.2 billion) in underlying earnings, an 81% increase on last year's number.

Fattened by its takeover of Sprint, US sales were up 62%, to 16.5 billion ($20 billion). But even if T-Mobile and Sprint had remained singletons, sales and earnings would have risen 7.1% and 8.3% respectively, said the company.

The contrast between its dazzling US growth and the plodding performance elsewhere could be a metaphor for American dynamism and European decline. It is not that Deutsche Telekom is doing badly in Germany or Europe compared with its rivals. Revenues and underlying profits were up in Germany at a difficult time, and earnings increased slightly across Europe despite a slight dip in sales.

But it was thanks to the US that total earnings rose 41%  while sales grew 32.3%, to around 26.4 billion ($32 billion)  compared with the year-earlier period. Minus the US, Deutsche Telekom looks far from exciting, with earnings up 5% and sales by just 1%.

That T-Mobile US has been able to sustain its performance after a merger with a spectrum-rich but sputtering rival is testament to the marketing brilliance of John Legere, a former boss who looked more rock band roadie than corporate stiff, and his successor Mike Sievert, a dead ringer for a middle-aged Harry Potter.

In a couple of years, if not sooner, it will probably be the largest US mobile operator (it has already overtaken AT&T and is closing the gap on Verizon). 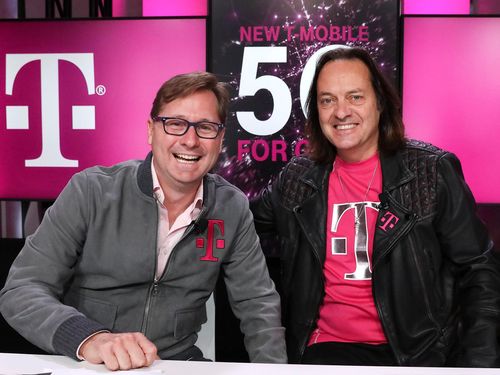 But it makes for an increasingly awkward comparison with the Olde Worlde. For one thing, it has delivered that performance with roughly the same number of mobile customers that Deutsche Telekom counts outside the US  about 103 million in the states versus more than 101 million elsewhere  but without the 22 million fixed broadband subscribers Deutsche Telekom serves in Germany and Europe, or the T-Systems IT unit it operates for business customers.

It has also done it with less than a third of the group's employees. Despite an earlier promise that it would create jobs, T-Mobile had whittled down its headcount to 75,000 workers at the end of 2020, from 80,000 at T-Mobile and Sprint combined in 2019.

Deutsche Telekom's latest earnings report shows there are 71,353 full-time employees in the US out of a total international workforce of 224,385. The disparity last year meant T-Mobile made about $912,000 in revenues for every employee. At Deutsche Telekom, including T-Mobile, the figure was just $530,000.

Such is the burden of life in a more heavily regulated European sector awash with telcos. His observations of the US telecom sector have made CEO Timotheus Höttges a harsh critic of Europe's rulemaking and antipathy toward mergers.

The region's policymakers should take note: The boss of Europe's largest service provider knows that investing in the US is a safer bet than spending money closer to home.

And the US is where most of Deutsche Telekom's capital expenditure now goes  a whopping 86% of the 12.3 billion ($14.9 billion) it spent in the first quarter. Yes, that included a massive $8.9 billion outlay on US spectrum licenses, but payment was settled with none of the curses that were muttered when Deutsche Telekom spent 2.2 billion ($2.7 billion) on 5G licenses for Germany back in 2019.

Even if the entire 8 billion ($9.7 billion) that Deutsche Telekom splashed on spectrum in the first quarter were deducted from the US amount, T-Mobile would account for nearly 60% of group capex and have spent 48% more than it did a year earlier. On this basis, T-Mobile made about 4.3 billion ($5.2 billion) in basic earnings minus capex, against just 2 billion ($2.4 billion) for the rest of the company.

Deutsche Telekom could not easily be accused of neglecting its non-US operations. Last year, for instance, it pumped about 4.2 billion ($5.1 billion) into cash capex for its German telecom business.

At roughly 18% of German sales, that is a more sizable contribution than many European operators make and much more than Deutsche Telekom was spending under Rene Obermann, its former CEO. Its 5G network today covers 80% of Germans and will reach 90% this year, says the company.

Yet spending on German telecom dropped 18% in the first quarter, to 860 million ($1 billion), and Christian Illek, Deutsche Telekom's chief financial officer, does not expect total investment in Germany to rise this year.

"Why? Because at present we don't have the capacity," he told reporters via translation on today's earnings call, promising a future boost. "In the coming years we will be continuously increasing that figure. This year we are between 5.5 billion [$6.7 billion] and 6 billion [$7.3 billion] in investment."

With its ballooning debts, Deutsche Telekom would clearly struggle to spend more in Germany and Europe while it is still running a 5G buildout race in the more lucrative US market.

Thanks to the Sprint acquisition and US spectrum fees, its net debt has soared to nearly 130 billion ($157.6 billion), about three times what it makes in annual earnings and 50 billion ($60.6 billion) more than Deutsche Telekom's current market value. Interest charges and financing costs have chewed into net profit, which fell 6.5% in the quarter, to 1.2 billion ($1.5 billion).

Investors can apparently shrug this off. Deutsche Telekom's share price was up 2.7% in Germany at the time of publication and has gained 23% in the last year.

But policymakers are unlikely to be as upbeat. In several countries, including Croatia, Germany, Greece, Hungary and Romania, Deutsche Telekom is either the controlling or a major shareholder in the former state-owned monopolies. And the telecom infrastructure in some of these markets is hardly state-of-the-art.

In fact, even in Germany, the operator's full-fiber network reaches only 2.3 million of the country's 41 million homes. That means Deutsche Telekom is now a long way behind BT. Previously regarded as another of Europe's gigabit laggards, the UK incumbent had extended full-fiber networks to 4.1 million of roughly 28 million homes by the end of 2020.

If Deutsche Telekom's US success has come at a cost, the danger is that Europe pays the price.